Marking six months since the ceasefire in Gaza, 30 international aid agencies joined together to issue a statement titled, "We must not fail in Gaza." At face value, this warning is a responsible step by credible international humanitarian and development actors. Yet, a deeper reading reveals that the statement is neither candid nor wholly truthful. How can we solve the appalling conditions in Gaza or elsewhere if aid actors actively participate -- including through this statement -- in mystifying the public about what is really going on and where responsibility lies?

Accountability cannot be achieved without honest, critical, constructive discussion about what is really happening. We must tell the whole, complex, discomforting truth, even if it leads us to conclude that "aid" isn't as helpful as we want to believe it is. 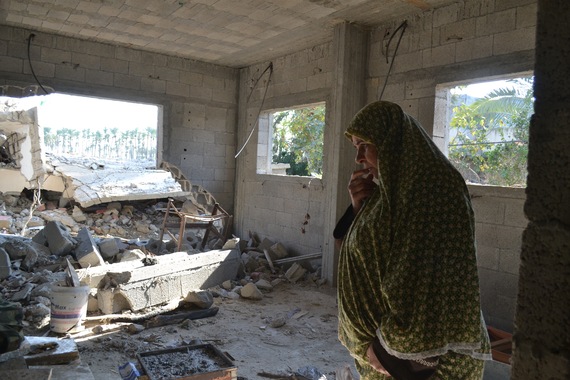 It is not wholly truthful to say, "We must not fail in Gaza" when we have already failed in Gaza. Nearly 2 million people remain essentially imprisoned under military occupation in one of the most densely populated areas of the world. The international community has legal, moral, and professional obligations to hold Israel accountable for these and other violations against Palestinians, but it does not do so. Admitting failure could allow aid actors to stop investing intensive efforts and massive resources in a flawed system. It could open up discussion leading to radical change.

It is not wholly truthful to say 100,000 Palestinians remain displaced when there are nearly 7 million Palestinians displaced. Like other oft-repeated statistics, the number "100,000" actually hides the bigger picture. This number does not include those still displaced from the last Gaza war in 2012; and it does not include those without homes because the Israeli blockade bans sufficient materials to meet the natural growth in demand for housing. It certainly does not include the total number of Palestinians who are not home because they have no homeland. Confronting the problem holistically could allow aid actors to extract themselves from complicity.

It is not wholly truthful to say that the international community is not providing Gaza with adequate assistance because little of the $5.4 billion pledged in Cairo has reached Gaza, as if Palestinians are merely entitled to compensation for recent war damages. In fact, the international response is inadequate because "aid" is offered as consolation for 67 years of statelessness. In fact, decisive political intervention is the only way to achieve a long-term solution.

The recent statement by aid agencies is written in the sophisticated, passive language for which the aid system has become known:

The Israeli-imposed blockade continues, the political process, along with the economy, are paralyzed, and living conditions have worsened. Reconstruction and repairs to the tens of thousands of homes, hospitals, and schools damaged or destroyed in the fighting has been woefully slow.

So how can United Nations agencies and tens of international non-governmental organizations declare, "...we are alarmed by the limited progress in rebuilding the lives of those affected and tackling the root causes of the conflict" as if they were mere bystanders?

We must do better! Rather than blame others and plead powerlessness, every one of us, in every sector -- public, private, international and local -- should reflect honestly about the role we play in maintaining this failed system. We must summon the courage to risk change.

Here is the text of a statement those same agencies might have published had they been willing to speak truthfully. (These are sentiments already whispered in the back rooms of most agencies working in Palestine.)

The Joint Statement by Aid Agencies That Should Have Been Published

We have failed. The recent Gaza war is simply more proof that we, the international community, refuse to exert effective pressure to implement any of our hundreds of UN resolutions relating to the Israeli-Palestinian conflict, calling into question the credibility of our commitment to a global governance system where all people can enjoy freedom, equality and basic rights.

"Aid" has not been an effective tool to offset or mitigate this failure. Taking Gaza as one of many examples, we have accepted funding on behalf of Palestinians and we have paid ourselves handsomely to achieve objectives that we knew to be unachievable within the constraints of our system. We hereby admit that the aid system should be dismantled and radically re-envisioned as a form of solidarity driven by a commitment to justice.

Because we are truly as committed to justice and the rule of law as we always claim, we intend to remain in Palestine with Palestinians until their rights are achieved. We do this as true humanitarians not as careerists, so we will not accept compensation beyond what we need to subsist by local standards.

Furthermore, we will not allow ourselves to be used or blocked. We will insist that our governments act in accordance with the Charter of the United Nations (especially Chapter seven, Articles 41 and 42) giving effect to UN decisions via economic, diplomatic and other measures.

We will rebuild Palestine so that it can be free of the need for aid: enjoying territorial integrity, with control over its own natural resources and borders, and able to receive Palestinians from around the world if they choose to become citizens.

We will do this because true help in a situation of inequality requires us to take a stand on the side of justice. We understand this will require us to take risks, but we are driven by our conscience to do what is right.

Writer of fiction and commentary in Jerusalem, Palestine