ROME -- Ahead of the European Union summit to be held in late June, the Italian government has proposed a document titled "Completing and Strengthening the Economic and Monetary Union." The document should be considered as the country's informal advice for a blueprint on EU governance that will be proposed by EU Commission President Jean-Claude Juncker, European Central Bank President Mario Draghi, Eurogroup President Jeroen Dijsselbloem and European Council President Donald Tusk.

The Italian document states that "significant advancements cannot be achieved if mutual trust and therefore willingness to share risks for the common good is not restored." To address the issue, Italy proposes the development of "an unemployment insurance scheme to smooth the fluctuations of the economic cycle" in order to "stimulate convergence of different labor market institutions and add the European dimension which is necessary to achieve successful policy coordination and provide incentives for national initiatives."

Risk-sharing through eurobonds -- government bonds issued jointly by the eurozone countries -- has proven to be too controversial over the last few years, especially in Germany and other core euro countries, because they are considered a "moral hazard" in the periphery countries of the eurozone. The fear is that they will invite overspending and over-borrowing based on the credit rating of the stronger countries.

Why should risk-sharing through a pan-European unemployment insurance work any better? The Italian government, relying on academic studies published in recent weeks by the Bruegel think tank and the Centre for European Policy Studies has underlined a few advantages of the new proposal.

Urgency. The unemployment rate in the eurozone was still 11.1 percent in April, with big countries such as Spain, where one in four are still unemployed, and Italy where it remains at 12.4 percent, feeling the hit.

A European Unemployment Insurance plan would demonstrate European solidarity in a visible and tangible way for citizens. As the Italian document reads, "It is necessary to prove the benefits for all in terms of more growth, opportunities and jobs creation of being part of an economic integrated union." With the Greek crisis still open, and populist parties gaining strength all across Europe, such an institutional strategy is crucial for winning the hearts and minds of European citizens.

Feasibility. Based on numbers elaborated by Ceps, every country could contribute to build up a fund through a contribution of 0.1 percent of its GDP; the common fund would be activated in favor of a given country only when the unemployment rate reaches extreme levels compared to historical averages. A fund of this size could cover almost half of the salary of 75 percent of unemployed people in Europe for the maximum duration of 12 months, according to Ceps.

Efficacy. The European Unemployment Insurance plan would kick in automatically when a country or region falls into a deep economic crisis. Once the mechanism is set up, it will let the funds flow automatically to those areas where they are most needed, avoiding heated political debates over and over again in EU councils. It will work as a "fiscal automatic stabilizer" in the eurozone, correcting the "pro-cyclical" stance of the continent's fiscal policy that has often criticized by analysts who argue that raising bank capitalization ratios can stifle lending during a recession.

Further, by harmonizing at least some of the conditions of workers and unemployed people across Europe, it can foster mobility and contribute to forging a true single market.

Theoretical and bipartisan appeal. Liberal thinkers, such as Princeton professor Harold James, love the welfare side of the EUI-proposal.

Pro-market thinkers, such as University of Chicago professor Luigi Zingales, prefer the boost to individual mobility that comes from the measure. Both agree on one point: although the EUI might create an incentive to some sort of "fiscal transfer," such transfer would be temporary and individually-based.

In the present crisis, funds would automatically move from core countries to the periphery when warranted. Back in the 1990s, Germany, in the middle of its own economic crisis, would have been the main beneficiary of the fund, with periphery countries being the most generous contributors. On top of that, German taxpayers would not be lending their money to the same indebted southern states permanently; funds would flow towards specific groups of people in different countries, depending on the temporary economic circumstance of a downturn. For all these reasons, the Italian government has decided to drop the unfeasible eurobonds proposal and to focus instead on a European unemployment insurance scheme.

Nothing will happen overnight. The Renzi government, as noted in its proposal, figures that "the mechanism could be financed with resources currently spent on a variety of national benefits, to be partly pooled in a common unemployment insurance fund as the adjustments in labor markets kick in and unemployment is reduced."

Clearly, what Renzi has in mind is a medium and long-term policy in order to be ready to cope with the next macroeconomic downturn. Given the fragility of a slow growth recovery at the moment, it is best to start discussing the details now. 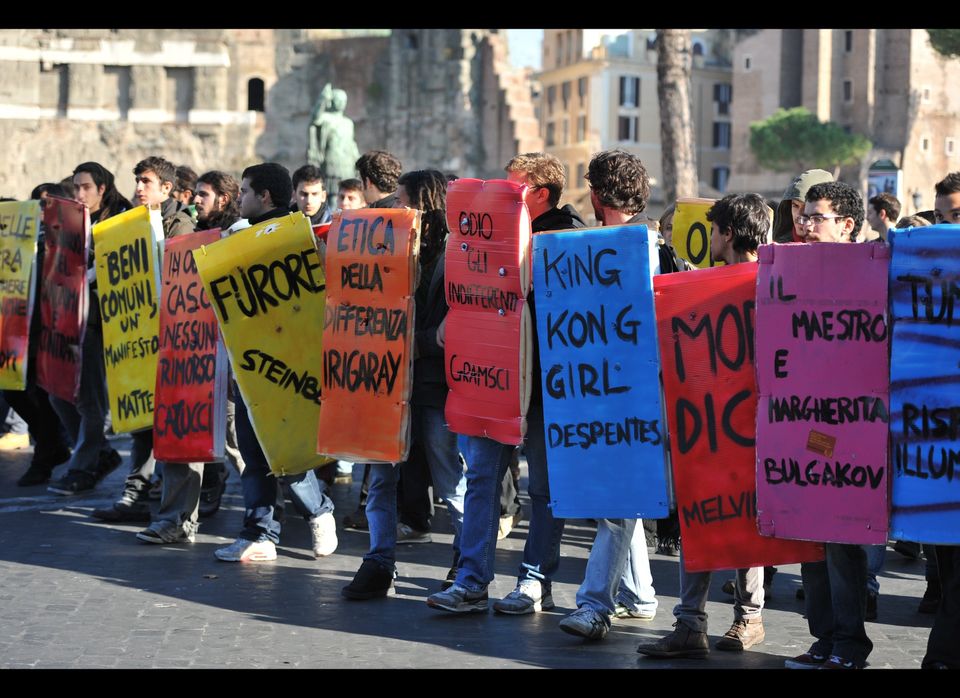 1 / 30
Students and protesters march at Piazza Venezia during a demonstration to protest against the cuts in the education budget and against the austerity measures in Europe on November 17, 2011 in Rome. Italy's new Prime Minister Mario Monti, who took office the day before, is set to unveil his economic programme, under heavy scrutiny from global leaders, financial markets and parliamentarians wary of hard-hitting reforms. Placards read titles of books. (Getty)
Getty