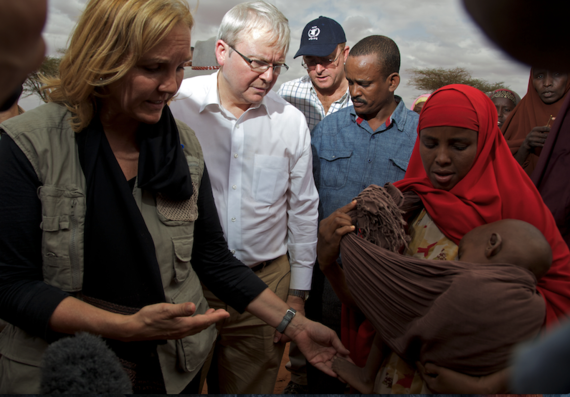 This International Women's Day it's time to #giveashit about sanitation for women.

Yes it is crass, but do I have your attention?

In the western world we tend to think toilets are a standard part of life. They are quite simply "a given."

In fact we make a lot of bad jokes about them. It is pretty core to the Australian vernacular.

The "dunny", "can", "trough", or "loo" are all easy come, easy go to us Australians. Many a toilet talk joke has been had in Oz and that will never change.

However for millions of women that live outside Australia, toilets, or their lack thereof, are a deadly serious issue.

For them, toilets are never a joke. They are a matter, at times, of life or death.

Not having access to a toilet is literally taking their lives and the lives of their children. It is an urgent situation.

Each year, more than 2.2 million people in developing countries die from preventable diseases associated with a lack of access to adequate sanitation.

Every day, a lack of clean water and sanitation contributes to the death of 1,000 children under five.

The social and environmental health costs of ignoring the need to address sanitation in the developing world are far too great.

I know it seems very far removed from life in Australia, however, I ask you to imagine, just for a moment, you have nowhere safe or private to go to the toilet.

Imagine the physical pain caused by having to hold on for many hours until night has fallen and it dark before you can finally go. Imagine limiting your food and drink consumption to reduce how often you need to go.

Imagine being terrified of having to go to the toilet in the dark because of the very real risk of being sexually assaulted.

Imagine not being able to go to school because you have no access to sanitation and the impact this has long term on the advancement of women.

Imagine having no access to clean water for yourself or for your children because the flow on effect of poor sanitation in your community means the drinking water is contaminated.

Imagine the compounding sense of the loss of dignity these women feel. It is devastating to witness.

Imagine the ongoing medical consequences for these women as a result of refusing their body the ability to go to the toilet when they need to. The incidence of urinary tract infections is very high.

Finally, imagine having to give birth in a setting where there is not safe drinking water or hygienic sanitation options.

All of this without even touching upon the harrowing facts about the deadly diseases being spread because of this daily reality for millions of women and their children in developing countries.

The horrific incidence of serious water-borne diseases such as cholera, typhoid and parasitic infections as a result of poor sanitation are killing women and children every day.

Moreover, the incidence of these diseases and others linked to poor sanitation - for example, round worm, whip worm, guinea worm, and Schistosomiasis - is highest among poor women, and especially their school-aged children.

Solving sanitation is a huge challenge and it will take time, however it is one that will transform the lives of women and children in developing countries.

It is a challenge we must conquer and through the Sanitation and Water for All global partnership, we have the opportunity to change that and that is what we are aiming to do.

And in my view, sanitation is one of the major challenges faced in overcoming gender inequalities for women in developing nations.

There have been improvements in recent years. Since 1990, 2.1 billion people have gained access to an improved form of sanitation, such as flush toilets or latrine with a slab.

This means that, in 2015, 68 percent of the global population was using such facilities -- an impressive accomplishment but still far from the 2015 Millennium Development Goal target, which has been missed by nearly 700 million people (Source: UNICEF).

This year, on International Women's Day, I ask you to spare a moment to think about how fortunate you are to have access to a safe, clean toilet and please take the time to learn more about the Sanitation and Water for All global partnership. Perhaps you could even help us to help another woman in desperate need.