Have you seen the latest James Bond movie, Skyfall? 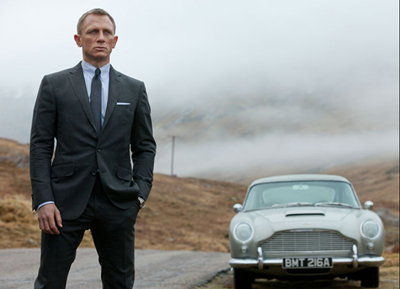 If not, I recommend this twenty-third installment in the Bond franchise. It has all the cool elements that make Bond movies Bond movies: death-defying car chases, razzle dazzle special effects, international espionage, sultry women with exotic accents who lust after James, dutiful Miss Moneypenny and the silver Aston Martin.

And the icon himself: Bond. James Bond.

In Skyfall, James finds himself thrust into another perilous predicament with a gruesome villain named Silva, whose rage against Her Majesty's Secret Service has led him to devise a dastardly plan of ruin.

He must be stopped and James, of course, is the man for the job. But wait. Where is James? He seems to have disappeared. Is he dead?

No, not that performance anxiety. Double Oh is OK in that department.

What's bugging our still handsome hunk is pure and simple middle-aged angst about losing his edge. Chalk up one more boomer whose investment is yielding diminishing returns. The man is slipping. He's still got game, but it's more like shuffleboard than high stakes derring-do.

Boomers, does this sound familiar?

A mandatory physical exam reveals the frayed edges of his physique. Those pull-ups that he used to do effortlessly? He winces with a neck spasm. Running on a treadmill? Out of breath quicker than you can say "a martini, shaken, not stirred."

And then there's his mental acuity. Has his razor-sharp cunning become just a bit duller? Can he still match wits with the new whiz kid at HQ, let alone the demonic geniuses that threaten British intel?

Well, I can relate.

My days of doing pull-ups are long gone. Actually, who am I kidding? I could never do a pull-up. I could run three miles, though, and play singles tennis. No longer. OK, I can still manage a decent tennis grunt, but that's when I bend over to tie my laces and my back goes out.

And in my profession, like most, staying competitive has become more challenging in this increasingly complex, driven, technology-focused, youth-based world. On a good day at work I'm in the mode, confident, humming along. But when things go wrong I chastise myself for the blunder and wonder whether age has something to do with it.

Like James, M is forced to confront her limitations. Accused of missing vital clues that led to the current attack on London, she vigorously defends herself to her superiors. But slowly she begins to question her judgment, mental soundness and intuition. Self-doubt eats away at her confidence.

I'm there with ya, M. My mistakes haven't led to the bombing of London, but I can sure bomb on a smaller scale. It's somewhat amusing to forget why I walked into a room at home. At work, not so much. With my memory lapses plaguing me at the most inopportune moments, I have become scrupulous about carrying my notebook everywhere so I can take notes. I just have to remember where I put that notebook.

Is it an age thing? Or are everyone's brains reaching over-capacity with data storage? Like an under-performing computer, do we need new memory? It would be nice to think a simple reboot would fix everything.

Like James and M, I'm loathe to give up without a fight. Along with millions of other boomers, I plan to keep working until I can't. And when the day comes that I concede the sun is setting, I expect James to pick me up in the Aston Martin and drive us into the sunset.