That's what James Randi has been telling psychics, faith healers and other paranormal money grubbers for more than half a century.

There is no point in calling some of them out as fakes. They're all fakes as far as Randi is concerned. It's been his lifelong quest to save the gullible public from wasting money on flimflam artists who prey on the stupidity of the masses.

The 86-year-old's amazing journey from stage magician to paranormal investigator is celebrated in "An Honest Liar," a documentary opening this month in theaters across the country, after an initial run in Los Angeles and New York. He sat down with the HuffPost Weird News team and the great Todd Robbins to talk about his amazing career. 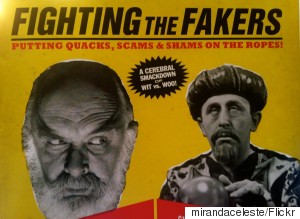 "Magicians are the perfect people to do this sort of work because we know how to trick an audience," says Randi. "We're honest liars. We tell people we're going to fool you and we do.

"The difference between us and them is we don't claim to be supernatural."

The most offensive people to Randi are people like psychic Sylvia Brown, who held herself out to the loved ones of crime victims, to help them make contact one last time with a person they lost.

In 2004, Brown told the family of Amanda Berry that she was dead. "She's not alive, honey," the TV psychic told the girl's mother, on "The Montel Williams Show."

A year earlier, the 16-year-old Ohio girl had disappeared. Perhaps it was a logical guess after all that time that Berry was dead. But in 2013 -- after 10 years in captivity in a Cleveland man's basement -- she was found alive, trying to escape.

Brown publicly apologized to Berry and her family, and then kept on doing what she had always done -- claiming that she really has a psychic gift.

Brown once accepted a challenge from Randi on national TV to prove her abilities. However, she died two years ago without following through.

"You want a million dollars, I'll give you a million dollars," says Randi. As the head of the James Randi Educational Foundation, he offers a giant cash prize to any person who can demonstrate paranormal ability.

"There should be a line out the door of gifted people wanting to collect.

"Sometimes they say they'll accept the challenge, but they never do. Want to guess why?"

Spoon-bending psychic Uri Geller and faith healer Peter Popoff are among the many Randi has exposed, showing how their stunts can be replicated with simple parlor magic.

Penn and Teller are among a generation of performers that appear in the film and they speak of Randi as a mentor. He was calling out bullshit long before they had a TV show by that name. They, too, carry on a tradition of being honest liars.