"The election of Trump is not only a tragedy for the United States," film director Jim Jarmusch announced to a small group of film aficionados at the Lisbon & Estoril Film Festival. "It is a tragedy for the world." 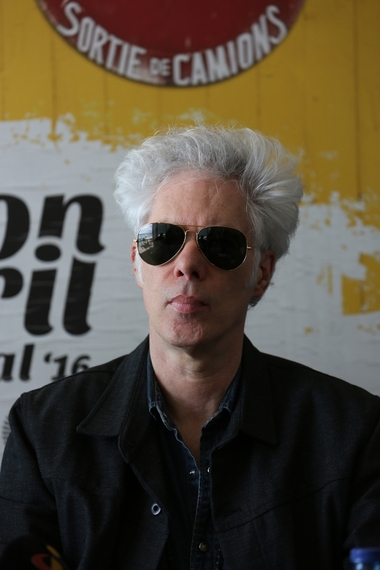 Jarmusch was here at the festival to speak about his two recently released films, Gimmee Shelter and Paterson, both of which celebrate the power of the individual to choose the way he lives his life. His arrival in Lisbon coincided with the US presidential election.

Sitting calmly, with the Atlantic ocean shimmering behind him, he continued: "I think people should be vigilant about things that have fascistic tendencies, vigilant about people like Le Pen in France, Trump in the US. It is a tragic moment that this clown has been elected. The essence of fascism is coming across and that is not a good thing."

Nothing could be farther from the insular spirit of Trump's political platform than Jarmusch's humanist poetics. Paterson tells the story of a bus driver who leads a humble routine life, enjoying his daily interactions with his beloved wife his friends, the local barman and his dog. The film is structured in seven parts according to the days of the week, and each day is pretty much the same. Throughout, our contented peaceful protagonist writes poetry.

The early Jarmusch films also give witness to deeply interior characters who face existence with deadpan wonder and persistence. I personally enter a meditative trance when watching them.

I asked Jarmusch how his meditative poetics have evolved since his earlier films, such as Deadman (1995).

"Both Deadman and Paterson are circular and cyclical in form," the director said decisively. "[They take up] the metaphor of life as a cycle. It's all about acceptance, beginnings and ends, the journey."

Jarmusch, who began his artistic career as a poet, elaborated:

" Mine are minimalist forms, not dramatic, In Paterson, incidents and details are simplified in the form. There is an accumulative effect. One is to be looking at the details, not at the story-line. I avoid drama and conflict. Paterson is a simple depiction of seven days and a strict routine. It is this routine that allows the character to be free. He drives a bus, he gets up a the same time in the same place."

The director noted with a laugh that he knows he is going against the screenwriting cardinal rule to have "conflict" at the center of a film.

"My films are closer to those of Ozu and Bresson. The essence of their films is not darkness or drama, but balance. There are lots of films being made about problems, about people not getting along, about women being abused, and these films are valuable. Mine aren't like that."

The balanced approach extends to the making of the film. "On my film set, there was not one negative moment," Jarmusch noted with appreciation. "It was pleasurable to collaborate."

The Lisbon & Estoril film festival is renowned for inviting celebrated filmmakers, intellectuals, artists and cinephiles from all parts of the globe to enjoy low-key intimate exchanges about art in a relaxed environment, where one is just as likely to attend a dinner with Monica Bellucci as chat with Jonathan Demme over breakfast. I was not surprised to see Jim Jarmusch here. I had had a lively conversation last year with Jarmusch's wife, director/producer Sara Driver, who had come to present her work-in-progress, and she had told me how she and Jim had loved the similarly warm intimate atmosphere of a film festival they had attended in Portugal, many years ago, in Figueira da Foz.

It too had been a genuine exchange between passionate artists.

She had added with a smile: "That's the way film festivals were back then. That's the way the Lisbon & Estoril Film Festival still is."

Jarmusch commented on the Lisbon & Estoril festival, his second time back to Portugal:

"My films are an antidote to drama. This festival is an antidote to festivals as a business: to film as a business. Already in a couple days, I have talked and sat down twice with Jean Pierre Leaud. Wow! Then there are the retrospectives of the films of Godard, Kusturica.... The whole atmosphere is celebrating the joy and beauty of film. What a relief, what an amazing place to be."

An enclave far from the Trump maddened world.