Growing up, my tough-guy WWII vet dad -- who was perpetually digging under the hood of his Ford pickup, or hammering away at some home improvement -- was anything but a cuddly guy.

He had true grit like John Wayne and seemed as powerful as Mohammed Ali.

To me, at 7 years old, Marty was a man to reckon with.

My Yiddish mama, who force-fed us third helpings of dinner and clutched her children to her breast every time we got a bruise, was the doting hen. Dad was the disciplinarian.

At least it gave him a chance to talk.

You see, my father never got in more then a few words when Mom was alive. She chattered away his airtime. When he did speak, he mostly spoke in grunts, or what I call "Marty Talk."

"MMMM," meant he wanted more of whatever he was eating, which he almost always did.

"Shaaaaap," was his abbreviation for SHUT UP!, which later on dwindled down to "shaaaaa!"

It astounds me that a softer man with the ability to speak entire sentences, sometimes two or three, has emerged in Dad's twilight years.

He is 88 years old and lights up like the 4th of July when I visit.

"There's my beautiful daughter who never forgets me!" he announces.

Granted, a lot of that joy revolves around the fact that I bring him his favorite treats when I visit: kosher hot dogs with sauerkraut and mustard, Chinese vegetable egg rolls with that sweet red sauce dip he loves, dairy-free apple turnovers from the kosher bakery and the piece de resistance, dairy-free ice cream for my ice-cream-loving, lactose-intolerant dad. "Thank you, Tofutti!"

Old friends can't believe how attentive I have become to my father in the last few years, the first years of his life that he let down his guard and invited me in.

"How can you be so nice to him, when he was anything but to you?" they ask.

I can only say that every time I make him laugh, it's like going back in time and giving a high five to the runaway teen I was.

The gift of these last few years with Dad are what a pal of mine calls "the long goodbye."

Oh, it's not all sunshine and butterflies with Dad. He is an old, cranky, demanding geezer. I accompanied him on a bus trip with some of his fellow residents from assisted living to see a photography exhibition of photos taken just after super storms like Hurricane Sandy, for which I had a first row seat.

Five minutes into the documentary that was captivating his neighbors and me (Hey, Brad Pitt was in it for his work rebuilding homes after Katrina), Marty yelled, "I'm bored with this! Get me out of here!"

But I find that between Marty Talk and downing kosher hot dogs without chewing (by the way, yech), I am learning from him.

"Do you have any regrets?" I asked him recently.

I thought of all the times my girlfriend asked if we could go to Italy. There never seemed to be a right time to get away. There was always some obligation that felt more time sensitive.

That night, I said, "Honey, we need to plan that trip!"

We went, and it was fabulous. Thanks, Dad. I just needed a little push.

It didn't take much -- $39.95 at Target -- and I was able to present to him that exact watch he missed so sorely. For five fantastic minutes, Dad was awestruck by me.

Then, of course, he started demanding egg rolls, but you know, those five minutes were sublime.

I think of J.K. Simmons' Oscar speech for Whiplash when he said, "Call your mom, call your dad. If you're lucky enough to have a parent or two alive on this planet, call 'em. Don't text."

If a former runaway teen with decades of anger and distance and thousands of miles between her and her father could find her way back to a lonely old man in a wheelchair finally ready to talk to anyone who wants to listen, anyone can bridge the gap.

Don't hold a grudge. Call your parents. Life is so short. 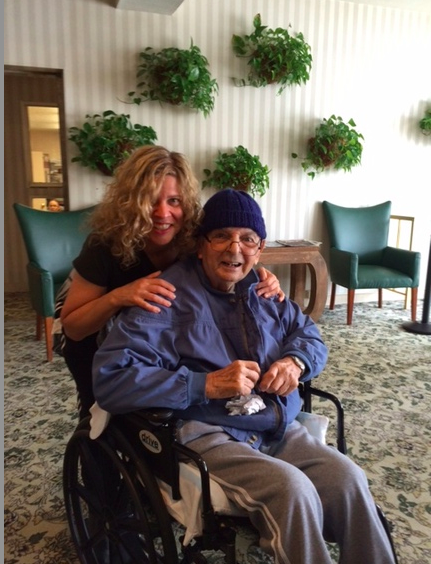