I went to the woods because I wished to live deliberately, to front only the essential facts of life, and see if I could not learn what it had to teach, and not, when I came to die, discover that I had not lived.
Henry David Thoreau

With record numbers of young Americans entering colleges and universities every year, many people are raising concerns about the employment prospects for an entire generation, the Millennials. This summer Newsweek reported that they made up a whopping 40 percent of the unemployed population -- despite the fact that many of them carry degrees beyond what their parents needed to secure a promising job.

But poor job prospects and postgraduate careers are only part of the equation. Data now suggests that the majority of students are graduating with debt -- and too much of it since the average graduate carries $35,000. And that's why many young people are turning to alternative means -- not just to survive, but to thrive.

After leaving Dartmouth, William Imbert decided to follow an untraditional path. He took odd jobs and practiced a little busking on the streets of Manhattan until a job offer took him to Beijing. His story is one of rejecting the easy for the difficult -- and of collecting invaluable lessons and stories at every turn. He has experienced dreary moments alone in the street, only to be inspired to try something new and entertain people along the way.

The act of performing for an anonymous public is not a new practice -- but it remains a very personal one in which few people flourish. But William stands out because he has persevered in staying true to his passions while building a one-man enterprise and still managing to pay off his student loans. 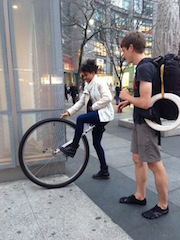 Steve Mariotti: What was your first stint as a street performer?
William Imbert: I was 24 years old and on my own in a foreign land. I began doing street performance and living by the beach for $80 a month. A typical day meant going to the neighborhood monastery, gathering random kids and passers-by for juggling lessons and games, building bonds with local kids, practicing hardcore juggling, and learning how to climb telephone poles. I also worked teaching students English one on one, along with part-time gigs at local English and music schools.

SM: How did you earn money juggling?
WI: After my time in China, I landed in Zurich. I took my Chinese instruments and juggling equipment under a bridge which led downtown. A young lady who had hitchhiked from The Netherlands bought me a kazoo and my tips totalled 76CHF. This was encouraging and I spent the next three months performing alongside Lake Zurich.

While in Zurich I had the idea to ask local clubs for their used tennis balls. I was in luck when one club--at the top of a nearby mountain -- offered me 500 free balls. I strapped three backpacks to my bike and rode them all the way down to Zurich. I transformed those balls by filling them with sand and slapping balloons around them to recolor them -- and sold them on the streets. Nine out of ten people didn't know they were tennis balls! I also sold another 250 to a newsstand for 100 CHF. 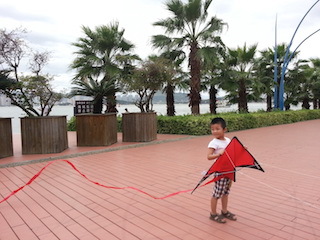 SM: Did you practice other kinds of street performance?
WI: I made some money performing near the Thames and enjoyed the NYC-style fruit bowls sold for a dollar. I played piano at the Regent's Cafe in exchange for food and got 300 tennis balls from the tennis club at Regent's Park. And with that small income, I bought my first unicycle and figured out how to master its 36" diameter wheel.

I rode it all the way out of London and to Sittingbourne -- 45 miles away -- stopping in Dartford to sleep next to a church, perform the next day, and eat snacks given to me by a kind film crew. From Sittingbourne, I traveled by train to see Canterbury made famous by the Canterbury Tales and then the "cliffs of insanity" in Dover. I figured good people and life would be in a university town so I took a train to Oxford -- where I survived by juggling and music performance.

SM: How did you get back from China -- by way of Switzerland and England -- to the US?
WI: I wanted to get a bank account and become a citizen of sorts, so at Christmas in 2013, I moved back to Princeton where my parents were living. I got a permit to perform and teach juggling on the streets of Princeton and started working with people there. One of my favorite spots was in front of the Princeton town library.

Having grown up in New York City, I always wanted to go back and spent quite a bit of time visiting from Princeton -- sometimes for three days, one time for two months. Dancing in Koreatown, riding the Staten Island Ferry, juggling on Wien Walk -- every night is wonderful. Now I am able to pay even more towards more dreams, having paid my $15,000 student loan debt. It's great to be free of it!

2) Assume rapport. When you are engaging passersby, don't ask if they'd like to participate, say something more like, "Have a try!" Getting people involved is a sure fire way to bring in tips.

3) The hardest part about running a marathon is putting on your shoes. I have met several people who speak of wanting to do street performance but there really is no better way to do it than just do it.