Jupiter, the largest planet in our solar system, has made some dramatic transformations in recent years, a new study reveals.

Huge belts in the giant planet's atmosphere have changed color, radiation hotspots have faded and flared up again, and cloud levels have thickened and dissolved, all while space rocks have been hurtling into it the gas giant, astronomers said.

"The changes we're seeing in Jupiter are global in scale," Glenn Orton, a scientist at NASA's Jet Propulsion Laboratory, Pasadena, Calif., said in a statement today (Oct. 17). Orton and his colleagues have been snapping infrared images of Jupiter from 2009 to 2012 and comparing them with amateur astronomers' visible images.

Astronomers previously observed that from 2009 to 2011, a big brown belt just south of the equator, called the South Equatorial Belt, disappeared and returned. 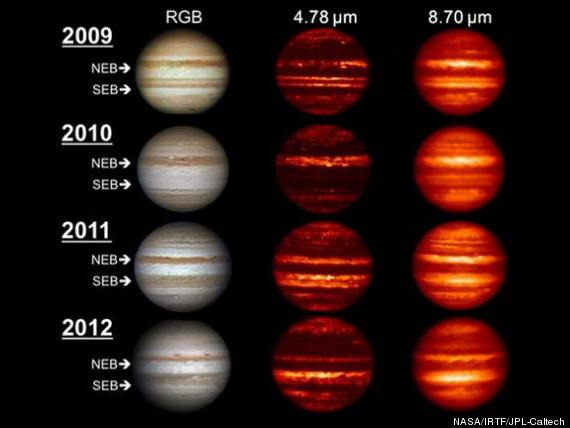 Images in the visible-light and infrared parts of the spectrum highlight the massive changes roiling the atmosphere of Jupiter. The visible-light images on the left were obtained by amateur astronomers.

Orton and his team found that in 2011 the North Equatorial Belt grew whiter than it had in a century, though it started to darken again earlier this year. And along the southern edge of this belt, the team observed infrared hotspots (which signal radiation being released from a deep layer of Jupiter's atmosphere) vanished from 2010 to 2011, but remerged by June 2012. During this period, the researchers also observed thickening of the deeper cloud decks in the northern belt, the while both the deeper and upper cloud decks of the southern belt condensed and then cleared up.

At least three space rocks, likely less than 45 feet (15 meters) in diameter, have plunged the atmosphere, creating fireballs visible to Jupiter-watchers on the ground. The most recent asteroid strike on Jupiter hit on Sept. 10, but researchers don't believe this impact will cause any long-term disturbance on the planet.

Orton said astronomers have seen some of these changes before, "but never with modern instrumentation to clue us in on what's going on."

"Other changes haven't been seen in decades, and some regions have never been in the state they're appearing in now. At the same time, we've never seen so many things striking Jupiter," he explained in a statement. "Right now, we're trying to figure out why this is all happening."

Orton noted that the appearance of upheaval on Jupiter might be attributed to a recent flood of observations by amateur astronomers.

"It does appear that Jupiter is taking an unusual beating over the last few years, but we expect that this apparent increase has more to do with an increasing cadre of skilled amateur astronomers training their telescopes on Jupiter and helping scientists keep a closer eye on our biggest planet," Orton said.

The research was detailed today at the American Astronomical Society's Division for Planetary Sciences meeting in Reno, Nev.

Copyright 2012 SPACE.com, a TechMediaNetwork company. All rights reserved. This material may not be published, broadcast, rewritten or redistributed.
Wonders Of Astronomy
More:
SpacejupiterAstronomyjupiter atmosphereNASA
Trending