Sure, the tech sectors in California and New York are bustling. But would you expect Minnesota have the third most Kickstarter-funded tech startups?

According to a trio of researchers from the University of Toronto, that's the case. Ajay Agrawal, Christian Catalini, and Avi Goldfarb explored crowdfunding's increasing popularity in a paper published this month. The most fascinating item from their work is a map of Americans' preferences on the sorts of Kickstarter projects they fund, state by state. 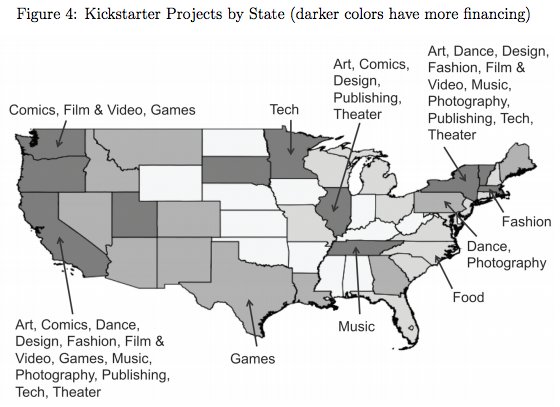 Some findings are unsurprising. California, New York and Tennessee are hot spots for music, for example. But many of the discoveries are more surprising. Texans have a tendency to invest in gaming, and Minnesota is all about tech. Pennsylvanians are interesting in dance and photography projects, and North Carolinians are preoccupied with food. Who knew Massachusetts was so into fashion? This data can give us a new perspective on America's regional quirks.