Without yet knowing the verdict in the George Zimmerman trial, we know one thing for certain: If the gun in Zimmerman's hand were not in the equation, Trayvon Martin would have walked home with his iced tea and Skittles.

The court case that opened this week has dramatically exposed the consequences -- as tragic as they are shocking -- of allowing virtually anyone to carry a concealed handgun in public. Florida is one of numerous states with extremely permissive concealed carry laws -- and alarmingly, many states have now moved to make these laws even less restrictive. Real-world examples reveal that it is disturbingly common for innocent people to meet violent deaths at the hands of those legally allowed to carry a weapon in public.

The latest report from my organization, the Violence Policy Center, as part of our Concealed Carry Killers project, reveals that the Trayvon Martin case is by no means unique. At least 516 people have been killed since May 2007 in non-self defense incidents involving private citizens legally allowed to carry concealed handguns, including 107 innocent victims who died in 24 mass shootings. In Concealed Carry Killers, we tell the stories of each and every one of these killers and their victims. 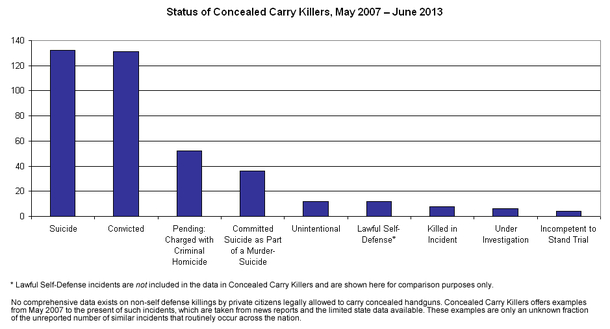 We documented 381 deadly incidents in 32 states since May 2007 in which private citizens legally allowed to carry concealed handguns killed others, killed themselves, or left their guns around to be used in unintentional fatal shootings. Because most states do not make this data available, we draw our information mainly from published news reports. It is likely that the actual number of fatal non-self defense incidents is far, far higher.

In the vast majority of these incidents (307, or 81 percent), the concealed carry killer either committed suicide (132), has already been convicted (131), perpetrated a murder-suicide (36), or was killed in the incident (8).

Of the 62 cases still pending, the vast majority (52) of concealed carry killers have been charged with criminal homicide. Four were deemed incompetent to stand trial, and six incidents are under investigation. An additional 12 incidents were fatal unintentional shootings involving the gun of the concealed handgun permit holder.

Here are just a few of the new incidents we've added to Concealed Carry Killers this month:

What do these numbers and stories tell us? It's simply a falsehood that concealed carry permits are only given to responsible citizens who won't commit crimes. With mind-numbing frequency, people legally allowed to carry handguns are using them for violent ends.

The use of firearms in self-defense -- whether the gun owner has a concealed carry permit or not -- is comparatively rare. Only 12 of the hundreds of killings detailed in Concealed Carry Killers were eventually deemed lawful self-defense (such cases are then removed from the site's ongoing tallies). And as another recent VPC study found, guns are rarely used to kill criminals or stop crimes. Between 2007 and 2011, only 0.8 percent of victims or intended victims of violent crime used a firearm to resist a criminal. Only 0.1 percent of the victims or intended victims of property crimes resisted with a firearm. In fact, a gun is far more likely to be stolen than used in self-defense.

And while one might hope that such facts would lead states to reconsider their lax concealed weapons laws, instead several states are moving to expand their reach. For example, states have recently passed or are considering new laws to allow concealed carry in public buildings, campuses and bars, and workplace parking lots.

There is already a clear guilty party in the Trayvon Martin case: The concealed carry laws that needlessly increase gun violence across the United States. Is it not enough to have 24 mass shootings, 14 slain law enforcement officers, 36 murder-suicides, and 516 people dead -- just in the small number of incidents that can be found in the limited public record? How many more victims will we have to see until we adopt meaningful laws and policies to prevent gun violence?