I am writing from Varkala, a coastal town by the Arabian Sea, located in India's south-western state of Kerala. Last weekend I was in Kochi, Kerala's biggest city, where I had an opportunity to check out the second edition of the Kochi-Muziris Biennale. Before writing about the Biennale, it is necessary to reflect on what led me there because until a month ago, I had no idea about the journey that lay ahead. 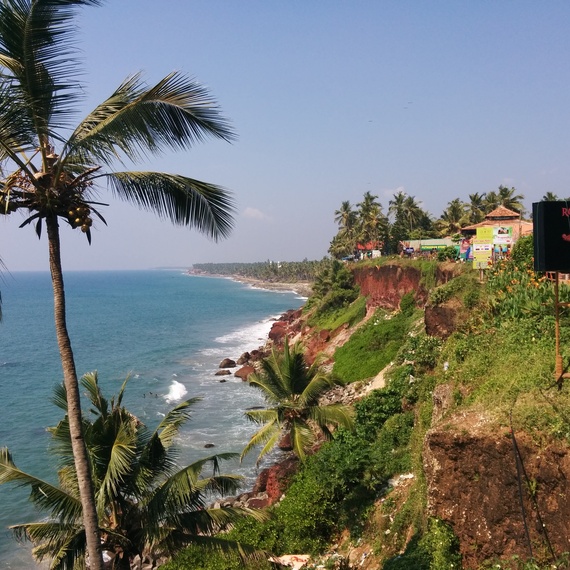 I happened to go to Kochi because I allowed myself to devote some time to idle travel. Not everyone is privileged enough to do this -- I am aware of that -- but for this blog, it is worth going a bit deeper. I was able to take this trip and to attend the Biennale because in the last couple of years, I have consciously worked hard to put myself on a path of creative endeavors and personal growth. I have taken risks, become vulnerable, and have spent many months trying to align my personal and professional interests.

My original reason for coming to India was the Jaipur Literature Festival, which is taking place later this month. During initial consultations with a Delhi-based friend, he suggested that we take off to South India for a few weeks before the Literature Festival. We charted an approximate itinerary, plugged in some dates, floated around ideas to visit certain towns and cities, but our schedule was largely flexible. It was only the morning after arriving in Delhi, while sipping tea inside the friend's apartment, that I came across an article in The Hindustan Times about the Kochi-Muziris Biennale. That led to a visit to the Biennale's website and a commitment to make a stop at Kochi.

Serendipity. Randomness. These are concepts I believe in. I also believe that so much of our lives are governed by these intractable forces. They lead us unexpectedly to small moments of bliss and sometimes, unimaginably grand discoveries. It is only a matter of creating time and space, of being aware and tuning into our intuitions, to figure out what is really meaningful, what might help us work fluidly and, ultimately, what might make us content at the end of the day. 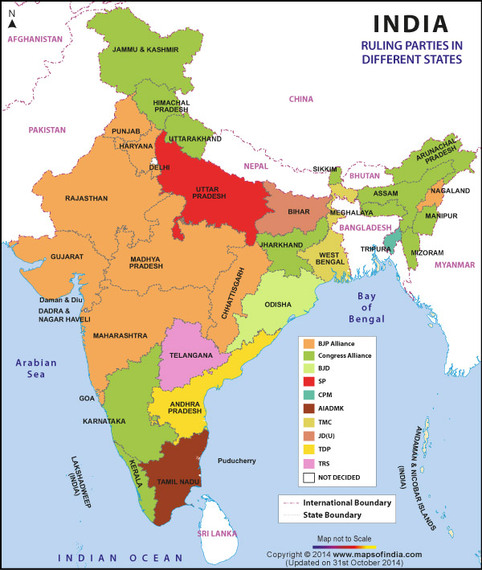 Even the trip to South India was serendipitous. I merely said yes to my friend. In fact, I only had vague notions about what South India really is like. Since I did not study Indian history in school or college, I was largely unaware of the region's language and culture, landscapes and climate, history and society. During the trip, I learned some elemental facts about this region. I learned that South India is made up of five Indian states -- Kerala, Tamil Nadu, Karnataka, Andhra Pradesh and the new state of Telangana -- along with the union territories of Lakshadweep and Puducherry. These states were created as a result of the States Reorganization Act of 1956 that reorganized British-era states along linguistic lines. Numerous languages that fall under the Dravidian family are spoken in South India, I learned during the course of this trip, but an Indian friend traveling with us specifically named the predominant language spoken in each state: Telegu in Andhra Pradesh, Tamil in Tamil Nadu, Kannada in Karnataka and Malayalam in Kerala.

Traveling affords several opportunities to learn. Memories from travel are long-lasting and enrich us in various ways. To aid this process, I usually anchor a trip by going over various regional maps and basic facts like the ones I mentioned above so that the experience is not only visually and emotionally impactful but also has cognitive benefits. To that end, the Biennale in Kochi was an integral experience that strongly stimulated my thoughts and emotions. It is not possible to go over every exhibit -- most were outstanding -- but I will briefly describe the memorable ones.

Curator Jitish Kallat writes that "two chronologically overlapping but perhaps directly unrelated historical episodes in Kerala during the 14th - 17th centuries became parallel points of departure" for his curatorial journey for the Biennale. The shores of Kochi played a prominent role in the 'Age of Discovery' that started after the 15th century. That era "heralded an age of exchange, conquest, coercive trading and colonialism, animating the early processes of globalization." Another episode taking place concurrently between the 14th - 16th centuries in what came to be known as the Kerala School of Astronomy were "steady advances in trigonometry and calculus" by astronomer-mathematicians who offered "transformative propositions for understanding our planet and locating human existence within the wider cosmos." Kallat shared these "inaugural thought coordinates" with his artist-colleagues and let the "circulation of intuitions develop a dynamic and self-generated organizing principle for the exhibition." 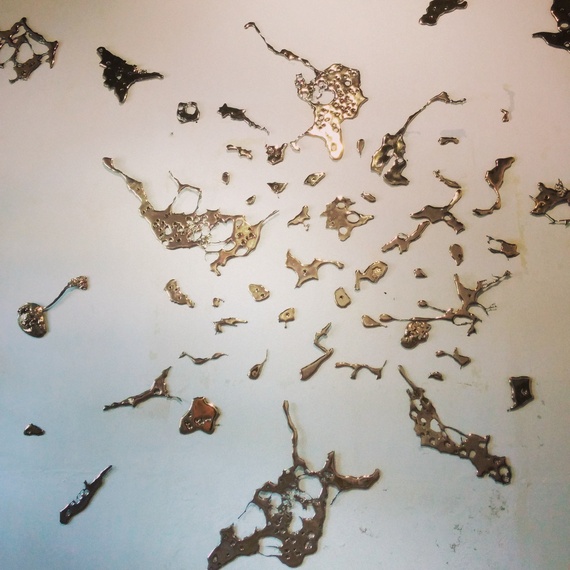 For "Heaven Over Fire (2014)," Chinese-Australian artist Lindy Lee flung molten bronze on the floor. It is a process grounded in the ancient Chinese technique of 'flung ink painting.' In this work, Lee gives a permanent, sculptural form to "a fleeting mystical moment when all of cosmos converges in an act of creation." Born in 1954 to immigrant parents in Australia, Lee's art is intimately tied to explorations of the self and to her identity. All her life, she has neither felt fully Chinese nor Australian. The power of her golden, vibrant creation, showcased on a wall situated to the right of an entrance, instantly drew me in. 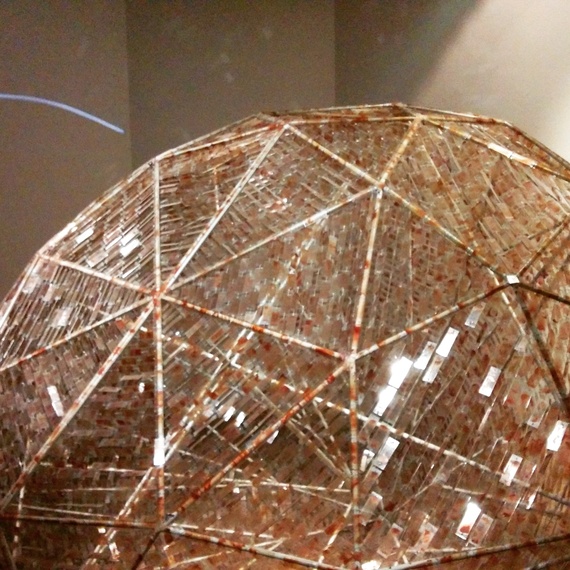 For "Artha (2014)," Prashant Pandey, who comes from a family of marble sculptors in Jaipur, assembled 10,000 discarded slides of blood (including his own) into a seductively red, translucent shape of a diamond. Pandey has juxtaposed beauty with shock. Pandey pointed out that the Sanskrit word 'Artha' refers both to the pursuit of material wealth and the quest for meaning. 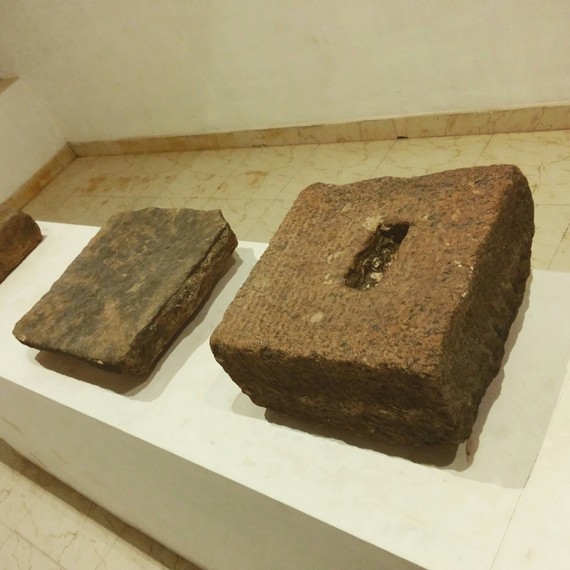 Norwegian artist Sissel Tolaas, who is based in Berlin, has created a unique, experiential project. Tolaas uses Headspace Technology - used by perfume makers to analyse and reproduce smells - to create scents that are then deployed in a variety of projects. Her work for the 2014 Kochi-Muziris Biennale, titled "Fear (2014)," is an extension of a previous project in which she created a database of sweat smells produced by 20 men around the world who suffer from a phobia of bodies. She has painted microencapsulated combinations of these smells onto the surfaces of stones collected from Kochi, many of them ballast stones that are relics of Kochi's maritime past. The stones, when touched by visitors, release the microencapsulated scents they contain, evoking undercurrents of fear and violence from Kochi's colonial past. 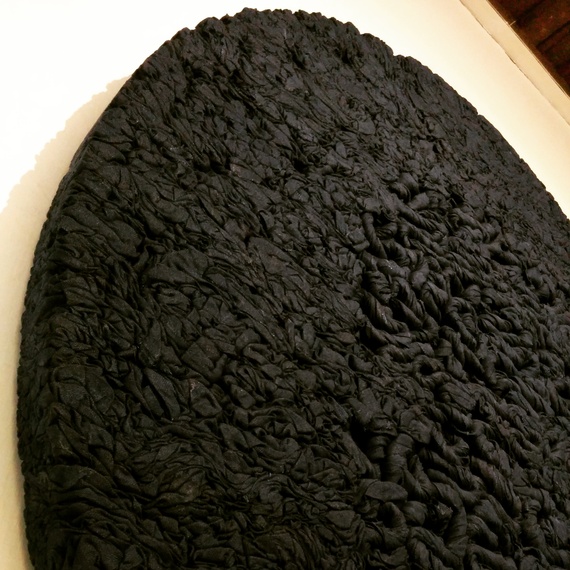 For his untitled work (2014), Manish Nai used molded indigo blue jute and turned it into a heavily compressed, circular structure that evokes associations with nature - from a whirling oceanic pool to a calm night sky. As I stood in front of this piece, I felt a surge of unknown emotions rising within me, making me teary-eyed. I don't mean to give full credit only to Nai for moving me so deeply. I know that I was responding to it all - to Kochi and its rich history, to the multitude of ideas, talents, creativity, beauty and media that culminated, suddenly, in front of Nai's work. Whorled Explorations. That's the name of this Biennale, chosen by the organizers who are well-aware of the phonetic kinship between the words 'whorled' and 'world.' When I left Kathmandu in late-December, I was unaware that I would run into this whorled exploration. I was only hoping to go on a little world exploration.

The descriptions of the art and the artists have been largely paraphrased from the exhibition handbook.