The thing about critics is they get to say whatever they want. That's their role, to criticize. So when I read a critical review of something, I understand it is an opinion.

That's fine, for as far as it goes.

But when the LA Times sends their critic across the country to take an early look at the National 9/11 Memorial that will open in just under a month, it's reasonable to expect that they'll get the facts straight.

Christopher Hawthorne, whose byline is Architecture Critic for the Los Angeles Times, makes it clear from the outset that his article isn't going to be about architecture at all -- but rather politics.

Says Hawthorne in the first paragraph:

The rebuilding effort at the World Trade Center site has been marked by enough grandstanding, backbiting and power grabs, among politicians and designers alike, to push even the most dedicated optimist toward utter cynicism.

Hawthorne then summarizes the project thus:

The central idea of (Michael) Arad's original design remains intact: to keep the footprints of the twin towers open to the sky as massive, sunken fountains. At its core the memorial has managed to preserve at least a kernel of genuine and affecting meaning.

That's certainly his point of view, and elsewhere in the article where he criticizes the "polish" of the names parapets, I can't help to wonder if he saw the same ones I did. Once the bright bronze is finished, the dark dusty grey patina at the foundry in Gardiner, NY -- they're somber and respectful, hardly polished. But that's a matter of opinion.

What concerned me more was the fourth paragraph:

Covering 7.5 acres in total, or just less than half of the World Trade Center site's original 16 acres, the memorial is the first part of the massive, many-headed reconstruction plan for ground zero to be completed. It will be joined next fall by a museum, designed by the Norwegian firm Snohetta, occupying a relative sliver of space between the memorial's twin voids.

He confuses the stunning glass Pavilion building, designed by Snohetta, with the actual museum itself that is being designed by Davis Brody Bond Aedas.

He calls the "museum" a "sliver of space between the memorial's twin voids," giving readers the impression that the museum project is being slighted or shoehorned in.

As a documentarian who's spent the past five years at the site, and stood inside the massive, cavernous, powerful museum space -- I know firsthand that Hawthorne simply misunderstood the project.

It's understandable. Many New Yorkers are only faintly aware of the scope or emotional power of a project being built under the Memorial Plaza at what was known as Ground Zero. And how could they? It isn't visible, it doesn't rise up above the city, and there's been little media attention. That's as it should be, this is the year to focus on the opening of the Memorial.

But misinforming the public isn't the job of the press.

I presumed that Hawthorne simply wasn't aware of the underground project. So I sent him a note, and suggested that he might clarify or update the article. No response. Eight hours later, I re-sent the note, this time copying the public editor of the paper as well.

Here's what I sent him:

Enjoyed your thoughtful exploration of the Memorial.

One important clarification -- the Museum pavilion is the entry point to a massive seven story underground museum that will include The Last Column, The Survivors Staircase, a number of large artifacts, and memorials of all who lost their lives.

"9/11 Museum, occupying a seven-story, 98,000-square-foot underground space beneath the waterfalls flowing into the twin towers' footprints. While the below-grade museum is designed by DBBA, its entry pavilion is by Snøhetta on the plaza"

To call a 98,000 sq ft museum a 'sliver of space' between the voids mis-represents the project -- and makes your review less credible.

While my first attempt to alert Mr. Hawthorne to the error was ignored, the second attempt -- copied to the public editor -- elicited this response:

Thanks for your email. I was referring in the piece to the above-ground portion of the museum, which does indeed occupy a (relatively) narrow parcel of plaza between the voids. I was not referring to the underground portion.

So the question is, why does it matter? It matters because Americans, and the world, are going to look to the WTC site to see how we as a nation engage and respond to the attacks of 9/11. The Memorial, as powerful as it is, is just part of that response. The Museum with the artifacts, and the stories of the individuals who perished, and the exploration of the world after 9/11 is more complex. It deserves to be reviewed carefully, and considered deeply.

In the weeks and months ahead, as the Memorial opens and the museum nears completion, there is going to be a lot written and a lot said about 9/11 and the Memorial. Everyone is entitled to their own opinions, but the facts of the project and its construction are not in debate. 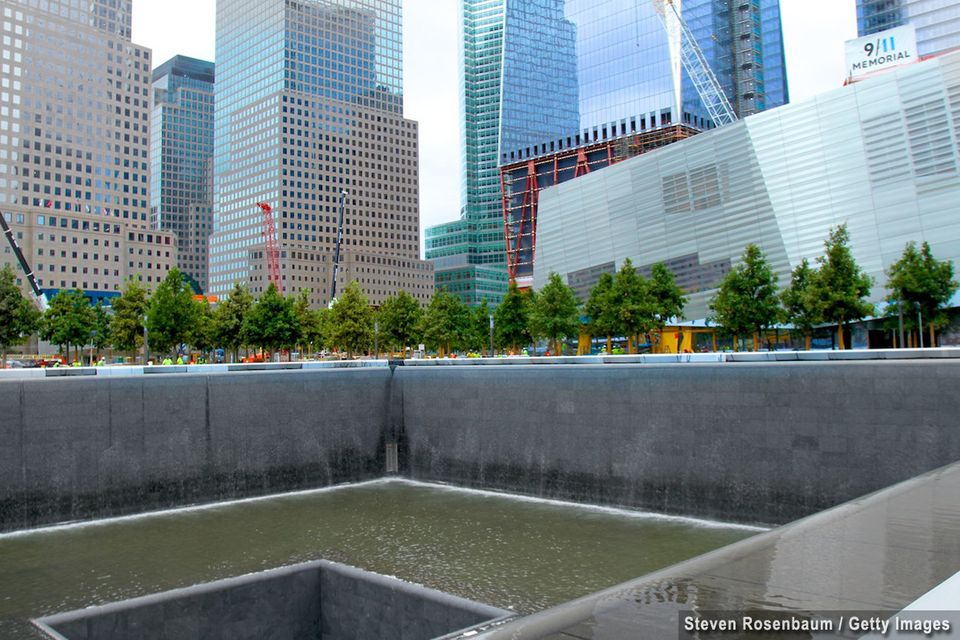 1 / 7
The Memorial Pools -
The south pool, testing the massive acre large waterfalls. These pools stand on the footprint of the fallen towers - the largest man made waterfalls in the USA.