Life on earth hangs on a thin thread. The warming of the earth's climate is taking place in an atmospheric layer which makes up two-tenths of a percent of the radius of the planet. Land degradation, soil erosion, and desertification, problems affecting a growing area around the globe, involves the slimmest of terrestrial layers --about 0.0003 percent of the planet's radius, the thin layer of soils where vegetation grows. On such margins do our lives and livelihoods depend.

Land for crops and livestock already accounts for nearly 5 billion hectares, or 40 percent of the terrestrial surface of the planet. Expanding the land area under food production to match population growth expected to exceed nine billion over the next three decades, and doing so using current cultivation methods, simply will not work. How we manage this crucial resource to meet growing demand for food, fiber, and energy from biomass will determine whether societies can achieve their aspirations for politically stability and a sustainable future.

For at least 2.6 billion people, more than a third of them rural poor, maintaining the productivity of landscapes has become a matter of survival.

Unsustainable land use practices and inadequate or ineffective land use policies are the major drivers of land degradation, leading to the deterioration of ecosystem services flowing from agro-ecosystems and forest landscapes globally. These drivers are strongly influenced by global factors such as population growth, rising land and food prices, expansion of major agricultural commodities, and climate change. Some 2 billion hectares of land (7.7 million square miles, or slightly larger than Australia), a quarter of it drylands, are already affected by land degradation. Desertification is the extreme case of land degradation, which is of particular concern because its consequences are often magnified by climate change and drought. 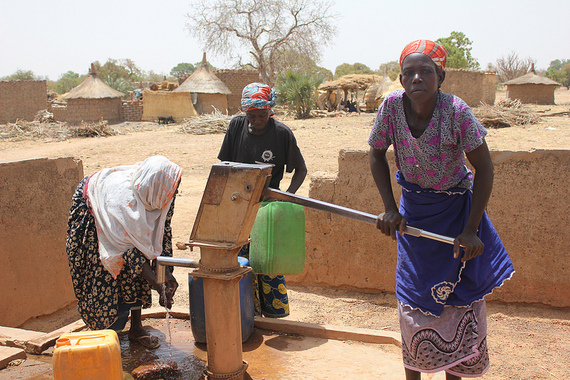 Pumping water in a rural village in Burkina Faso/GEF

Land degradation is a protean problem, doing harm in a number of environmental dimensions beyond the health of the land itself. Climate change, for example, affects the health of the land but is also affected by it, as deforestation increases greenhouse gas emissions. Land degradation leads to loss of biodiversity, reduced soil productivity, and depletion of water resources. It also triggers the loss of millions of tons of topsoil annually, some of which ends up as sediment on the coast or in lakes, causing what are known as "dead zones" -- oxygen-depleted water bodies that trigger the collapse of fisheries.

The good news is that improving land management practices does much more than secure food and other products. It means the safeguarding of multiple ecosystem services for the long-term.

Sub-Saharan Africa is the epicenter of the effort to slow and ultimately reverse the rising tide of land degradation.

The Guinea Savanna zone, covering an area of 700 million hectares from West to Southern Africa, was recently described as "Africa's Sleeping Giant" because of its vast untapped commercial agriculture prospects (FAO and World Bank, 2009). This potential must be tapped if a growing population is to be nourished. But in the absence of sound production practices tailored to the ecology of the region, awakening the giant may unleash other predicaments including massive loss of soil carbon that could turn Africa into a major global source of greenhouse gas emissions.

Emerging trends in Sub-Saharan Africa suggest that considerable opportunity exists to advance sustainable land management that can safeguard ecosystem services in the drylands. In the Sahel region, millions of hectares have been regenerated by smallholder farmers practicing agroforestry, soil and water conservation, soil fertility management, and sustainable forest management. Similar results have been achieved in the Horn of Africa and the Southern Africa region, where the legume tree known as Fadherbia albida is being used for soil fertility management. Most of these technologies and practices are not new, but their application by hundreds of thousands of smallholder farmers has been a major factor in creating impact at scale.

As we celebrate the World Day to Combat Desertification and Drought today, successes in the Sahel can spur African countries, with the help of global institutions, to embark on a long-term sustainable land management effort. With support from the Global Environment Facility (GEF) and the World Bank, 12 countries have committed to invest nearly $1.8 billion in the Great Green Wall Initiative to protect the Sahel from desertification and effects of climate change.

Often mischaracterized as a tree-planting campaign, the Great Green Wall effort will promote innovations that address productivity needs in crop, livestock, and forest landscapes, while contributing global environmental benefits. The GEF and its partners hope to replicate these benefits in other parts of Africa and other continents affected by this insidious problem that, left unchecked, will further erode the thin layer on which humanity depends.

Gustavo A. B. da Fonseca, Contributor