The 43-year-old chief executive, who took office in February, said was charmed by the apparel company’s outdoorsy brand. Paying homage to the late Lands’ End founder, Gary Comer, an environmentalist and sailor, Marchionni kicked off her reign by doubling down on the company’s efforts to be green.

“He was a sailor, and I love sailing,” she told The Huffington Post in an interview. “It’s the contact with nature that’s important.”

Lands’ End already has an eco-friendly reputation. Marchionni said it recycles 90 percent of the waste it generates at its plant in Wisconsin, where the company is based. Though the carbon footprint from shipping 16 million boxes around the world is notable, she pointed out that 60 percent of the packaging material is recycled. Over the last three years, Lands’ End has also helped plant more than 500,000 trees in U.S. forests.

But Marchionni wants to up the ante. As she mulls expanding around the world, she's also launched a new environmental campaign that would see the company planting more trees, using more sustainable materials in its products and further reducing its carbon footprint.

This spring, Lands' End plans to help plant half a million additional trees in partnership with the National Forest Foundation.

The company is also on track to receive a form certification from the Swiss company Bluesign, which ensures that textiles are made with eco-friendly dyes and materials that are safe for workers to handle. It's unclear how quickly these changes will be implemented.

“Everything that’s going into production is more sustainable,” Marchionni said. “[Bluesign] reduces the harmful chemicals and dyes. They improve safety for the workers at the plant and in local communities.”

Still, Marchionni said she can make the strongest sustainability push for Lands’ End by using the c-suite as a pulpit to reach customers.

In April, she began sending emails to customers to determine who would prefer to receive a digital version of the Lands' End annual catalog. Gradually switching to digital would allow the company to reduce the energy and materials needed to print and ship a physical booklet.

Now, like a couple embarking on honeymoon travel after renewing vows, Marchionni wants to take Lands’ End -- and its recommitment to sustainability -- global. A former executive at Dolce & Gabbana, she envisions a lifestyle brand for outdoorsy people around the planet. Lands’ End currently focuses on the U.S. and has small markets in the U.K., Germany and Japan, but Marchionni wants to be in every major market.

This may be a critical time for the company. Since Marchionni took over in February, the stock price has been on a downward slope. 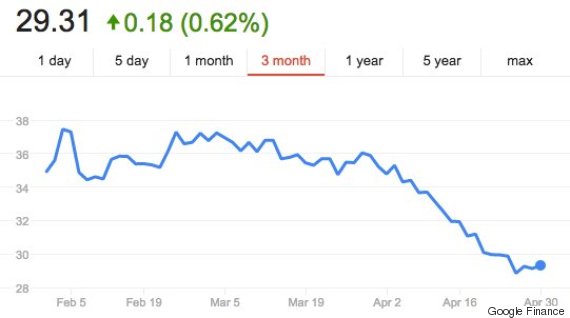 The company's sales from November 2014 through the end of January 2015 hit $504.6 million, down 4.9 percent from the previous year. Still, its revenues have been rising steadily since it spun off from Sears Holdings Corp. last April.

“I do believe we needed to say what we really are great at,” she said of the new environmental campaign, which kicked off on Earth Day, April 22. “Now we’re going to take on the rest of the world.”

At the very least, Marchionni, who hails from a small village outside Rome, wants to help create a better world for her 7-year-old son, Gabriel.

"He loves the environment, we care about it together," she said. "And I love him. He's my life."