As last-week campaigning ramps up to fever pitch, balanced precariously against the continuing impact of Hurricane Sandy and the attendant, and on-going, relief efforts. There is much discussion about where time and attention can most effectively be directed - by candidates, their surrogates, and their messages - but wherever it's directed, it's sure to be nasty and loud...and campaign-exhaustion is palpable.

Which puts into question just how much more the electorate is willing to swallow in terms of negative TV ads, distorted media messages (or as some of us like to call them, lies), and transparent campaign stunts that insult our intelligence and blunt any meaningful impact.

Positive advertising? Hard to find at this stage of the game - at any stage of the game! - yet most people express a longing for messages that speak to the issues that resonate for them, in words and tones that strike a chord without the vitriol that too often clouds the conversation. Turns out a group called Local Voices is, and has been, providing just those kinds of messages:

Local Voices was founded in 2008 by award-winning director Lee Hirsch ("BULLY") as a collaborative of volunteer filmmakers who believe that voters are suffering from political ad fatigue, and negative campaigning is largely to blame. People are starved for authentic voices amid the half-truths and spin.

The Americans in our ads understand what's at stake in this election, and their stories embody those stakes: from the Florida veteran who says his party left him behind on health care, to the dairy farmer in Colorado who credits President Obama's policies for keeping her farm running, to the Ohio fireman who says that, thanks to the economic stimulus, his town is "coming back around."

So to that end, the "storytellers" involved with the organization have created a slate of personal, heartfelt, expertly crafted "speak pieces," using everyday people who wanted to make their own voices heard over the cacophony. Take a moment to watch the amazing collection of pieces they've put together: 2012 - Featured Ads.

While viewing and enjoying their site is a meaningful exercise that will surely lift your campaign-battered spirits and remind you of why those of us supporting the President are, the more essential mission statement, particularly at this late date, is a "call to action" to get these very effective videos into the media and seen by more people. Take a look at their site to see how best you can do that. 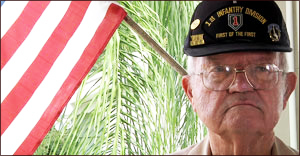 Click on the ads, watch and listen to these voices, and tell me you're not moved. Tell me you don't think, with even only a week left, they would have impact on those still listening...maybe even those who stopped a while ago. Because sometimes even the most intransigent voter can be affected, altered, by something honest and real. A voter still uncertain can be tipped by a message that conveys something heartfelt and authentic. The race is too close to not continue to reach out, right up to the last day. I urge you to do so.

And while you're at it, send this story around to inspire others. It's important. Especially with something as powerful and deeply affecting as these very real people, speaking in their own words, about why President Obama deserves a second term.

Photo & video with permission from LocalVoices.org.