In art museums across the world, Central Asia and the Persian Empire are primarily represented by carpets and miniature paintings. While these exhibitions offer rich windows into the artistry of these cultures and civilizations, art historian and curator Layla Diba recognized that much had been ignored.

To fill in one such gap in scholarship, Diba has authored an impressive catalog of Turkmen jewelry. Her research has been published by the Metropolitan Museum of Art in a weighty book,Turkmen Jewelry: Silver Ornaments from the Marshall and Marilyn R. Wolf Collection, which captures the splendor and scale of the ornamentation.

Diba was formerly the Hagop Kervorkian Curator of Islamic Art for the Brooklyn Museum, but she says that this study had its roots decades earlier. In 1978, as the director and chief curator of the Negarestan Museum of 18th and 19th century Iranian Art in Tehran, she took a "unforgettable" trip to Turkmen Sara in eastern Iran. The Negarestan had planned an exhibition of Turkmen silver for the same year, but the political turbulence sweeping Iran made the exhibit -- and its catalog -- impossible. Years later, Diba has put forth the authoritative art-historical study of Turkmen jewelry from the 19th and 20th centuries.

In interviews with The Huffington Post at an intimate book signing in New York and over the phone, Diba noted that Turkmen jewelry (and tribal arts in general) had been collected and studied before, but only from an ethnographic standpoint. "This is truly the first study of these pieces from an art history perspective, where we evaluate them not based on their purpose or social function, but as pieces of art," she said.

The items, from amulets to crowns and from pectoral ornaments to armbands, are heavy, intricate pieces of ornamentation. Indeed, Diba said the thing that most surprised her about the jewelry was the scale.

"[It] indicated a wealth and an ambition that was quite exceptional," Diba said. "The wealth of the person who would commission the pieces, and then the artistic ambition, if you like, of the maker. They're not just pieces that are throwaways or assembly-line, they're real works of art."

If the pieces in the book recall the contemporary jewelry of the bohemian-chic, it's because the Turkmen style has certainly inspired our contemporary fashions. "I was looking at a Michael Kors catalog two to three years ago and I found that the models were wearing replicas of the jewelry, but in gold," Diba said. "It was sort of reinterpreted and they were not these huge, monumental pieces which were sculptural, but they chose pieces that were wearable. Where they were made or how he got inspired, I didn't know, but it was very interesting because he's not exactly an ethnic designer."

She continued, "I certainly think that the rings -- which are Kazak, not Turkmen -- are just amazing. And of course I think the geometry in the pieces is reflected in the work of designers like Jill Sander."

While much of the Islamic and central Asian art that's made its way to the world's top museums was commissioned by regal courts, Turkmen jewelry was both created for and worn by the wealthiest khans and those "at subsistence level," according to Diba.

It should be noted that the jewelry of the Turkmen is not a monolith -- there are significant tribal and aesthetic differences between the works of the five major Turkmen tribes (the most represented tribes in this study are the Yomut and the Teke). In addition, the book features some stunning pieces of Kazak jewelry, such as embossed silver pendant earrings and decorative amulet holders.

"This is a project about bridges -- both cultural and geographical," Diba said of the many tribes and ethnic groups who created the jewelry. In her essay that opens the book and introduces the collection, Diba strikes a careful balance between the necessary histories and nuanced analysis of the art itself. In doing so, she deftly explains the differences and interactions between the tribes and outside influences.

The pieces in the book are drawn primarily from the collection of Marshall and Marilyn R. Wolf. The Wolfs have donated some of the items featured in the book to the Metropolitan Museum of Art (some of which are already on view in the Met's newly-expanded and reopened Islamic art wing), and have pledged the entirety of the collection for donation at a later date.

In addition to the Wolfs' collection, Diba studied the existing collections of the Met, the Natural History Museum and a landmark installation at the Brooklyn Museum formed by the Iranian artist Monir Farmanfarmaian (which was actually originally intended to be loaned to the Negarestan Museum in 1978). Museum collections in Germany and Russia were also studied in a secondary fashion.

Diba is now working on a series of articles on Qajar photography and nineteenth and twentieth century Iranian art. She's also co-curating Iran Modern, the first extensive look at Iranian modern art outside of Iran. Iran Modern will exhibit at the Asia Society in the Fall of 2013.

Turkmen Jewelry: Silver Ornaments from the Marshall and Marilyn R. Wolf Collection can be purchased online through the Metropolitan Museum of Art or Amazon. 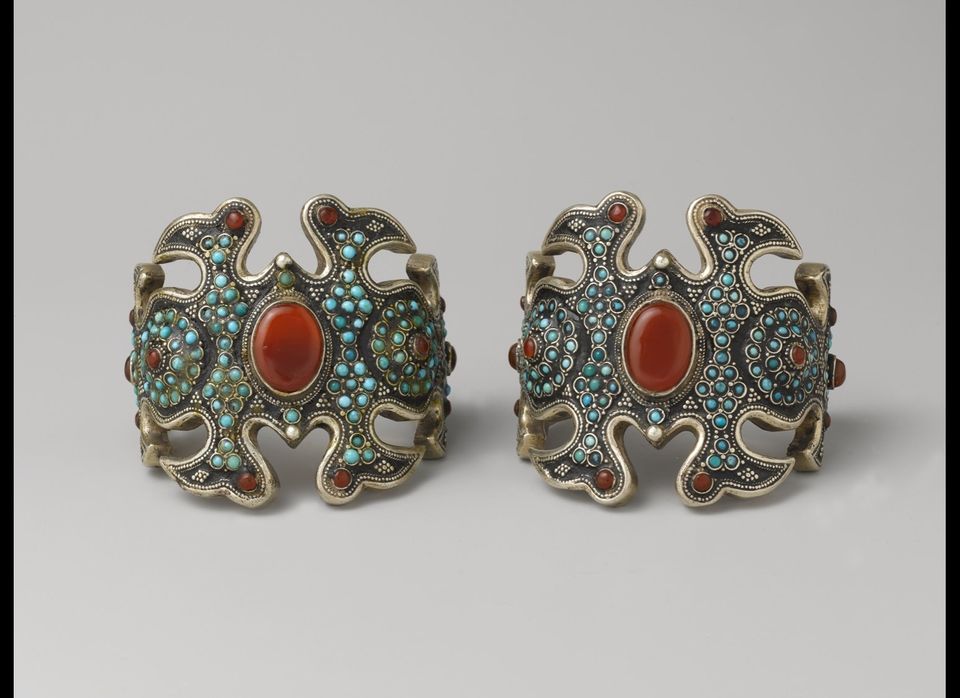