"The good painter has to paint two principle things, that is to say, man and the intention of his mind. The first is easy and the second difficult." Leonardo da Vinci, the man who pondered these thought centuries ago, was an innovator across art and science, who obsessed not only over the rigors of beauty, but over the creative processes taking place deep inside his mind. Leonard Shlain, the late author and surgeon beloved for books like Art & Physics, seemed to pick up his mantle in the 20 and 21st centuries.

Shlain's most recent publication, Leonardo's Brain, posthumously released by Lyons Press this month, explores the ins and outs of Leonardo's creative mind, focusing on the great artist's ability to utilize both the left and right sides of his brain. Using "The Mona Lisa" master as his focal point, the author delves into the intersection of art and science, attempting to illuminate why and how humans make art. Below is an excerpt from that book, taken from a chapter entitled "Fear, Lust and Beauty." 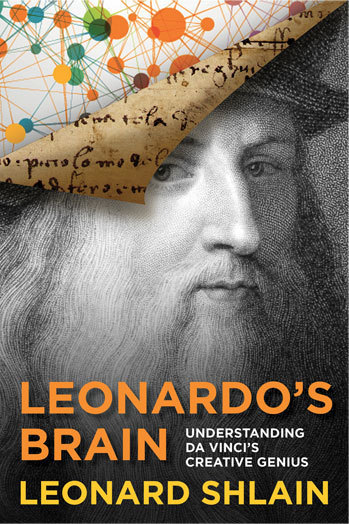 Creativity is at its base a combination of fear and lust. Danger and sex are the fundamental processes that artists traditionally call upon to create a work of art. Of course, he or she is not aware that these are the root causes. Creativity begins with perceiving a pattern, a feature, or an alternative use for a common object. After recognizing something novel, the artist breaks down the observation into its component parts. This is primarily a left-brained function, reductionist and analytic. An artist will reassemble the pieces into a new and compelling manner that others will recognize as art. But the work of art must contain "passion." It must be a work of "love." He or she must be in a nearly "orgasmic" state to produce it. Our word enthusiasm comes from Dionysian enthousiasmos, a wild state of holy inspiration. Orgasm is a right-hemispheric function. Love is rooted in the right brain. Ecstasy is an emotion experience at the right of the corpus callosum.

The scientist does the same, but is interested in understanding how the parts relate to the whole. Whereas the scientist uses reductionism and synthesis in the service of advancing knowledge, the artist uses the same in the service of aesthetics. The artist employs images and metaphors to interpret the relationships of reality; the scientist imposes numbers and equations on nature to express relationships of reality. The writer Vladimir Nabokov observed, "There is no science without fancy, and no art without facts." The revolutionary artist and visionary scientist are both fundamentally engaged in investigating the essence of reality.

A sense of beauty would not have evolved unless it gave humans an edge in the fight against other animals for resources. But, the question must be asked: Of what conceivable benefit could it have been to be in awe of a gorgeous sunrise when the attention would have diminished one's alertness to danger?

Beauty is, unfortunately, one of those short, slippery, all-purpose words that resemble children's play bubbles. The word beauty is used so commonly in so many different contexts that trying to grab ahold of the word is like trying to wrap you arms around a rainbow. The experience of beauty, like love and truth, is subjective. Its qualia of nonobjectivity is the reason scientists have, for the most part, avoided getting stuck in this ambiguous word.

Further reflections on beauty's definition, however, allows its breakdown into several different categories. There are three distinct kinds of beauty: sexual, natural and artifactual. (An artifact here is something crafted by the human hand.) These three categories overlap each other.

The third category, artifactual beauty, is the oddest. While humans are among a multitude of other creatures that fashion tools for a particular use, we appear to be the only animals concerned that the tool we make is aesthetically pleasing. From artisanal toolmaking, humans progressed to becoming artists. The objects they created increasingly had less and less practical value, until the artist was motivated to make something beautiful that was not utilitarian: art for art's sake. But why would someone devote time and energy to create something that could not be used in any capacity other than to evoke a response in the viewers or the artists themselves? Why do we seek beauty for beauty's sake?

The adaptation of what we call "appreciating beauty" begins with sexual attraction. How humans sublimated one of the instinctual drives, originally intended to heighten procreation, into an urge that propelled Leonardo to paint The Last Supper is instructive. It will lead to an understanding of how the quest for beauty became an integral part of human creativity.

Leonard Shlain died in May 2009 at the age of 71 from brain cancer shortly after completing this book. We present this excerpt courtesy of his family, including Founding Editor of HuffPost Arts, Kimberly Brooks. Leonardo's Brain is available through Lyons Press.