Paul Dillinger, Levi’s vice president of Global Product Innovation, said at a panel Tuesday at South by Southwest that the company has tracked results since 2011 when it began using less water in its finishing process. The reduction efforts include eliminating water during stone washes and combining multiple wet cycles.

During the panel, which was moderated by HuffPost Impact, Dillinger also called on consumers to wash their jeans less frequently.

Levi's new study, The Life Cycle of a Jean, found that 3,800 liters of water are used during the lifetime of a pair of jeans -- from the creation of your favorite 501s to that weathered holes-in-the-knees moment when you lay them to rest.

The study found that consumer washing accounts for 23 percent of water usage on average.

With the release of its water-saving results, the company is imploring others to join their efforts. Charles V. Bergh, the self proclaimed Levi’s “CEO with dirty jeans” wrote for Fortune:

“Even with the best intentions, companies today can only help solve some of the environmental and social issues that impact our world. In order to really make a difference, we must also encourage our global supply chain partners and consumers to prioritize these issues.

Multiplying such efforts would be significant -- and those opportunities aren’t pipe dreams. It would, however, require CEOs of major companies in the U.S. and across the world to use their voice and actions to address the debate about water consumption, climate change and the overall state of our planet.”

Dillinger also reminded consumers that the concept of sustainability applies to an entire life cycle of a jean.

"Most likely you're tired of that garment before that garment is tired of you," he said on the panel. "Donate to Goodwill to give it a new life." Levi's is asking individual consumers to do their part and find out how much water they use and could save by washing their jeans less frequently. Check it out here. 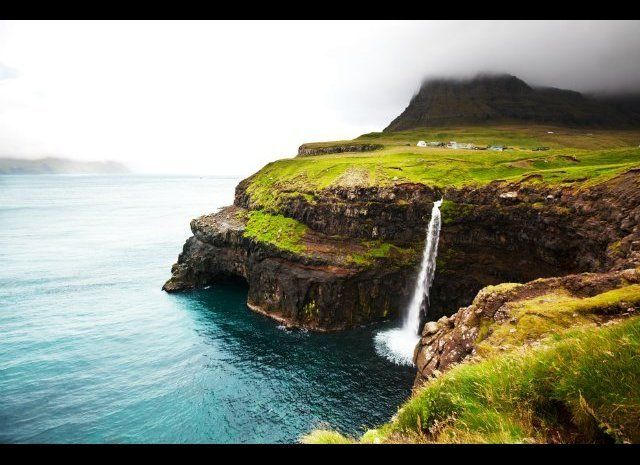 1 / 5
Bøssdalsfossur Falls—the Faroe Islands
One of the most remote waterfalls out there, Bøssdalsfossur Falls cascades off an archipelago that is set about halfway between Norway and Iceland. The Faroe Islands are an independent country, among the least populated in the world with less than 50,000 total residents to date—the town near the falls was home to only 16 people in 2002. The Islands are best known for fresh fish, wildlife and stunning natural beauty and though the waterfall is one of many beautiful features on the island, it’s one that people love to visit and photograph. <em>Photo Credit: Shutterstock</a></em> <a href="http://www.theactivetimes.com/13-world-s-most-breathtaking-waterfalls-slideshow?utm_source=huffington%2Bpost&utm_medium=partner&utm_campaign=travel" target="_hplink"><strong>Click Here to See More of the World’s Most Breathtaking Waterfalls</strong></a>