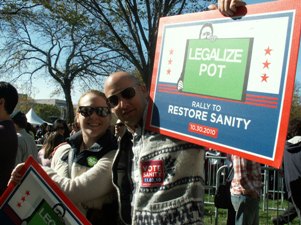 A post by Josh Marshall, editor of the widely-read Talking Points Memo web site, provides a needed reminder that liberals aren't automatically on board for legalization, even of marijuana. In a post that has drug policy bloggers shaking their heads, Marshall reveals to those who'd assumed otherwise that he leans against legalizing marijuana outright, and that he would have probably voted no on Prop 19 if he lived in California.

Reformers' puzzlement comes less from Marshall's viewpoint than from the fact that he holds it despite recognizing the consequences of drug prohibition, and their seriousness:

[L]et me be clear that I think our drug laws are catastrophic. They create endemic violence first in our major cities and now along the borders and it's led to generations of Americans rotting in prison. The whole war on drugs is an unmitigated disaster.

Marshall also has no problem with marijuana use:

Maybe it's that I'm getting into my 40s. And maybe I'm a hypocrite. I of course know people who smoke grass. And I don't have any problem with it. Decriminalized? Yes, I think probably so.

Yet he still finds a way to support keeping the heart of the policy that has caused the catastrophes he's described intact:

I remember, many years ago, talking to my father about the idea of legalization. And bear in mind, my Dad, God bless him, smoked a decent amount of grass in his day, said he didn't like the idea. One reason is that he was already a bit older by that time. But he had this very contradictory and hard to rationalize position which was that he was fine with people smoking pot but keeping it at least nominally illegal kept public usage in some check. Again, how to rationalize that in traditional civic terms? Not really sure. But frankly, I think I kind of agree.

The reason the position is hard to rationalize is that it isn't rational. If public usage of marijuana is an issue, the logical way to address it is by regulating public usage. City or county ordinances dealing with smoking in public places, for example, or disorderly conduct laws, on the books already in most locales, are examples which come to mind. Along with being inherently more reasonable than prohibition laws, such approaches also don't create the drug trade violence Marshall has described -- beheadings being among the recent atrocities. Drug policy reformers find it absurd to prefer expensive prohibition policies that fuel violence, in Mexico or anywhere, over benign and simpler strategies like public smoking ordinances -- for drugs in general, many of us feel, but especially for a substance like marijuana whose use Marshall rightly deems as okay.

Decriminalization is also not a good solution for the long term, though useful as a politically easier interim step compared with legalization. While decrim addresses one aspect of the incarceration problem, as we have seen in states that have decriminalized marijuana (like California), it leaves most of it intact. Decrim has also failed to stem the systemic racial disparities in drug law enforcement that helped motivate civil rights organizations including the California NAACP and California LULAC to support Prop 19. Decrim also does little or nothing to stop drug trade violence.

In a somewhat more arguable point, Marshall also cites the supremacy of federal law as a reason for voting no on 19:

[U]nless I'm missing something, [Prop 19] amounts to nullification. The federal government seems like the competent authority to regulate this question, even if I think our drug policy is a disaster. Federal laws trump state laws, even when you don't like them.

The something Marshall may be missing is that both legally and practically it's not that simple. Under our Constitution, federal laws do not simply trump state laws. Some do and some don't; it depends on the Constitutionally-interpreted reach of federal power. For drug laws, it's a mix: Congress can pass laws banning marijuana, the DEA can send agents to California to bust people for violating those laws, and California can't stop them doing so. But neither can the federal government force California to keep similar drug laws on its own books, nor to "commandeer" state agencies to enforce federal drug laws. Because most law enforcement is state or county or local, the ability of the feds to block the effects of state legalization is limited. And so thousands of medical marijuana dispensaries now stretch across California and other medical marijuana states -- illegal under federal law banning any marijuana use, but consistent with lawfully enacted state policy.

Now a voter may on policy grounds feel that states ought not engage in such a tug of war with the federal government, and decide to vote against measures like Prop 19 on that basis. But the legal right states have to do exactly that should be acknowledged; and a consistent application of that idea would also require rolling back medical marijuana laws as well, re-strengthening a medical prohibition which Marshall himself considers "crazy."

More broadly, with the policy Marshall has described as catastrophic now approaching its centennial (opiate and cocaine prohibition passed in 1914, marijuana 1937), isn't it time for the federal government's competence to regulate questions of drug policy to be called into question? Imagine how tragic it will be if the drug war should continue for another century after this first one. Catastrophic policies should not be rationalized into continuation; they should be replaced with better alternatives.

One thing that can be said for Marshall on this: It was courageous of him to publish that piece, given how wildly popular legalization is among his Democratic reader base.