When Kathleen Larimer, who lost her son, John, in the Aurora Theatre shooting, made her victim impact statement in the final days of the trial, she began by telling the judge, "I am so tired of crying." She and her husband, Scott, had been in the courtroom every day for four months, looking for answers that might help make sense of the murder of their youngest child. Over 100 people like Mrs. Larimer stood before Judge Carlos Samour in an Arapahoe County Courthouse and poured out their hearts in victim impact statements about the loss and devastation they experienced because of James Holmes. 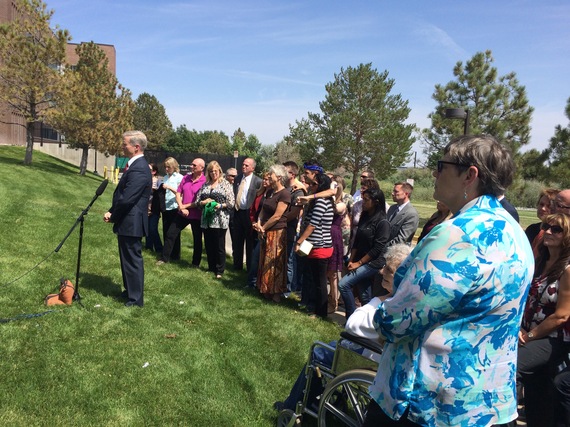 On July 20, 2012, I also took my teenage son to see The Dark Knight Rises at the midnight showing in Aurora, Colorado. Our theatre, however, was a few miles away from the Century 16. When the show was over I realized I had missed calls. Many calls. I rushed to the Century 16 Theatre to join my colleagues at NBC News in covering one of the most horrific mass shootings ever. It was so staggering in its carnage and complexity that it was difficult to get my head around it, even after covering the massacre at Columbine High School. The day of the attack was the first time victims began to tell their stories. The sentencing was the end of the three-year odyssey for those touched by the crime.

Over the months, sitting in the courtroom every day, we finally got some answers about the crime and why it happened. But even with light shed on the attack, it could not fill the dark hole in the hearts of the families who lost loved ones. Their anguish was palpable over the months. The large family of victims held each other up, especially during the last days of the trial, when they finally told the judge, in their own powerful voices, what they experienced and asked for a maximum sentence for the defendant who dodged the bullet of a death penalty. 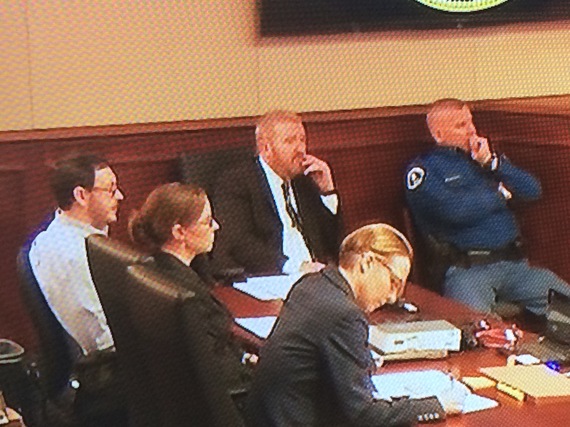 When District Attorney George Brauchler made his final argument in the case, asking the judge to show no mercy to "this guy" and give the "maximum sentence for the maximum evil," I heard Mrs. Larimer sobbing quietly behind me. For months she and the other family members would sit across the aisle on the other side of the courtroom. I could swivel my head and observe them at key moments, document when they cried, when they glared at the defendant, when they couldn't take it any more and left the courtroom. Listening to Mrs. Larimer cry right behind me captured my complete attention. I did not turn around to see her, but her sorrow could not be ignored and I listened.

On Wednesday, August 26, Judge Samour made his pre-sentencing comments to the court. He addressed the concerns of victims who said the trial had been a waste of time and money, as the defendant had been willing to plead guilty two years earlier to avoid the death penalty. Samour suggested they should focus on what came out of the trial rather than on regretting the decisions that were made. Then, for each of the 12 who were slain, he referred back to victim impact testimonies and specific points made about those loved and lost. Was it a waste of time when Chantal Blunk spoke about her husband, Jonathan? Was it a waste of time when Sierra Cowden talked about her dad, Gordon? Was it a waste of time when Teresa Hoover spoke about her son, AJ? What struck me as he recalled their names and remarkable lives was that the judge heard the victims. He really heard them.

Judge Samour gave the defendant one of the harshest sentences ever imposed. 12 life sentences without the possibility of parole and an additional 3,318 years for the people he injured plus an explosives charge. Then dripping with contempt he said, "Sheriff, get the defendant out of my courtroom, please." Breaking with four months of decorum the victims cheered and applauded as James Holmes was taken from the court one last time. 1,132 days after the attack these families can now contemplate moving forward. Some have been galvanized into activism. They are fighting for common sense gun controls and working hard so that the faces of killers are not remembered long after the faces of their victims. Many, like Kathleen Larimer, are not certain what the future holds but through her tears, she found her voice. "Now that this is over, I have to go home and live with all that emptiness, and yet somehow be happy with life going on," she said. And when she came up to the microphone that last time, everybody listened.