For billions of years, the history of life has been written with just four letters — A, T, C and G, the labels given to the DNA subunits contained in all organisms. That alphabet has just grown longer, researchers announce, with the creation of a living cell that has two 'foreign' DNA building blocks in its genome.

Hailed as a breakthrough by other scientists, the work is a step towards the synthesis of cells able to churn out drugs and other useful molecules. It also raises the possibility that cells could one day be engineered without any of the four DNA bases used by all organisms on Earth.

“What we have now is a living cell that literally stores increased genetic information,” says Floyd Romesberg, a chemical biologist at the Scripps Research Institute in La Jolla, California, who led the 15-year effort. Their research appears online today in Nature. 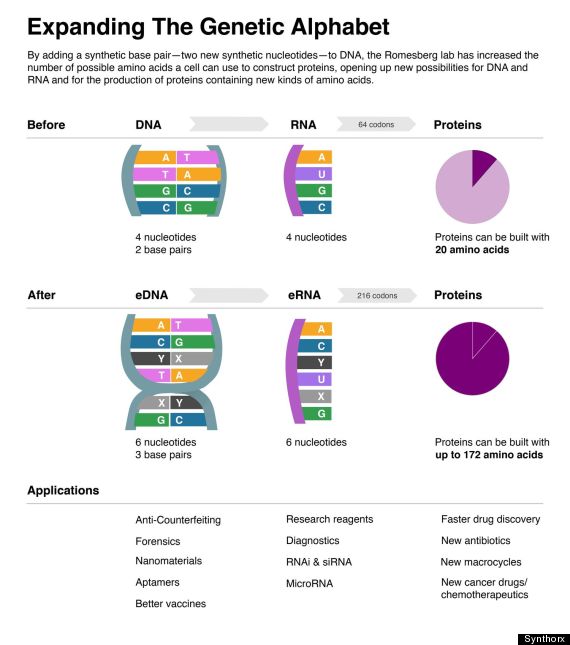 Each strand of the DNA's double helix has a backbone of sugar molecules and, attached to it, chemical subunits known as bases. There are four different bases: adenine (A), thymine (T), cytosine (C) and guanine (G). These letters represent the code for the amino-acid building blocks that make up proteins. The bases bind the two DNA strands together, with an A always bonding to a T on the opposite strand (and vice versa), and C and G doing likewise.

Scientists first questioned whether life could store information using other chemical groups in the 1960s. But it wasn’t until 1989 that Steven Benner, then at the Swiss Federal Institute of Technology in Zurich, and his team coaxed modified forms of cytosine and guanine into DNA molecules. In test-tube reactions, strands made of these “funny letters”, as Benner calls them, copied themselves and encoded RNA and proteins.

The bases engineered by Romesberg’s team are more alien, bearing little chemical resemblance to the four natural ones, Benner says. In a 2008 paper, and in follow-up experiments, the group reported efforts to pair chemicals together from a list of 60 candidates and screen the 3,600 resulting combinations. They identified a pair of bases, known as d5SICS and dNaM, that looked promising. In particular, the molecules had to be compatible with the enzymatic machinery that copies and translates DNA.

“We didn’t even think back then that we could move into an organism with this base pair,” says Denis Malyshev, a former graduate student in Romesberg’s lab who is first author of the new paper. Working with test-tube reactions, the scientists succeeded in getting their unnatural base pair to copy itself and be transcribed into RNA, which required the bases to be recognized by enzymes that had evolved to use A, T, C and G.

The first challenge to creating this alien life was to get cells to accept the foreign bases needed to maintain the molecule in DNA through repeated rounds of cell division, during which DNA is copied. The team engineered the bacterium Escherichia coli to express a gene from a diatom — a single-celled alga — encoding a protein that allowed the molecules to pass through the bacterium's membrane.

The scientists then created a short loop of DNA, called a plasmid, containing a single pair of the foreign bases, and inserted the whole thing into E. coli cells. With the diatom protein supplying a diet of foreign nucleotides, the plasmid was copied and passed on to dividing E. coli cells for nearly a week. When the supply of foreign nucleotides ran out, the bacteria replaced the foreign bases with natural ones.

Malyshev sees the ability to control the uptake of foreign DNA bases as a safety measure that would prevent the survival of alien cells outside the lab, should they escape. But other researchers, including Benner, are trying to engineer cells that can make foreign bases from scratch, obviating the need for a feedstock.

Romesberg’s group is working on getting foreign DNA to encode proteins that contain amino acids other than the 20 that together make up nearly all natural proteins. Amino acids are encoded by 'codons' of three DNA letters apiece, so the addition of just two foreign DNA 'letters' would vastly expand a cell’s ability to encode new amino acids. “If you read a book that was written with four letters, you’re not going to be able to tell many interesting stories,” Romesberg says. “If you’re given more letters, you can invent new words, you can find new ways to use those words and you can probably tell more interesting stories.”

Potential uses of the technology include the incorporation of a toxic amino acid into a protein to ensure that it kills only cancer cells, and the development of glowing amino acids that could help scientists to track biological reactions under the microscope. Romesberg’s team has founded a company called Synthorx in San Diego, California, to commercialize the work.

Ross Thyer, a synthetic biologist at the University of Texas at Austin who co-authored a related News and Views article, says that the work is “a big leap forward in what we can do”. It should be possible to get the foreign DNA to encode new amino acids, he says.

“Many in the broader community thought that Floyd's result would be impossible,” says Benner, because chemical reactions involving DNA, such as replication, need to be exquisitely sensitive to avoid mutation.

The alien E. coli contains just a single pair of foreign DNA bases out of millions. But Benner sees no reason why a fully alien cell isn’t possible. “I don’t think there’s any limit,” he says. “If you go back and rerun evolution for four billion years, you could come up with a different genetic system.”

But creating a wholly synthetic organism would be a huge challenge. “A lot of times people will say you’ll make an organism completely out of your unnatural DNA,” says Romesberg. “That’s just not going to happen, because there are too many things that recognize DNA. It’s too integrated into every facet of a cell’s life.”