Japanese researcher Hiroshi Nittono just made the Internet's day. According to a new study lead by Nittono for Hiroshima University, looking at pictures of puppies and panda cams and grumpy, grumpy cat videos at work doesn't just improve your mood, it can also increase your productivity.

Results show that participants performed tasks requiring focused attention more carefully after viewing cute images. This is interpreted as the result of a narrowed attentional focus induced by the cuteness-triggered positive emotion that is associated with approach motivation and the tendency toward systematic processing.

In Japan "kawaii" (Japanese for cute) is a cultural phenomenon (think, the Hello Kitty craze). With their large heads and eyes, these type of images are thought to stir positive feelings because they resemble babies, according to LiveScience.com.

For the study, Nittono and his colleagues studied three different groups of students as they completed various tasks, one of which was similar to the American board game "Operation." Each group attempted its respective task twice: the first time without viewing any images, and then after looking at a series of pictures, which could have included baby animals, adult animals, or some other neutral subject (like foods).

The students who looked at cute animals did far better at the game then did peers who observed adult animals or food, outperforming their peers by a "significant margin," according to Gawker.

Researchers theorized several reasons for the improvement. One reason considered and dismissed was linked to a behavior tendency in adults to slow down speech when talking to puppies and kittens.

Another reason may be connected to nurturing instincts. "If viewing cute things makes the viewer more attentive, the performance of a non-motor perceptual task would also be improved," the study stated.

On the other hand, past studies have shown that short breaks of all kinds, whether to look at that adorable corgi slideshow or to check out the latest "Gangnam Style" parody video, can help keep you more focused throughout the work day.

"Web browsing can actually refresh tired workers and enhance their productivity, compared to other activities such as making personal calls, texts or emails, let alone working straight through with no rest at all," reports The Wall Street Journal.

This view is bolstered by a 2009 University of Melbourne study which concluded that "short and unobtrusive breaks" made workers more productive than counterparts who refused to give in to the call of the web. 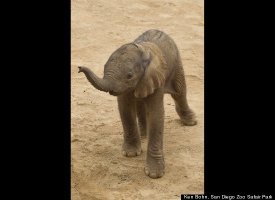 1 / 39
Baby Elephant San Diego Zoo
A newborn Africa elephant lifted his trunk in search of his mother at the San Diego Zoo Safari Park. The male calf was born at 5:45 a.m. on Monday to Umngani (oom-gah-nee). In this rare moment, the calf stood alone after he had wandered off a few steps, but shortly thereafter his mother, 5-year-old sister Khosi (koh-see), and 2-year-old brother Ingadze (in-Gahd-zee) rushed over to tend to the unnamed calf. Throughout the day the family watched over their newest member, letting him only stray a few feet. The Safari Park is now home to 18 elephants8 adults and 10 youngsters. The adults were rescued in 2003 from the Kingdom of Swaziland, where they faced being culled. The average gestation period for African elephants is 649 days or 22 months. A newborn calf averages 200 to 300 pounds. Calves can be weaned at 2 to 3 years old.
Ken Bohn, San Diego Zoo Safair Park