Fashion is so much fun when bold, young and ambitious men like Adam Mattingly and JoJo Macias of Atom Willis set out to conquer the world with a luxury designed men's leather jacket.

I love excitement and adventure so when I listened, and heard the story of these two Texans my internal purr button was definitely turned on.

It's a pleasure and honor to share how Atom Willis is bringing luxury men's leather jackets for a cause (Multiple Sclerosis) to the universe. Let's get started.

Catherine Garvin: What fashion challenges are you two facing today?

Adam Mattingly: The economy makes it extra challenging when you launch a luxury label with a $1,000 retail cost. As far as the actual designing goes, the only challenges we faced were having never done it before. We almost went broke before we even got going shipping samples back and forth.

JoJo Macias: Atom Willis is only sold in a few places at the moment, through our own site, by appointment and Threads Count in Portland. (The Great Lance Miller) We've had some press the Austin Monthly placed us in the "Designer to Watch" column. Also, the jackets were recently shot on actor, Ian Harding, for REGARD magazine and actor, Taylor Handley for YRB magazine. We appreciate getting the word out about our creation.

Mattingly: We learned as we go. I will never forget how big my head was after the first samples were flawless. Before they arrived I was just dreaming that they would come back as pictured. The factory looked at me like I was insane when I asked for purple stitching but it came out flawless. I remember nobody at my job yet knew about Atom. The samples arrived at my office and I went into the bathroom to check them out and phoned my parents and I told them. I felt like someone was entering into the auto business and their first model was a Porsche. This is when I found JoJo -- whose photos I had seen on his bands Facebook page and his collarbone tattooed, "love, hope and faith" -- had me contact him like a stalker knowing that those words alone would put people into awe while looking at the jackets. The tattoo resonated with me so I asked him to take some photos in the sample jackets the rest is history.

Garvin: Tell me a little about the look of Atom Willis.

Macias: Atom Willis is a lambskin leather jacket collection for men. Artisan leather workers create each style with a button-in or out hoodie and a removable, pinstripe rabbit fur vest. In addition, every jacket has an embossed Atom Willis nickel plate inside the jacket with a serial number that the buyer can register with brand. If the jacket is lost it can be returned via Atom Willis to the owner. These are very unique and personal features of this line. 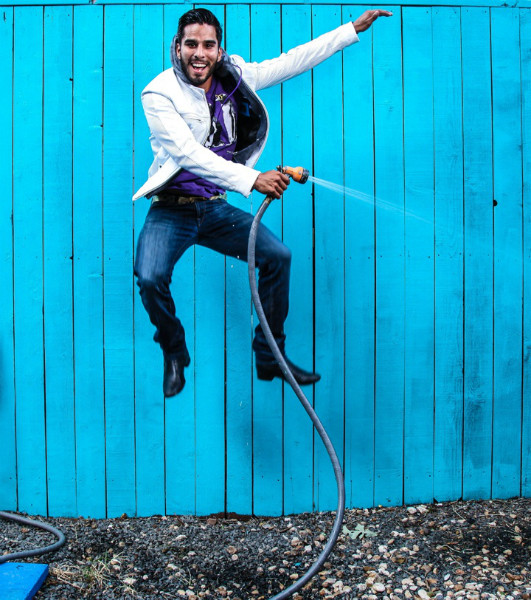 Mattingly: There are four jackets in the line, but the "punched leather" jacket in black and white might be a perfect fit for the upcoming months which get consistently warmer as we edge into spring and summer. This particular style has tiny punched holes in the leather detailing and under arm ventilation, which makes it the ideal jacket to wear year-around, and in warmer climates.

Macias: The line was founded and designed by Austinite Adam Mattingly and myself to help support research, and funding for a cure for Multiple Sclerosis, a disease that is currently affecting Adam's sister and is only funded by private donations. We like to say, "Fashion with a purpose."

Mattingly: I hate MS. This is the root of our campaign. There is no way we are ever going to cure disease if we are cutting budgets for disease research. They should have never even have heard the word budget. My sister gave 1.2 million to Dr. Hauser out of University of San Francisco. This money assisted his study that studied sets of identical twins from around the world for two years. The killer was when he was speaking at a dinner for the foundation and he told us the MS is not genetically passed on but environmental.

At this point my uncle raised his hand and said "Doctor, would the world have ever have known this ground breaking fact if it were not for private funds?" "Never," said Dr. Hauser.

By the way, his study made the cover of Nature magazine.

Garvin: What inspired you to put the words love, hope and faith on your collarbone?

Macias: Funny thing about this is. I grew up raised a Catholic. Not too strict, but raised well. I remember at a young age. Reading these lines was something that hit home to me. So what's the next best step? Tattoo it on myself. But the funny thing about it is that I tattooed it somewhat backwards. The original is hope, love and faith. I wrote it love, hope, faith. That's the way I look at things. Love what you do. Always have hope for other people and yourself. And always keep your faith in everything you do. 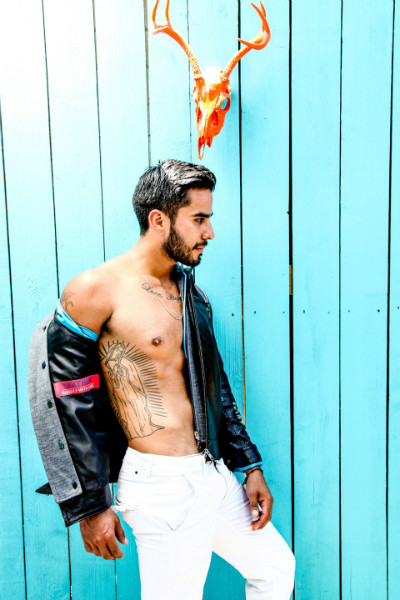 Mattingly: JoJo became a partner because I run a unique industrial plastics business and I knew that I had something on my hands and I needed someone full time all day on this project and not just an employee. JoJo and I then started playing with designs for a few more styles. Haha, the second round of samples did not go so well. We were both so excited when the FedEx came but when we opened it, it was like the world came crashing down. My ego was non-existent. Up until this point, everything had come so easy and ever since every step of starting Atom Willis has become a challenge but amazing. We were originally going to launch January of 2011, two years ago, but we needed better zippers, then the best lining then it was the snaps, then the actual leather, it is basically a zero expense spared project, it has to be. It's a luxury label so I can't have any lining ripping or buttons popping off. I flew to Seoul for two days on a weekend using miles just to go to the four-story fabric mall and after all that, we went with black. Haha, JoJo and I are now nearly experts in every aspect of leather jacket design. Self-taught with pride.

Garvin: What about your music JoJo?

Macias: I play in a rock band called "The Artillery." I play with my three best friends. We have been playing together ever since we all learned how to play instruments. 11 years now, wow.

Mattingly: For me personally, I have always been a t-shirt-wearing, ripped jeans-loving, thrift shop-buying kind of guy. I'm obsessed with colorful sometimes-unmatched socks pulled up to my knees while wearing shorts. Socks are still probably the only thing I really by new outside of dress clothes. I like minimalist with a splash of wow color, fine lines nothing overly designed. You can see this in Atom Willis. Masculine with a pop, like the blue stripped, removable rabbit fur vest.

Garvin: What music festivals are you two guys looking forward too?

Macias: I am looking forward to ACL and Fun Fun Fun Fest and SXSW. I really do love my city (Austin) the "live music capital of the world."

Mattingly: You mean why Boho hippie? This is my favorite question. This is simple. The aggressive policing of the world is earning us more enemies daily and I know that it must be expensive to have U.S. military bases stationed in over 130 foreign countries around the world. At the same time we are cutting budgets for medical research. Where is the logic? Non-existent. I need all that money. I need to save my sister. Ron Paul is the inspiration for both of us. Haha, we actually made a movie. 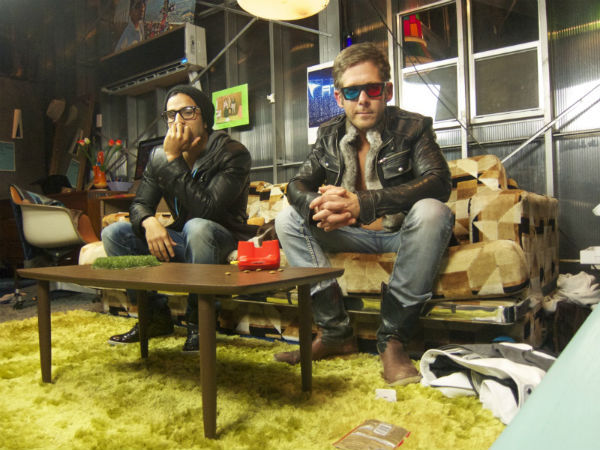 Garvin: Really, tell me more about that.

Mattingly: Ron Paul actually owns the name Atom Willis. The original idea of the movie was to help him win because he was the only one who spoke of peace and defending our borders. The campaign film is interesting. My friend came in town to help me prepare for the march. We thought it was a failure because we did not have one R.S.V.P. until the day before. When we saw that the first sign was misspelled after our arrival in downtown and the cameras were rolling, we thought people were going to laugh at us. With thoughts of canceling we winged it and that girl started talking. The one who was supposed to carry the sign saying, "We represent the original hippie" I had never met her. She had no clue she was going to speak. It all just kind of happened. After the wrap one of the cameramen came up to me and asked if I knew whom she was (the one who saved the whole shoot, without the sign or talking it would have been dumb)

Then two months later protesting became a felony. The voice in the back of my head tells me I can donate to MS research every year but it won't do a thing towards real change. Therefore I must try and change everything, hence the movie.

Garvin: Here's a question a little off topic. What do you think of The Lumineers?

Macias: I really like The Lumineers, I'm glad to see more folk-style bands coming out. It shows the real raw roots in music. Not overproduced like many bands out there. Just plane simple music.

Garvin: My readership like me loves animals. Tell me about the English springer spaniel and the fluffy cat in the fashion photos. 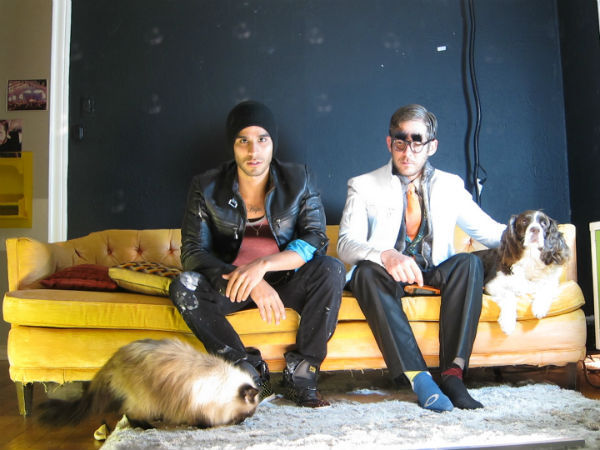 Mattingly: Oh, I love what I am hearing. Ok, so the Springer is Dixie and McGarrett the cat we inherited two years ago after the passing of our neighbor. McGarrett hated us and would not leave from underneath the hot water heater for two months, and would attack when we put the food in front of him. Now McGarrett loves us and only attacks occasionally.

Macias: I met Mr. Miller on my travels to the west coast. I had several appointments set up in Portland to meet with some buyers at a boutique shop. It was actually kind of funny. Before the interview I called and ordered the man some pizza. So it would be there when I showed up. Come to find out. They almost ate the whole two boxes of pizza.

JoJo: I have heard of company. Come to find out that Caleb is from Marble Falls. Which is about 40 min from Austin. I really hit it off with all the guys. They are all truly amazing young individuals with a bright future ahead of them.

Voting Made Easy
Register to vote and apply for an absentee ballot today
Register now
More:
Stylemens stylemultiple sclerosisVideo
Newsletter Sign Up
An essential daily guide to achieving the good life
Subscribe to our lifestyle email.
Successfully Subscribed!
Realness delivered to your inbox