Recipients of Macy's national catalog had to really think this one through when the aforementioned price reduction was listed as a "Super Buy." The item, a 14k Gold and Sterling Silver Necklace, was even available for purchase in store, according to customer Robert Bernard.

In an ABC News segment, Bernard recounts his experience at the Texas Macy's in Collin Creek Mall, where he witnessed the $47 necklace sell out before he ordered two of them to be shipped to his home. His total savings? $1,406. (That sure beats any deal we've ever scored.)

Unfortunately, this was too good to be true. Macy's called a couple of days later to inform Bernard of the incorrect pricing and cancelled his order. The actual price of the 14K necklace was $479 -- meaning, the "9" was accidentally omitted. Oops?

Beth Charlton, a Macy's spokeswoman, gave a statement to News 8:

"When the mistake was caught, signage did go up in the fine jewelry department and on store doors alerting customers that a mistake had been made. For those customers who bought the necklace at the $47 price, they were fortunate. For the gentleman you spoke with, he was not so fortunate. We are sincerely sorry he was disappointed and unable to buy the necklace at the $47 price for his wife."

Thus far, this hasn't really been a great year for the jewelry industry. Back in February, the De Beers counter in a Paris department store was robbed of millions of euros worth of stock. Just a day before that, armed robbers at Brussels airport left with $50 million worth of diamonds after a five-minute heist.

We're not sure just how much Macy's lost in their unfortunate typo incident, but we're pretty sure they'll never take catalog editing lightly again. Check out the video and shot of the typo and tell us what you think! 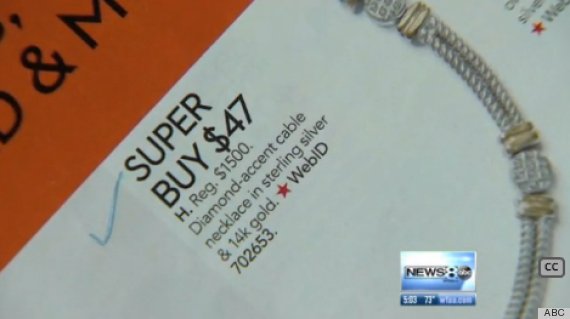 Our Best Shopping Deals... Ever!