"picking apples, making pies
put a little something in our lemonade and take it with us..."

Lemons were neither meant to be eaten nor drunk. Not originally at least. For 1,500 of their 2,500 years of existence, they were mostly ornamental. First in northwestern India, then in the Middle East and North Africa, where Arab travelers introduced them around 100 A.D. The Greeks used them for decorative, sometimes therapeutic purposes, but with the exception of a paranoid Emperor Nero, who gorged on them to prevent food poisoning, no one paid lemons much attention. Until one day a hot and bothered Egyptian peasant, who could not afford the typical sweet wine, sliced a few of the bitter fruits open and squeezed them with some honey and dates. 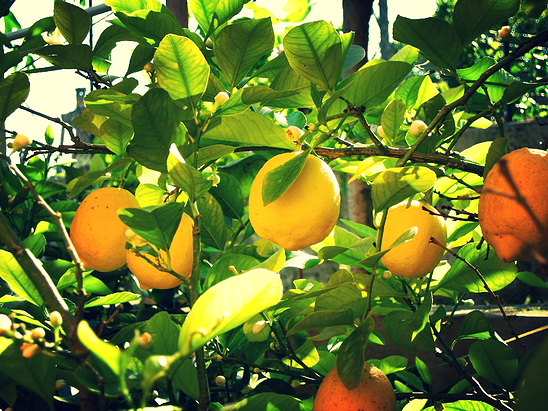 On that unknown day in that unknown village, that unnamed man stumbled upon the ultimate paradox, in taste and in life; he "picked up the lemons that Fate had sent him," and made the first lemonade.

"This song [...] is of no place and every place; you might hear it anywhere at any time. For wherever the sun rises and sets in the city's turmoil or under the open sky on the farm, life is much the same; sometimes bitter, sometimes sweet."
- Sunrise, A Song of Two Humans

All men are not created equal. Each year, 1,040,835 babies are born with heart defects, 323,904 with neural tube defects, 307,897 with hemoglobin disorders, 217,293 with Down syndrome, and 177,032 with glucose-6-phosphate dehydrogenase deficiency. 5.9 million later die before their fifth birthday, and those who do not eventually discover poverty, war, illness, disappointment, grief.

We are not created equal; our adversities are not the same. But we are acquainted with their bitterness from the start. I suppose in that sense, Thomas Jefferson was right: We are all dealt cards we do not choose, to play in a game we did not invent.

Some of us fold. Some build forts. Some make lemonade.

In a collection of six short stories he compiled and called "after the quake," Haruki Murakami describes the lives of six random people in the immediate aftermath of the 1995 earthquake that killed 6,434, injured 43,792, and displaced 310,000 citizens of the city of Kobe, Japan.

One of them, Miyake, loses his wife and two kids and moves to Ibaraki, "a navel-lint nothing of a town" by the sea.

"[...] This place gets more driftwood than any other beach I know. That's the only reason. I came all the way out here to make bonfires."

And he does, on the beach where the driftwood from the disaster, from a life he and many others lost, keeps washing up.

The lyric poet Horace once wrote: "Adversity has the effect of eliciting talents, which in prosperous circumstances would have lain dormant." Like building a bonfire whose "only purpose was to warm people's hearts."

We are all given something. Eugenio Montale wrote that "even the poor know that richness, the fragrance of the lemon trees." What we are given defines who we are; what we are not given shapes who we become.

In 1824, Ludwig van Beethoven could no longer hear at all, so he used mid-tones, low frequency notes, and all he knew of music theory to compose "one of the finest pieces of music ever written;" the Ninth Symphony. In the 1960s, Temple Grandin's autism was depriving her of human contact, so she invented a deep-pressure device to soothe hypersensitive persons; the "hug machine."

But my favorite of these stories is this: during the Great Depression, inn owner Ruth Wakefield had no baker's chocolate, so she mixed little pieces of a bittersweet bar into her dough, and made chocolate chip cookies.

We will all be handed lemons. The brave of us will make lemonade. The best, limoncello. But I digress. The point is: Beautiful things can happen at the intersection of bitter and sweet.