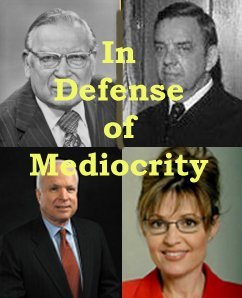 In 1970, when Richard Nixon nominated Court of Appeals Judge G. Harrold Carswell of Florida to the United States Supreme Court, there was an outcry that Carswell was not a jurist of the caliber required for the nation's highest tribunal.

Nearly 60 percent of Carswell's decisions as a District Court Judge had been overturned. Critics charged that he was, at best, mediocre, and therefore unqualified to sit on the Supreme Court.

''Even if he were mediocre,'' Mr. Hruska declared, ''there are a lot of mediocre judges and people and lawyers. They are entitled to a little representation, aren't they, and a little chance? We can't have all Brandeises, Frankfurters and Cardozos.''

Hruska's argument was an interesting one, but the elitists in the Senate decided to deny representation on the high court to the mediocre people of America, even though Judge Carswell demonstrated that he was qualified because he could see the Supreme Court from his front porch. (OK, not really.)

John McCain and the Republican party have now revived Hruskaism (which has the unfortunate property of sounding a lot like hucksterism).

The argument for McCain's choice of Sarah Palin is that she represents the ordinary people of America.

McCain's Hruskaist contention boils down to this: Why have an extraordinary person for president, when you can have an ordinary one?

Will the well-rested Philadelphia Phillies choose a mediocre pitcher or an elite pitcher to start the first game of the World Series tonight?

When you face a serious operation, do you seek out a mediocre physician or an elite surgeon?

Do we want a mediocre general or an elite general in charge of our armies during war?

John McCain's version of Hruska goes like this: Even if Sarah Palin is mediocre, there are a lot of mediocre people in America. They are entitled to a little representation in the Executive Branch, aren't they? We can't have all Washingtons, Jeffersons, Lincolns, and Roosevelts.

But, then . . . the mediocre people of America have had their representation in the presidency for the past eight years.

Isn't it time for the thinkin' people to have representation in the Executive Branch?