When McDonald's CEO Don Thompson starts rhapsodizing about his burger chain's food, it's not the Big Mac that's on his mind. At least not recently when he waxed poetic about the McAloo Tikki: "This is a veggie patty that you actually see the peas and the kernels of corn inside the vegetable patty. It is a wonderfully fantastic patty with this tremendous sauce. Man, the lettuce -- this is a great sandwich."

Sounds great -- for foodies, for vegetarians, for health-conscious eaters and for the planet. Too bad you can't get it in the U.S.

McDonald's has 15 different hamburger options on its U.S. menu. In fact, the company is so addicted to meat that even its fries have "natural beef flavor." But if you're looking for a hearty meat-free meal, you're out of luck. Despite Mr. Thompson's declaration of love for India's vegetarian offering, there's not a single McVeggie Burger on the American menu.

The odd thing about this -- besides the obvious loss of the growing meatless market share -- is that McDonald's refusal to add meat-free options to its menu is directly at odds with the sustainability framework that it released a few weeks ago amid much fanfare. 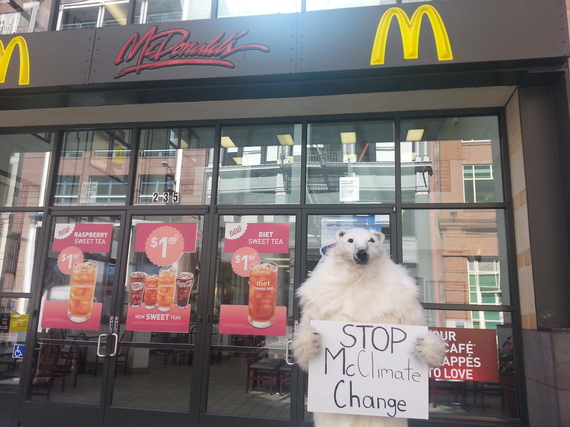 Meat production takes a devastating toll on the environment, the climate and wildlife -- far more than producing vegetable protein. According to McDonald's own Corporate Sustainability Report, beef production accounts for 29 percent of the company's carbon footprint -- as much as the operation of all 35,000 of its locations -- and 41 percent of its supply chain footprint. Despite the fast food giant's claim that it's "raising the bar" on sustainability, the company is missing the most obvious and effective way to reduce the clown-shoe-sized carbon footprint of its menu. That's why the Center for Biological Diversity, where I work, just launched an online consumer petition asking McDonald's to add meatless options to its menu. More than 25,000 people have already signed on.

McDonald's says it plans to start sourcing "sustainable beef" within the next couple years, but with 75 burgers sold every second of every day -- and a business model intent on selling even more -- the sheer quantity of ground beef flowing through the Golden Arches defies any possible definition of "sustainability." If McDonald's wants to show that it takes sustainability seriously, it should start by looking at what's on its menu. 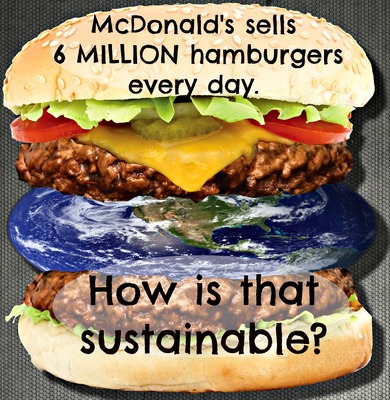 I know some people will argue that "McDonald's" and "sustainability" don't belong in the same sentence. Although McDonald's may not be the restaurant of choice for many environmentalists, it is for about 70 million people daily. Like it or not, that means McDonald's has an outsized influence over the industry and the eating habits of people around the world. At a time when it's becoming increasingly clear that cutting meat consumption is a key to curbing climate change, making earth-friendlier alternatives more accessible can make a big difference for the planet.

Polls have shown that Americans are eating less meat than they used to, and that's good news for the environment and wildlife. It could be good news for McDonald's, too, if the company finally decided to add a meat-free sandwich to its line-up. As much as Mr. Thompson loves the McAloo Tikki, doesn't he think his customers and the Earth would love it, too?