The first time I "met" Hillary Rodham Clinton does not really count: I was in the back of a huge crowd in Oakland, so far away from the stage I could barely understand her words.

She was running for President against Barrack Obama, and my wife Gloria and I had gotten free tickets for doing volunteer work. We loved Hillary as a long-term fighter for healthcare, our number one issue since our son Roman was paralyzed.

The second meeting was at a fundraiser, led by her husband, the former President. We were in the backyard of Bob Klein, the man who inspired Proposition 71, which led to the $3 billion California stem cell program.

I would have about fifteen seconds to talk with President Clinton. Naturally I had it all planned out, exactly what I would say.

"Thank you for being the first President to authorize embryonic stem cell research."

Clinton had indeed been the first, though President George W. Bush canceled it immediately, only later allowing a small sliver of the promising research.

But when it was my time to meet the former President, standing there beside Bob Klein, it occurred to me that was something Bob should say, as the host, not me.

And so I pretended to be tongue-tied, which if you know me, is not often the case.

It was interesting to see how President Clinton handled the awkward moment. He seemed to genuinely want me to succeed. He leaned forward, and nodded encouragingly, waited--ignoring the long line of other people waiting--but I said nothing, and so he just smiled and took a picture with me and Gloria. 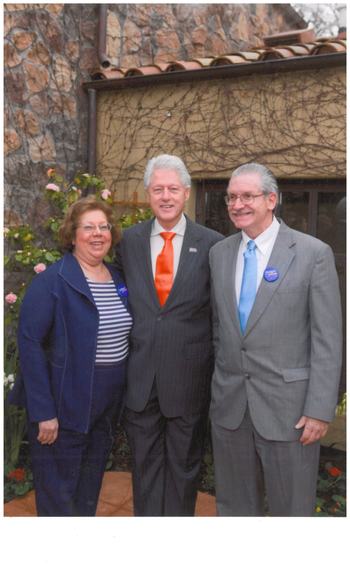 But later, inside the house, sitting in the living room, I had a second chance. When Bob said the President would answer some questions, I jumped up first.

"Why is it," I asked, "that when a man acts strong we say he is showing leadership, but when Hillary does the same thing, people say she is rude?"

He beamed, and talked for twenty minutes about his wife's leadership abilities.

The third meeting took place earlier, in Washington, DC, on the West steps of the White House. A group of stem cell research supporters were gathered to support the Christopher Reeve Paralysis Act: April 12, 2005

Many spoke, perhaps too many; we were running a little long.

Then Hillary took the mike. She smiled at someone she recognized, nodded once, and began.
I opened my notebook, clicked my pen.

A few minutes later, when she was done, I unclicked my pen, looked down to see what notes I had taken. But my hands were empty. There was my notebook, lying on the asphalt, where I had dropped it. I had not taken a single note.

But I was in tears.

It was as if she had spoken directly to me, in a personal conversation. I felt she knew what the loss of Christopher meant to us, and that of course we would go forward and fight for the cause, and by so doing, honor his memory.

Today, of course, Hillary is running for President against Donald Trump. For some, this may not be exciting, because we are just used to her, seemingly always there, fighting on our side. Maybe we even take her a little for granted.

But I do love to watch her in battle. Remember that debate with Bernie, when he got so excited he started shouting and flailing his arms? She did not flinch when he invaded her space, just studied him, calmly, as if he was something interesting.

And when the Republican-stacked Benghazi committee interrogated her for more than 12 hours, she just answered them politely, as long as they had the energy to keep making up new questions. Eventually, she wore them out.

I imagine she will deal with Trump similarly when they meet in the debates; he will holler his usual insults, attempting by every means to intimidate her. Watch for him to lean forward suddenly, trying to shake her concentration. But she has been attacked before. She expects the fight, and does not fear it.

A President will needs such calmness and courage, as he or she faces the most tremendous problems on earth. When crises come, as they surely will, she will study the situation, and make up her mind carefully, intelligently. "Shooting from the hip" is not helpful from someone who has the nuclear codes, and could literally begin World War III.

Is she the right woman for the job? For an incredible twenty times, the highly respected Gallup Poll has selected Hillary Rodham Clinton as the most admired woman in the world.

Read her story on Wikipedia, see what she has done with her life: how at every step she has been a leader, a decision-maker, and someone who fights for good.

And the nomination struggle? Every Democrat is moved by the passion of Bernie Sanders; he is the heart of democracy.

But the votes are being counted, and Clinton is ahead.

When that struggle is behind them, I expect her to be toward Sanders as Obama was to her: recognizing his talent and vision, relying on his council, putting the needs of America before any former rivalry.

Above all, Hillary Rodham Clinton is ready, overwhelmingly prepared for the job. In addition to a lifetime of public service, she has worked side by side with two of the greatest leaders in history: President Obama, who brought us through the Great Recession, and who respected Hillary so much that he appointed her Secretary of State; and Bill Clinton, who led an American era of peace and prosperity.

Hillary! She is the very affirmation of the Presidency, comporting herself with dignity, strength, courage and compassion-- we would be fools to let her go.

Don C. Reed is the author of "STEM CELL BATTLES: Proposition 71 and Beyond", available at Amazon.com.