Memoto CEO and co-founder Martin Källström is building a postage-stamp-sized wearable camera that can document every moment of his life -- or yours -- by snapping two photos a minute, 1,920 pictures a day.

This "lifelogging" camera, which will automatically take a photo every 30 seconds and save it to a private site (a daily total of 1,920 assumes eight hours sleep), has received $509,000 in backing from more than 2,600 funders on Kickstarter. The project hit its initial $75,000 fundraising goal in a matter of hours. The Memoto camera is currently in development and slated to ship in February 2013.

Källström said he thinks of Memoto as "a small, really tiny robot sitting there taking notes, like 'Oh, I have to tell Martin about this later.'" Its creator boasts that it will allow users to "revisit any moment of your past."

"Imagine if you could capture and relive every memorable moment of your life," Källström said in a press release when the Memoto concept was unveiled in October. "With Memoto, you can effortlessly travel back in time to that moment when you met the love of your life, the day your daughter took her first step, or that night you laughed the night away with friends."

For our "Life As ..." series, we spoke with Källström about life with total recall and how our relationships, minds and perceptions of privacy could be reshaped by his mini-camera.

How will our memories -- and relationships -- change if they're not only remembered, but documented? It's important to forget. There's a function to memory transforming over time, and perhaps sometimes you need to get rid of some memories to develop as a person or to free yourself from something in the past.

I don't want to create a machine that tells people who they really are and overrides their memories of a situation. I feel like over time my memories of something are more important than the photos or videos that I have. I haven't actually looked at my own wedding video because I don't want that to override the beautiful memories I have of that occasion. I have memories of my wedding from my own viewpoint, and I really don't want to replace those memories with something that a video camera saw from further away at a different angle.

People will have to develop a way to relate to their documents. People may be better off not looking at every moment of their past.

What do you predict will be the most important ramification of this device? You actually can preserve memories of everyday situations. When I look back at what parts of my life I have documented or captured in photos, it's really the moments where you're all dressed up, everyone is smiling, it's Christmas, it's a birthday. Those are important moments, but I think it's important to realize the power of everyday moments as well. Those moments should be given more value. The in-betweens are getting lost more and more.

Sadly, I've lost both my parents, and I really feel that my memories of them are fading much more quickly than I'd like them to. What's left are the stories we've always told each other about what we experienced ... and the photos that have ended up in albums. 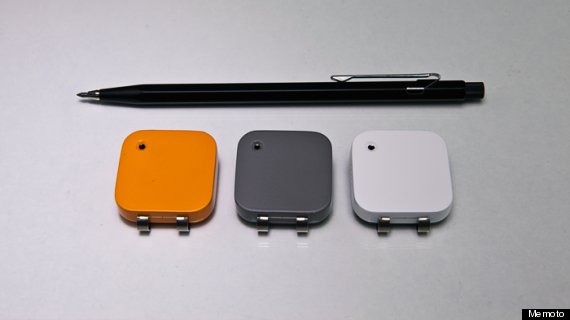 How did you dream up the Memoto lifelogging camera? For a long time, I've been the sort of person that has had the urge to document my life, but I've never been very successful at it. At the beginning [of the project], I wasn't looking into taking pictures, but gathering as much data as possible and making it very, very effortless.

What happens to privacy when everyone can record each other at all times? Will it be lost? I don't think we should limit the development of technology just because of privacy issues. You really can't expect lawmakers to move as quickly [as the technology], and they really shouldn't because then they might make mistakes that have negative consequences. That's why it's important to develop ethics with the technology, so we think consciously about the consequences of people using the technology that we develop.

So what ethics have you built into Memoto? It's one ethical choice to take a photo. It's another to then publish it and share it with someone else. By separating that choice to really two decisions instead of one, we're making it easier for people to respect each other.

One example of how we think about privacy is that we made the decision not to put an on/off switch on the camera because if I'm in a situation where it's inappropriate to take pictures, like I'm going into the locker room at the gym, if I switch off Memoto with a small button, then other people would still feel uncomfortable and think, "Am I being photographed right now or not?" Instead we built in a function that makes Memoto turn itself off when it's put someplace that's dark. So you have to take it off physically [to turn it off], so other people won't be uncomfortable.

Will the knowledge that we can rely on a camera to remember all the details for us make our memories atrophy? I think what happens is that you can use your brain for other stuff. If you relieve your brain from one thing, it uses that extra bandwidth for something else.

The biggest relief that I'm looking for with Memoto is the ability to capture memories right when you're living them in the moment. You get rid of the thought of "I have to pick up my camera and put a thing between me and reality right now, in this moment where everything feels good."

What do you envision as the future of wearable computers and lifelogging devices? How do you hope the technology will evolve? I want technology to disappear in the sense that I shouldn't be so much aware of it as we are now.

Looking 10 years ahead, I hope I'm able to have the same computational power or technology with me, but that it will have disappeared totally so that I'm no longer carrying something around -- it's somehow with me and I can use it, but it's not a thing that I have. It's something that's perhaps in my clothes or perhaps my glasses. It's making technology disappear out of our lives, but still giving us super powers without any implications in terms of us having more stuff, more things in our lives.

This interview has been edited and condensed for clarity. See the rest of HuffPost's "Life As ..." series here.