Michael Steele is running a bit late to the latest "Let's Frighten The Villagers With Lies" party, but, as TPM's Rachel Slajda points out, he's plunging in "feet first." At issue is the so-called "death book," which is actually a pamphlet called "Your Life, Your Choices: Planning for Future Medical Decisions." If the pamphlet very explicitly does NOT attempt to shepherd veterans in the direction of assisted suicide. Naturally, Steele was on Fox News this morning, intent on making everyone to think the opposite:

"And if you want an example of bad public policy, just look at the situation with our veterans, when you have a manual out there telling our veterans stuff like, 'are you really of value to your community,' you know, encouraging them to commit suicide. I mean, this is crazy coming from the government, and this is exactly what concerns people and puts them in fear of what the government control of health care will look like.'

Q: Can I specify that I want assisted suicide in my directive?

A: No. Assisted suicide is currently illegal. However, even if it becomes legal, the person making the request would have to be competent and able to change their mind at the time of the suicide. Advance directives only go into effect when you are no longer competent to make decisions.

Here's another section of the pamphlet, which explicitly does not hound veterans into the great beyond: 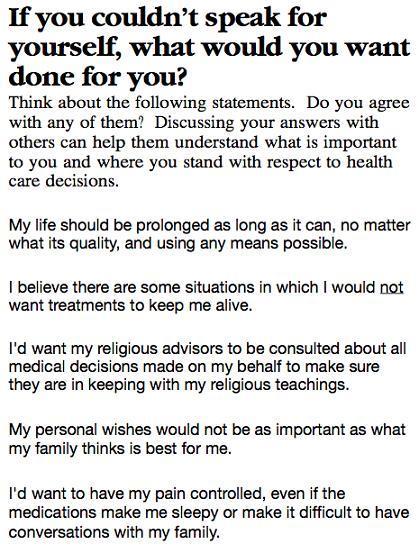 As Richard Smith at VetVoice mocks: "I feel like I've been brainwashed into pulling the plug already. Really, if the document was really trying to get veterans to pull the plug on themselves, then first suggesting to them that their life should be prolonged at all costs is a pretty stupid way to do it."

Jonah Goldberg, naturally, compared the pamphlet to "Nazi eugenics," because that's how the Nazis carried out their eugenics program: PAMPHLET-INDUCED REVERSE PSYCHOLOGY.