If you found life on Mars, would you recognize it?

Cyprien Verseux explores life in space. He's currently living in an 11-meter-diameter dome in isolation on the slopes of the Mauna Loa volcano (read his account of the mission here), in Hawaii with six other scientists and engineers, emulating life on Mars. Outside Hawaii, he is a PhD student in the group of Daniela Billi, where he is involved in the BIOMEX experiment. This mission explores what happens when you leave microbes in space for two years - and what that tells you about life on Mars and beyond.

It is no secret: Mars may have harbored life. However, you are right to suspect that Martians won't announce their presence to you in English. The planet's surface hasn't been hospitable for a very long time, so life on Mars probably had no time to evolve beyond simple microbes. Besides, this life may have gone extinct many millions of years ago. So, how do we find it?

First, we need to figure out how to recognize it, be it extinct or extant. Then, we need to find where it could survive besides Earth, so as to know where to look for it. So we went to space, took life with us, and are now bringing it back to Earth. The day I am writing those words, June 18th, microbes that have spent almost two years in space are coming back from the ISS under the seat of British astronaut Tim Peake. This is the culmination of years of work of the project BIOMEX, of which I have the honor to be part of.

These are exciting times: we'll finally get to see how space has affected the microbes. We will obtain new insights into what Martian life may have looked like in the past, and what we should be searching for today. Our work will help guide the search for life on Mars, which two upcoming rovers from the American, European and Russian Space Agencies will actively undertake. 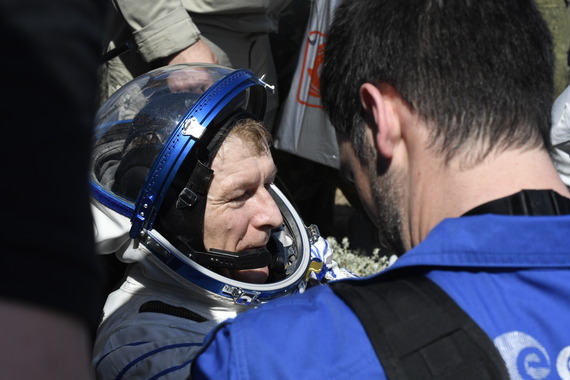 One strategy to look for life on Mars is to look for pieces of microbes with easily recognizable signs of life: pigments, lipids and proteins that emit light when excited with a laser, DNA that can be amplified by chemical reactions and reacts with sensors, structures that can be recognized by antibodies, and so on. Such features and the signals they emit are called biosignatures.

Finding biosignatures is the main objective of ExoMars, a joint mission of the European and Russian space agencies (ESA and Roscosmos). You may have heard of this mission recently: the first step was completed successfully on March 14th. That day, two objects were sent towards Mars: an orbiter (that will fly around Mars and search for specific gases), and a robot that will land on the surface. The robot will not do much (it will, basically, serve as an environmental station for a few days), but it will be used to test technologies for another - and more exciting - step: landing the ExoMars rover on the surface of Mars in January 2019. This rover will be able to drive around and look for biosignatures. It will be followed by another rover with this ability: NASA's Mars 2020.

But on Mars, the environment is quite different from Earth. There is strong radiation, a different atmosphere, and different minerals that may interact with molecules of interest. Would this, over time, destroy biosignatures? Would it modify their structures and signals? If so, we need a database of biosignatures that takes into account the Martian environment. Otherwise, we may not recognize life if it was (chemically) waving at us.

Generating this database on the ground is difficult. Yes, one can simulate some factors encountered beyond Earth, but some - for instance the radiation flux - cannot be mimicked accurately. That's why investigations are conducted in space. BIOMEX is part of these investigations. 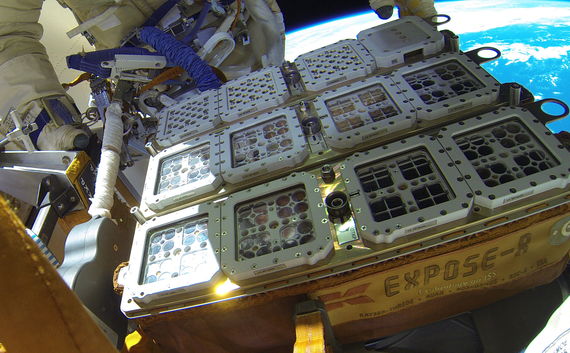 Installation of the experiment, outside the International Space Station, in August 2015. Credit: ESA.

BIOMEX (Biology and Mars Experiment) is an experiment conducted in the EXPOSE-R2 setup, a platform outside the International Space Station. It is led by Jean-Pierre de Vera, from the German Aerospace Center (DLR), together with a team from 27 institutes in 12 countries on three continents. The main purpose is to document the evolution of biosignatures under space and Mars-like conditions. Basically, to have something to compare to when we suspect that signals we detect on Mars could be microbes' remnants.

The first step of BIOMEX happened on the ground. Samples from a wide range of tough microbes were exposed to simulations of various factors found beyond Earth: radiation, Mars-like atmosphere, vacuum, and so on. What we needed to know was: would the methods we wanted to use work on samples coming back from space? The amount of such samples will be limited, and so will be the room for mistakes. Those simulations brought valuable insights into the fate of biosignatures on Mars.

The second step happened in space. In July 2014, the Progress M-24M spacecraft took off from the Baikonur Cosmodrome in Kazakhstan. It was unmanned, but not free of passengers - it actually carried billions of microbial astronauts inhabiting the EXPOSE-R2 platform. The platform was then attached outside the International Space Station, and the microbes were exposed to space for 480 days. Different samples were exposed to different combinations of radiations, vacuum, and/or Mars-like atmosphere, mixed or not mixed with analogues of Martian soil. It was a tough time to be a microbe!

Once the samples are back on Earth, the BIOMEX consortium will look at their biosignatures. What's more, we will also look at the resistance of microbes to space and Mars. Why? Keep reading.

So far, we have been talking about extinct life. Yes, finding signs of past Martian life would be amazing. But what about existent life? I assume that is what you are most curious about: is there life on Mars today?

One way to answer this question is to look at Mars' hospitability. Mars is not as comfortable as it used to be. The air pressure, surface temperatures, and low humidity prevent the persistence of liquid water, except for extremely salty brines. Ultraviolet radiation at low wavelengths, which quickly kills microbes, reaches Mars' surface (Earth's ozone blocks this for us). So do other kinds of radiation: galactic cosmic rays and solar energetic particles, against which Earth is also protected by its magnetic field and dense atmosphere. Temperatures are low and the soil is highly oxidized. I could go on, but you got the point. That being said, even though one should not expect the surface to be covered with microbes, there may be areas where life could persist. Ultraviolet radiation, which is so deadly on the surface, can be blocked by a thin layer of Martian soil. Liquid water may exist underground, where temperatures and pressures are high enough. Galactic cosmic rays and solar energetic particles are much harder to stop, but more and more studies indicate that they would not prevent microbial life. The more we learn about Mars, the more we discover potentials niches for life.

Another way to answer the question of whether life exists on Mars today is to look at whether life could have adapted to the planet's environment. Many microbes would probably not last long there, or at least not in the environment as we know it. And why should they? Life is good in a deep green forest, a gentle river or a human's bowel. There's no need for microbes to fend off high levels of radiation, extremely low pressure, drought, and extreme temperatures when they're in their comfort-zone. Doing so would be like investing in a flood insurance in the middle of the Sahara, or bear spray in Singapore: a waste of resources. But even on Earth, some microbes have had to adapt to more extreme conditions. They have colonized extremely dry deserts such as the Atacama, and extremely cold ones at the poles. Others thrive in the hot and acidic waters of Yellowstone, or the hypersaline environments of the Great Salt Lake in Utah. Could such microbes, called extremophiles, survive on Mars? By looking at how those microbes flying on board BIOMEX survive the experiment, we hope to bring new clues to answer this question. 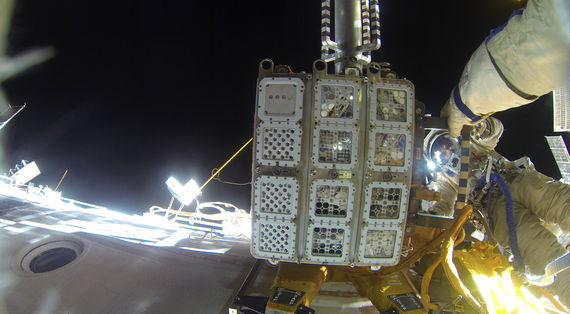 What are life's limits?

So far we have been talking about Mars but let's consider the search for life in our solar system, more generally. Ideally, we would look everywhere but this is, of course, far beyond our abilities: exploring a square meter on another planetary body is already a great challenge.

We need to figure out where life can reside in order to know where to look for it. For this, we expose microbes to extreme environments and look at how they deal with it. Then we can see where in space survivable conditions exist. I agree, it does not give a clear-cut answer: all living forms we know have evolved on Earth, and might have become more resistant under different circumstances. But there are not that many other options and it gives us, at least, a lower boundary. That is the third objective of BIOMEX: stretching life's limit to know where to look for it.

Can life hitch a ride on a rock?

What makes us think life on Mars will look anything like life on Earth? After all, couldn't life on Mars have features that we cannot even imagine, as suggested by numerous writers? That's not that likely. The thing is: if life ever existed on Mars, it is probably related to life on Earth. Large amounts of material have been transferred from Earth to Mars, and vice-versa, by impacts from asteroids or comets. And asteroid impacts on Earth and Mars are quite common - calculated on a geological time scale, so no, there's no need to invest in an underground bunker.

That being said, being ejected from one planet by an asteroid impact, surfing an ejectum and crashing on another planet is quite a ride. Could bacteria - or more primitive forms of life - survive it? Assuming microbes survive the impact of an asteroid "picking them up", and don't burn due to friction with the atmosphere, they must face low temperatures, radiation, vacuum, and a few other things you would not enjoy being exposed to. This is the fourth objective of BIOMEX: assessing the so-called "lithopanspermia" theory, a not-so-far-fetched possibility that life can be carried by rocks from one planet to another. In particular, we're looking into the possibility that life travelled from Earth to Mars... or vice versa.