In reporting an Atlantic piece on James Corner’s fantastic redesign of Cleveland’s Public Square, I was surprised by the strength of the city’s downtown revival. After a tailspin in the 1980s, Cleveland’s downtown population soared 32 percent from 1990 to 2000—the biggest rise of any Midwest city (including Chicago) and far above the regional average (7.7 percent), according to Brookings. The climb has continued at pace; last summer downtown reportedly reached an “all-time high” of 12,500, with an astonishing residential occupancy rate of 98 percent.

“Downtown Cleveland is an amazing turnaround success story,” he says. “The next generation is moving back in and really activating the place in a way that, if you haven't seen it in a long time, it makes it really exciting to go downtown. It's not what you think of when you think of Cleveland from a few decades ago.”

That Millennials are flocking to an American city is no revelation. But a new demographic study from the Center for Population Dynamics at Cleveland State University, led by researcher Richey Piiparinen, lends some powerful numbers to the discussion where Cleveland is concerned. The report shows all the ways Cleveland’s young people—those age 18 to 34 with college degrees, to be precise—are leading the charge back downtown.

Let’s take a closer look at some of the key metrics.

First let’s take the city as a whole. Following a lull in 2006, there’s been a 91 percent rise in the number of young residents with bachelor’s degrees—a “brain gain,” as Piiparinen and collaborators call it. Population has remained more or less stable for other age groups over the same period. While promising, the trends also lead to questions about how to make Cleveland more appealing for families, which in turn leads to projects like the new Public Square. 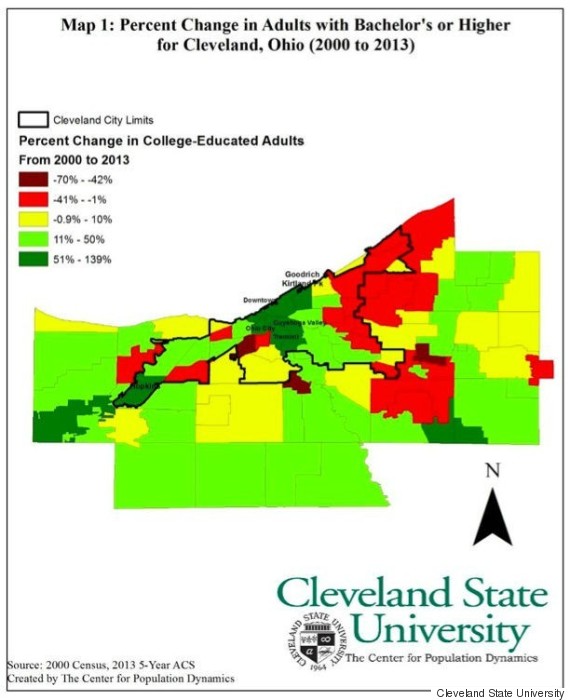 Now let’s narrow down to the neighborhood level. When it comes to college graduates of all ages, no part of Cleveland gained more of them than downtown did from 2000 to 2013. Nearly 2,000 degree-holders moved downtown during this period—a 139 percent rise. In fact, write Piiparinen and company, downtown Cleveland had the largest “brain gain” of all Cuyahoga County. 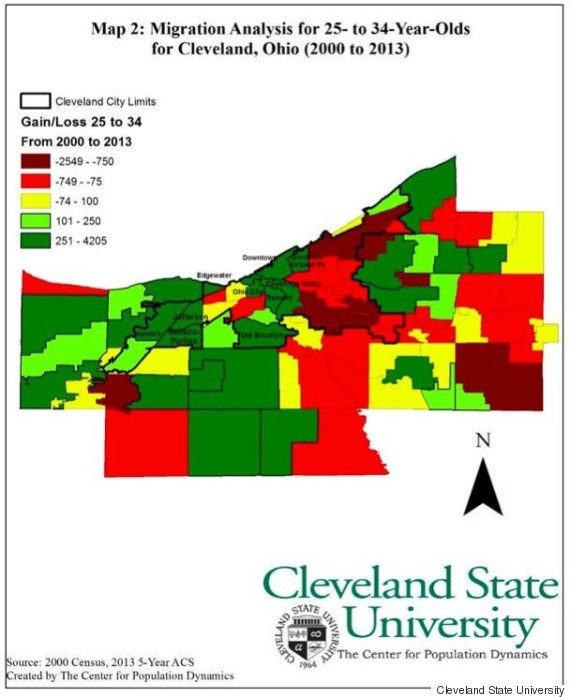 And when we focus on 25- to 34-year-olds at the neighborhood level, downtown Cleveland again leads the way. The area added some 1,628 residents from this age group from 2000 to 2013. Several other districts within a couple miles of the core also ranked high on this list: Tremont, Ohio City, Goodrich-Kirtland Park, and Cuyahoga Valley among them. 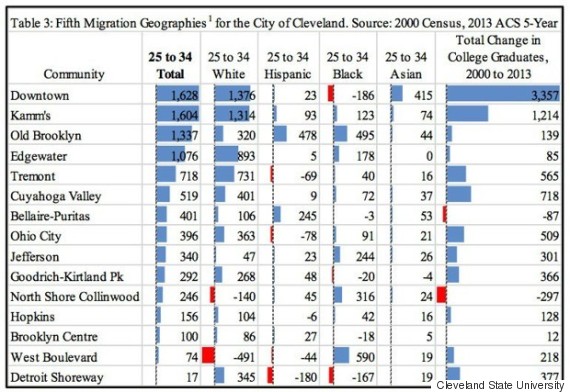 Not every race is benefiting from the downtown renaissance alike. Young whites make up the overwhelming majority of the population shift from 2000 to 2013, followed by young Asians. Hispanics age 25 to 34 more or less stayed put. The black population dropped in downtown during this period—raising concerns that some young African Americans are being priced out of the area.

And 4 possible reasons for the shift

The authors of the new report focus on two main reasons for Cleveland’s rebound among young workers. First is its lengthening list of residential amenities: “walkability, social connectivity, proximity to retail and nightlife, or more generally a preferred lifestyle.” By next summer locals can add Public Square to the pile.

There’s also the city’s emergence as an economic hub for professionals with advanced degrees—especially healthcare and education. In 1994, the city was home to roughly the same number of both high- and low-skilled jobs (64,875 and 62,084, respectively); by 2013 the gap had widened considerably, with nearly 150,000 jobs in Cleveland now requiring advanced degrees, to some 41,500 requiring a high school education. And no neighborhood has added more residents with advanced degrees than downtown: 828 since 2000, up 169 percent.

In writing about the “passion” of young Clevelanders for CityLab in 2013, Nona Willis Aronowitz added two more reasons to the trends. One is the relatively low cost of starting a business; the other is the relatively high influence you can have in national political campaigns.

Cleveland hasn’t escaped the problems of other growing metros—namely, income inequality. The urban scholar Alan Mallach, for one, has found that while some home values are rising in some central neighborhoods, they’ve fallen in the city as a whole. The authors of the Center for Population Dynamics report acknowledge these trends in their call for more affordable housing, especially in the areas attracting residents with advanced degrees. But overall they see these challenges as “the shadows of evolving opportunities” created by the city’s much-needed growth.

“Cleveland is on this track right now,” says Nelson\Nygaard’s David Fields. “It reminds us that we've got great cities of all scale. You don't necessarily have to be New York, Los Angeles, Chicago, or San Francisco to be a great city.”