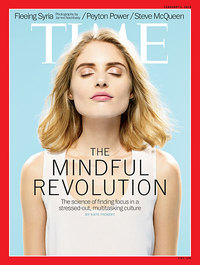 When I saw the recent Time magazine cover story, "The Mindful Revolution," it was déjà vu all over again. For one thing, Time alone has done at least two previous cover stories about the value of mental practices derived from Eastern spiritual disciplines. 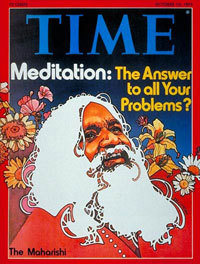 In 1975, Maharishi Mahesh Yogi adorned the cover, with the headline "Meditation: The Answer to All Your Problems?" That was when scientific research ferried Transcendental Meditation from the counterculture to the mainstream. 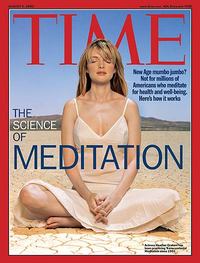 In 2003, actress Heather Graham decorated the cover, meditating with her eyes closed and her neckline plunging to her heart chakra. That headline read: "The Science of Meditation," with the already-dated reading line, "New Age mumbo jumbo? Not for millions of Americans who meditate for health and well-being."

Now another attractive, albeit anonymous, meditator graces the cover, and the copy below the headline reads, "The science of finding focus in a stressed-out, multi-tasking culture."

Countless other publications and TV shows have, of course, delivered the same message for decades now: Scientific research shows that practices adapted from Asia's yogis, monks, and sages are beneficial adjuncts to modern life. The details change over time, as techniques come into and out of vogue and investigative tools get more and more sophisticated. But the message is basically the same, and while it may seem old hat to many, it needs to be refreshed from time to time for each new wave of stressed-out, tensed-up, sleep-deprived citizens.

The article gave me that déjà vu feeling for another reason as well. Mainstream reporting about the subject is only slightly less careless than it was 40 years ago. Reporters still fail to make crucial distinctions.

Nowadays, the word "mindfulness" is being used, mindlessly, as a catch-all term for every method involving the use of attention. It is further implied that all such practices involve focusing, e.g., making an effort to concentrate on some object of perception. There are several problems with this.

First, a wide variety of practices are being subsumed under the umbrella term "mindfulness." They are practiced differently, and therefore can be expected to yield different results. To assume otherwise is a fallacy, yet the techniques are described as if they were all pretty much the same. That's misleading at best.

Some practices properly labeled mindfulness are done while the practitioner is actively moving about; some are done sitting or lying down quietly; some are done with eyes open; some are done with eyes closed. The objects of attention employed also vary: inanimate objects; human beings; sounds, sights, and tastes; breath; thoughts and feelings; mantras, etc. Some demand disciplined focus on the object of attention, while others call for a gentler kind of concentration. The spectrum of effort reflected in the instructions is wider than might be imagined.

Another source of confusion is that "mindfulness" is now being used to describe every type of meditation practice, even those for which the term is a bad fit. Mindfulness implies focusing on an object of concentration, and some forms of meditation do not require that at all. In fact, it is more accurate to call them mindemptiness, because they're meant to take the attention beyond sensory and mental experience to the realm of absolute silence.

Take, for instance, the now-familiar use of Sanksrit mantras in meditation. Not only are different mantras used in different teaching traditions, and not only are they assigned according to different sets of criteria, they are also used differently. Some practices demand rigorous concentration on a mantra; others are less intense, and treat the drifting mind gently; and still others are so effortless as to involve no concentration or focus at all. Indeed, the best-known mantra-based practice -- the one that introduced "mantra" to the global vocabulary when the Beatles took it up -- is Transcendental Meditation, whose teachers explicitly, pointedly, and repeatedly instruct students not to concentrate, and not to focus, and in fact not try to do anything.

I know that this is all too complex for a mass media article or TV report. But it's important for interested parties to understand that there are differences among the techniques we've imported from the Hindu and Buddhist repertoires (and make no mistake, that's where they come from, no matter how much they're secularized), and that differences in practice lead to differences in outcome. By being well-informed and discerning practitioners can better use of these valuable teachings, and we'll be less likely to distort, dilute, or corrupt them in the process.