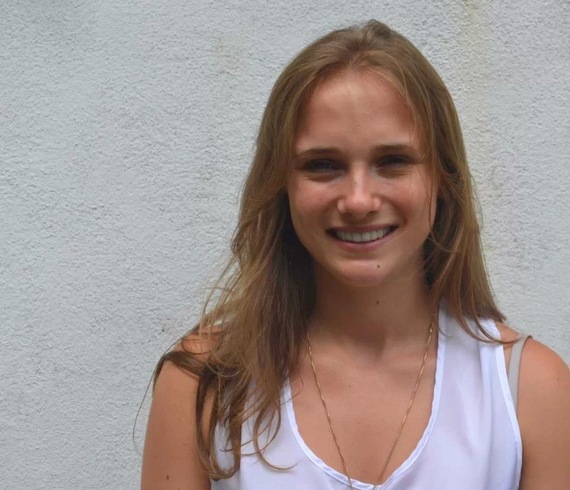 At twelve years old, I joined a life drawing class at the Art Students' League of New York. Initially, my eyes nervously avoided the naked stranger in the center of the room, so I looked around at the other students, who were all over the age of thirty. I felt an extraordinary sense of comfort emanating from them and I relaxed.

By ninth grade, I had fallen in love with life drawing. Depicting an unknown naked person became natural, yet I was not able to draw the person I should know most: myself. In my first art class at Fieldston, I was assigned to draw a self-portrait. My pencil danced around the page and I became increasingly frustrated as I scrutinized my features. There is an advantage to briefly looking in a mirror; the image does not stay clear in your mind and it's usually altered to your liking. I forced my gaze towards the reflection, failing to escape my imperfections and the tangle of emotions I possessed. Soon the sight of my own face unhinged me. After several classes, I still hadn't drawn a satisfying self-portrait. Although discouraged, I focused my passion on drawing others. I later concluded why I could not stomach completing a self-portrait. I was not comfortable with myself.

My struggle with the self-portrait was a symbol of my difficulty adjusting to a new school and environment. I spent elementary and middle school at the Rudolph Steiner School in a grade of 20 people. That had been a familiar world, yet Fieldston was like being in a subway station at rush hour. I felt forced to fend for myself. I jumped from person to person, looking for some personal connection. This search was fruitless until the second semester of freshman year, when I met Allegra in the one familiar place in this foreign world: my painting and drawing class.

Like me, Allegra was passionate about painting. After admiring each other's work, we started talking. Our different approaches to painting influenced one another. Allegra was fearless when painting, smearing globs of paint in every possible direction, while I meticulously attempted to make my painting look exactly like its reference. Not only did her artistic approach help me improve my artwork, but it also helped with my social endeavors. Experiencing her fearlessness drove me to uncover my own spunk and confidence, which was the stepping-stone I needed to create the "me" I would later accept.

Soon after, I had rediscovered the girl I was at Steiner: the precocious person who gets over excited about something as random as the music playing in a bookstore, who hugs someone she has only spoken to once, and who laughs at a joke even if nobody else does. I even acquired some qualities that I did not have at Steiner. I have become more outgoing and can strike up an enthusiastic conversation with any unknown classmate as if we are the best of friends. This change manifested as I became more experimental in my art; connecting faces and figures to their surroundings.

This past summer, I was participating in an art program in Putney, Vermont when my drawing teacher declared, "Today's assignment will be to make self-portraits." As soon as I heard those words, my entire body drooped, and I reluctantly braced myself for the battle ahead. However, as I dragged my pencil along the page, there was a different reaction than I anticipated. As I spent the next four hours drawing myself, the unease drifted away. I wasn't just copying the reflection; I felt comfortable with it, and communicated that ease through marks of graphite. I enjoyed myself because I knew the person in the mirror.

Sophia Baraschi-Ehrlich is a Freshman at Skidmore College and a 2012 graduate of the Ethical Culture Fieldston School.