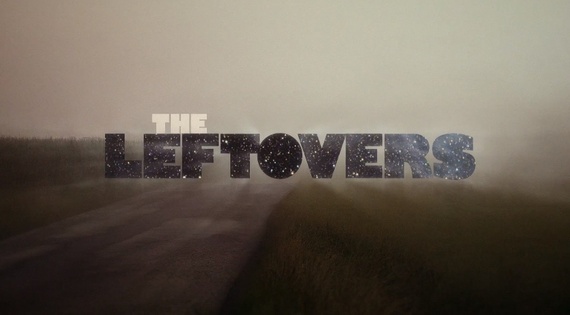 *Spoiler alerts for Seasons 1 and 2 of The Leftovers.*

In spite of seeing global theologian Reza Aslan was a consultant on HBO's magnificent The Leftovers, it never occurred to me to frame the show as a narrative steeped in religious subtext: what resonated most to me about the October 14 Departure was its symbolism to surviving trauma. In the case of The Leftovers, a collective trauma affecting the entire planet -- an end of the world as everyone knew it -- and how people did or didn't find ways to move forward after unspeakable tragedy and unexplained loss. As a gun crime survivor myself, I couldn't help but think about not just the victims of each mass shooting, but all the survivors, and their families, their friends, colleagues, partners, whose lives will now also potentially be shaped by that violence either in major or oblique ways. While someone could write a thesis on religion and spirituality in The Leftovers, I saw it as trauma therapy through television, and one of the most healing experiences for my own PTSD in recent years.

In real life we do our best to hide (the bulk of) our pain from other people. After a bad night, we put on a nice outfit and a big smile and only a trusted few -- if even that many -- ever get to see us with our pain exposed to another's eyes. One of my favorite things about The Leftovers, other than the presence of more equitable male full frontal nudity than any other show on television, is the fact that every single character walks around with their pain exposed for all to see. From the Garveys to the Murphys, Reverend Jamison and Nora, even the self-serving and self-righteous band of Guilty Remnants wear their pain front and center while causing such new pain for others. Maybe that's why there's so much male full frontal in The Leftovers: women's bodies are so laid bare, sexualized, and objectified at every turn that the naked female form no longer signifies the kind of vulnerability that being naked can bring with it. We're so unaccustomed to seeing physically exposed men in mainstream media, and each of the moments where a male form was exposed -- Tommy after being raped, Matt Jamison in the stockade, even Kevin Garvey's grey sweatpants -- signified grand moments of vulnerability and the exposure of not just their bodies, but something far more profound.

And in the exposing of vulnerability, of pain, of such great loss, is the seeking for answers why. Why did this happen? Where did they go now that they're gone? Are they safe? Are they at peace? Why not me? Why did I survive and others didn't? Is there a purpose behind it all?

The Leftovers is filled with seekers. The Guilty Remnant find a cruel solace in ensuring nobody ever forgets the collective tragedy, and in Season 2 we saw their presence almost wholly distilled down to the singularly toxic figures of Patty Levin and Meg Abbott. Holy Wayne had his magical hugs, and Tommy follows in his footsteps after a series of unsuccessful seeking of his own. Nora Dunne had her bullet-proof vest, inviting prostitutes to her home to shoot her just so she can feel something, anything, even if it's just a bruised chest. Kevin Garvey, and his father, seek sanity and an end to the voices in their heads haunting them. So many people, searching for answers, desperate for a redemption that would never come.

During the first and acute years of PTSD I was a seeker, too. Even though I am a lapsed Catholic -- my marginal belief in the system collapsed the moment I learned of pedophile priests and cover-ups of magnificent proportions -- after surviving the gun crime that took the life of my friend I began to go to church again, and with all different kinds of people. Catholics, Unitarians, Baptists, Lutherans, it didn't matter. I found small solace in the familiar church rituals, but no answers for when the pain would stop or where I could put it. Then came Buddhism and meditation, which helped me sleep better at night and begin to understand the complexities of compassion. While self-studying Buddhism, I was working as a freelance reporter covering indigenous issues at the U.N. in Geneva, and had the privilege of meeting elders from all around the world who took me under their shaman wings. They were able to give me a place to put my pain: back into the Earth through the sacred Sweat Lodge ceremony. The shadows behind my eyes lessened and I began to feel like myself again. But then the elders would go back to their homes, and I'd be back to seeking. Spirits, fairies, magic, visions, new and old pagan traditions, tattoos, desperate sorts of love, anything to find meaning. And in the end, none of it helped. Not really. I had to come to terms with the fact that there was no good reason why so many were gone and I wasn't. I finally understood that nothing happens for a reason. Things just happen. And shit happens because people make choices, and they often make bad choices that affect the lives of others. Whatever deities or energies or forces that be don't "Give you as much as you can handle." That would mean all those people fleeing war or religious persecution or being murdered have been chosen to suffer because they can handle it? I don't think so. And what a pretentious, sanctimonious, and narcissistic philosophy indeed.

In The Leftovers, John Murphy was so angry at Miracle because he knew from the time he was a child that nobody was safe from pain: even in the Jarden of Eden a little boy could be molested by his future father-in-law, and his wife could lose her hearing, and his daughter suffer from epilepsy. "There are no miracles in Miracles," should read the Murphy family crest. There are no miracles anywhere. There is only getting on with things and loving each other, if that's even still possible after so much tragedy. And all those millions of people who visited Miracle from around the world, also seeking, also hoping to find answers that would never come, and the town itself capitalizing off their pain -- no wonder Evie joined the Guilty Remnant: The hypocrisy embodied in the very idea of her hometown was staggering, and watching all those hurting people come and go without resolution would take its toll on any aware person.

Like Hannibal before it, The Leftovers revealed dark truths about myself, and my own healing process, and gave me a sanctuary to visit where I could see others openly struggling like me to move on after the end of the world. I learned that I have a deep and red rage swirling inside me like Lost's Smoke Monster, and The Leftovers converted the amorphous shape into sharp edges and teeth, my own personal version of the Guilty Remnant, giving my anger the faces and figures it needs in order for the next phase of healing to begin. I learned that, like Laurie Garvey, I was running these shadows over with my car and still wondering why I wasn't feeling better. What I needed to do was like Kevin and take those demons' hands, walk them to my own sacred places, and do battle. To battle with eyes open in clarity, not fear.

There are so many Departures in a person's life. The Departure of innocence and childhood -- often taken too soon. The Departure of physical integrity through illness or accident or violence. The Departure of mental stability through trauma or abuse. These ruptures end up shaping us, for better or worse, into the broken adults we inevitably all become. Nobody is free of pain or horror or trauma, and blessed are those with the emotional, physical, and economic resources to heal.

Violent trauma and loss is its own kind of death, and even if we don't want it or ask for it, we are given opportunities for rebirth, like Kevin Garvey climbing out of his own grave and Mary Jamison returning from mental limbo. The Leftovers gives me a safe place to turn my gaze and unabashedly and tearfully bask in knowing that I am not alone in this pain, in this struggle to move forward, in the search for answers even if they are never satisfactory. The Leftovers captured something fundamental about surviving trauma that I have yet to see in any other media, and I start to understand that maybe in all these years of seeking answers, I finally found exactly what I was looking for and needed in these 20 aired episodes.

With the welcome news of its renewal for a third and final season, I hope that there will be more answers not just about the beautifully drawn characters and places featured who have become like family -- not to mention the superb writing, acting, and directing -- but also more depths of personal healing to plumb when The Leftovers returns next year. Maybe there will be miracles in Miracle after all.