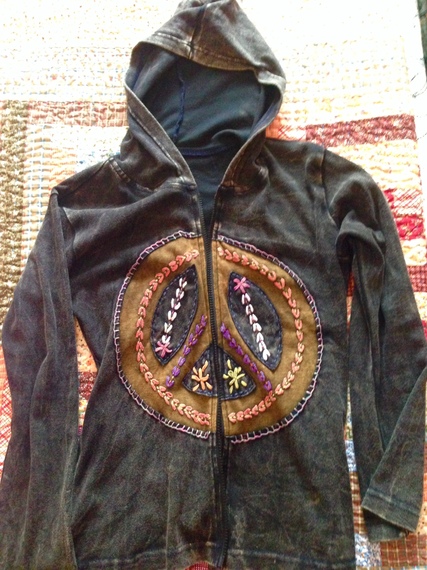 I often chide (lovingly) the fashion world's fickleness, where everything old is new, over and over again, where from overalls to tie widths, the latest "must haves" are nothing but re-hashed, albeit tweaked oldies but goodies, re-worked so as to conjure up new perceived need, which is of course nothing more than the name of the (retail, profit-based) game.

Happily, fashion also moves society forward and can speak for us in some of the most fun ways, despite its repeated backwards steps. For every stumble-prone, foolishly crafted high heel we have to contend with, we have a T-shirt that can do its free speech thing with as much effectiveness as any one wearable could ever hope to billboard. Where we have a constraining pair of pants or shorts, we can still look back on its forerunner, the bloomer, which was as revolutionary a feminist statement as was ever any parade of militant protestors.

So now, as societal reflector (which Art and its wearable component, fashion, both are) we have the hoodie, as worn by a young man whose death will forever remain in deep and ugly question, as worn by hundreds of thousands in their everyday (my sons and daughter included), that is now being proposed for legislation in Oklahoma, thanks to Senator Don Barrington. Evidently, if he and those of his ilk have their way, to wear the hoodie in the way in which it was intended will be to net the wearer a fine of no less than $500.00.

It snowed today -- the first proper snow of a Midwest winter. It's cold out and for me a time to don heavy sweaters and coats (egads, my parka has a hood!). But in light of this remarkable attempt at legislative (ahem) genius, I will perhaps have to make my beloved lil hoodie part of my next outfit.

Yes, to make a lil statement: That I and any other have the right to freedom of this expression, which neither impinges on any other's right to happiness nor their right of personal expression. This must be protected with everything we've got. Henceforward, this will be worn as my lil way of "just saying no" to censorship of this magnitude.