*Scroll down for photos.*

Hundreds of scientists and their families and friends – among thousands of invited guests – cheered and yelled "Go Juno!" as the unmanned Atlas rocket blasted into a clear midday sky Friday. It will take five years to reach Jupiter, the solar system's most massive and ancient planet.

"Next stop is Jupiter," exulted Scott Bolton, Juno's principal investigator and an astrophysicist at Southwest Research Institute in San Antonio.

"It's fantastic!" said Fran Bagenal, a planetary scientist at the University of Colorado at Boulder, who is also part of the NASA project. "Huge relief all around."

Within an hour of liftoff, Juno hurtled out of Earth's orbit at 24,000 mph on a roundabout course for Jupiter. It was expected to whip past the orbit of the moon in half a day, or early Saturday morning.

It is the first step in Juno's 1.7 billion-mile voyage to the gas giant Jupiter, just two planets away but altogether different from Earth and next-door neighbor Mars.

Juno is solar powered, a first for a spacecraft meant to roam so far from the sun. The three huge solar panels popped open an hour into the flight, each one stretching as long and wide as a tractor-trailer. Previous spacecraft to the outer planets have relied on nuclear energy.

With Juno, scientists hope to answer some of the most fundamental questions of our solar system.

"How Jupiter formed. How it evolved. What really happened early in the solar system that eventually led to all of us," Bolton said earlier in the week.

Bolton said Jupiter is like a time capsule. It got most of the leftovers from the sun's creation nearly 5 billion years ago – hence the planet's immense size – and its enormous gravity field has enabled it to hold onto that original material.

Juno will venture much closer to Jupiter than any of the eight spacecraft that have visited since the 1970s, most of them just passing by. It's by far the most focused and elaborate Jupiter mission.

"We look deeper. We go much closer. We're going over the poles. So we're doing a lot of new things that have never been done, and we're going to get all this brand-new information," Bolton said.

The $1.1 billion mission – which will end with Juno taking a fatal plunge into Jupiter in 2017 – kicks off a flurry of astronomy missions by NASA.

Next up is Grail, twin spacecraft with a $496 million price tag that will be launched next month and go into orbit around Earth's moon. Then comes the $2.5 billion Curiosity, a six-wheeled, jeep-size rover that will blast off for Mars at the end of November in search of environments conducive to life.

Unlike many other NASA missions, this one came in on cost and on time. It's relatively inexpensive; the Cassini probe launched in 1997 to Saturn, by way of Jupiter, cost $3.4 billion.

Exploring the solar system is all about "unlocking the mysteries of how we got here" and is worth the money it takes to get those answers, said Jim Adams, NASA's deputy director of planetary science.

"These investments are really in ourselves," added Bolton.

Until Americans start flying into space again from U.S. soil, NASA's science missions will provide the launch excitement. The goal is to send astronauts to an asteroid by 2025 and to Mars in the mid-2030s.

"The public ... needs to understand that NASA's more than about the shuttle," Bolton noted.

A few special passengers actually are riding aboard Juno.

Attached to the probe are three little Lego figures specially made of space-grade aluminum. They represent the Italian physicist Galileo, who discovered Jupiter's four biggest moons; the Roman god Jupiter; and his wife Juno, for whom the spacecraft is named.

The oblong orbit will bring Juno within 3,100 miles of the cloudtops and right over the most powerful auroras in the solar system. In fact, that's how the spacecraft got its name – Juno peered through clouds to keep tabs on her husband, Jupiter.

Juno will circle the planet 33 times, each orbit lasting 11 days for a grand total of one year.

By mission's end, "we've essentially dropped a net around the planet with all of our measurements," Bolton said. That's crucial for understanding Jupiter's invisible gravity and magnetic force fields.

Radiation is so intense around Jupiter that Bolton and his team put Juno's most sensitive electronics inside a titanium vault – an armored tank, as he calls it.

Juno's experiments also will attempt to ascertain the abundance of water, and oxygen, in Jupiter's atmosphere, and determine whether the core of the planet is solid or gaseous.

Juno bears nine instruments, including a wide-angle color camera, JunoCam, that will beam back images that the public can turn into photos.

The spacecraft also bears a small Italian-supplied plaque honoring Galileo. It shows his self-portrait, as well as his description of observing Jupiter's moons, in his own handwriting from 1610.

Check out photos of the launch (below).

NASA Juno Spacecraft Blasts Off On 5-Year Trip To Jupiter 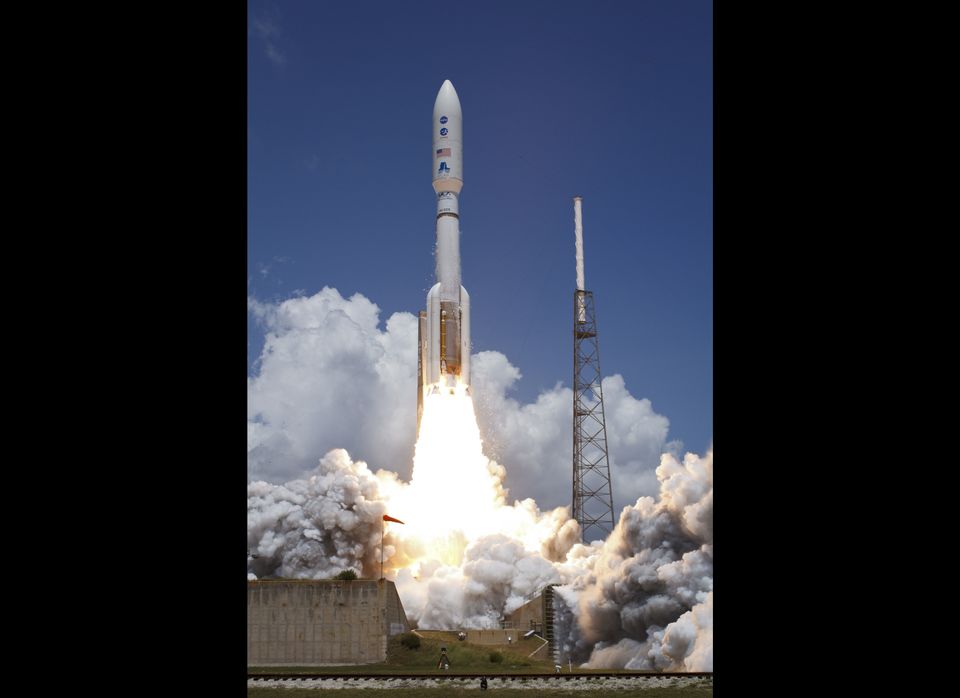