Individuals arrested while protesting the upcoming NATO summit in Chicago could be bound for the suburbs, as the city is short on other options in the event of mass arrests when it hosts the meeting of world leaders next month.

Cook County Sheriff Tom Dart suggested this weekend that the Joliet Correctional Center, which has sat empty for roughly a decade, could be used to house those arrested for more serious offenses during the summit, which will be held May 20-21 at McCormick Place in downtown Chicago.

Dart said, according to the Chicago Sun-Times, that the use of the Joliet prison is a better option than other ideas that the department has floated, such as setting up tents in the yard at Cook County Jail.

"If it’s functional, it wouldn’t take a lot of manpower to monitor. Transportation would be a straight shot down I-55," Dart said of the Joliet facility, according to the Sun-Times. "The only thing everybody agrees is this is unpredictable. We’re trying to keep that in mind."

But the idea appears to be just that -- an idea -- at this point. Joliet Mayor Tom Giarrante told CBS Chicago he doesn't see the usage of the long-shuttered suburban prison as an option on the table.

"The cells are very rusty, the paint’s peeling. I don’t see at all how they can use the cells at all," Giarrante told CBS. "They could put the tents in there, but they couldn’t expect the people, whoever they arrest, to live in there without water and electricity."

Andy Thayer, spokesman for the Coalition Against NATO/G8 protest group, described Dart's suggestion as "totally absurd" because he said the prison was already "a hellhole" before it was shut down, CBS notes.

Adbusters, which previously put out the call for 50,000 activists to descend on Chicago to protest what was then slated to be the city's concurrent hosting of the NATO and G8 summits, renewed their rallying cry in a blog entry posted Friday.

The post calls for a "swarm" of the NATO summit in Chicago as part of the "May 2012 insurrection … thirty-one magical days beginning this Tuesday, May 1."

"For a few days, maybe for a full month, we act as if we already live in a world run by people, not corporations," the post reads. "We tell the military elites there to stop their saber rattling against Iran, halt the global arms race and get behind what the majority of the people on Earth want: a nuclear-free world starting with a nuclear-free Middle East that includes both Iran and Israel."

Protesters arriving as early as Tuesday in Chicago's Loop could come face-to-face with armed federal law enforcement agents. The Federal Protective Service, clad in battle gear, will reportedly be on hand to secure a "Red Zone" area in the Loop including federal buildings such as the Dirksen Federal Courthouse and the Metropolitan Correctional Center, beginning this week. City officials were not given advance notice of the federal operation.

NATO protesters last week unveiled what they claim the Secret Service's McCormick Place security perimeter and their subsequently tweaked demonstration plans. The group said the security boundaries will extend west from Lake Michigan to the Dan Ryan Expressway. The northern boundary, protesters say, is fluid, varying between 21st Street and West Roosevelt depending on summit activities and the southern boundary is I-55. The Secret Service would not say whether their report was valid.

Amidst the speculation of how large demonstrations against the NATO gathering will be, the city on Friday announced that it had reversed course on its previous plan to continue to enforce the state's controversial eavesdropping law -- which bars the audio recording of conversations unless all involved parties, specifically police officers, agree to it. Violating the law is punishable with a sentence of up to 15 years in prison.

Steve Patton, Chicago's corporation counsel, described the decision as "a recognition that while the law is still on the books, it is currently being constitutionally challenged, coupled with the fact that the police are going to have other things to focus on during the summit," according to the Chicago Tribune.

Chicago Mayor Rahm Emanuel previously emphasized that journalists covering the summit would not have to worry about being handcuffed for doing their jobs -- but it remained unclear whether bloggers and non-journalist activists would be immune from arrest for violating the contentious law.

Check out some of the developments that have preceded the NATO summit's arrival in Chicago: 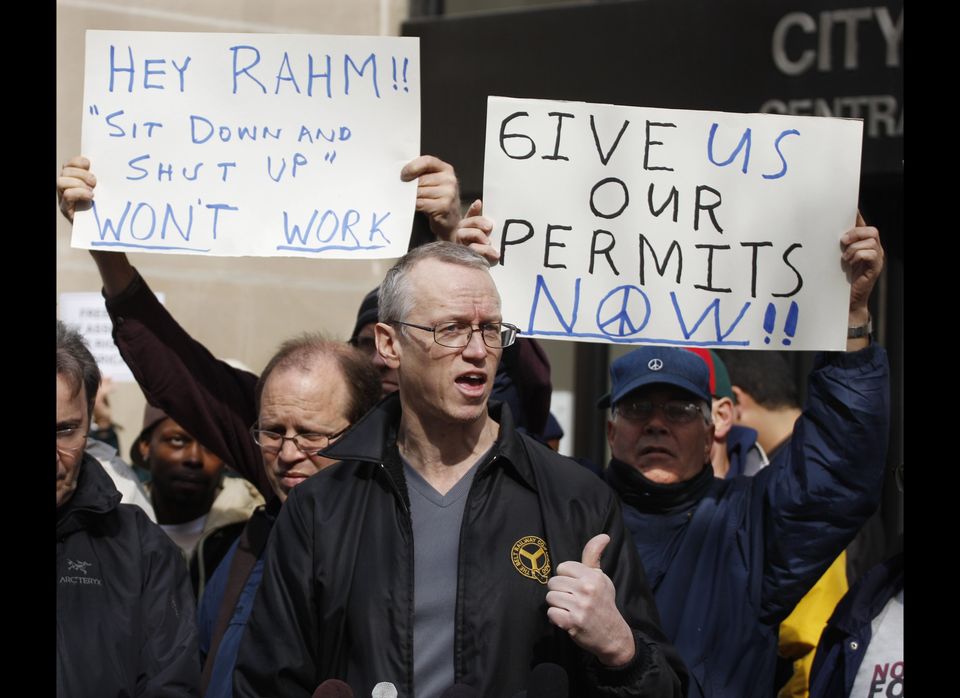 1 / 14
Andy Thayer, center, joins other activists outside the City of Chicago Central Hearing Facility Tuesday, March 27, 2012, in Chicago, as they appeal a city denial of their request to hold a march during the upcoming NATO Summit. Delegations for dozens of world leaders visiting Chicago for the NATO Summit will test city resources, a city transportation official testified Tuesday during the hearing. Organizers have promised to file a lawsuit if the city rules against them. (AP Photo/M. Spencer Green)