“ASSEMBLAGE“ is an inquiry into the different ways artists utilize performance and technology to explore and express different notions of identity. An effort to push forward marginalized artists with a focus on people of color, non-western nationalities and those along the queer/trans spectrum, “ASSEMBLAGE” provides a platform for analysis of how art and performance intersect with the lives of these individuals who are visibly and openly existing in the digital age. This is the first installment.

Irish-born artist and musician NEOCAMP has an other-worldly, ethereal aesthetic that gently demands your attention whenever he walks into the room. He has spent the past two years living and working in New York City, having never truly felt like his life had begun until moving there in 2012.

Queer individuals have routinely and historically been oppressed by the social and political climate in Ireland and they largely still experience these realities today. For this reason, NEOCAMP had few outlets to connect with other queer individuals or artists throughout his adolescence, except for one -- the Internet.

"Before leaving Ireland I was living purely through my work, which I think is true for a lot of queer artists living in small, repressed countries," NEOCAMP told The Huffington Post. "In Ireland I completely lived through the Internet. My Internet friends were really the only people in my life that I felt a commonality with in terms of what kind of work I was doing and what I was interested in. Then I came to New York and found an incredible, like-minded community and haven’t really looked back."

NEOCAMP is a part of a generation of artists who have found the Internet not only formative to their work, but fundamental to notions of queer community-building on a global level. This loose grouping of artists, who are largely stepping into the spotlight at this moment in time, are responsible for an understanding of cultural production that critics describe as Post-Internet. At its foundation, Post-Internet is a term used to talk about work that moves beyond using cyberspace to just create one's work, but utilizing the tools of the Internet age to provide commentary about other subjects and create tangible work in the real world.

In a similar way to how cultural notions of identity informed and shaped the trajectory of the Internet, the Internet is now informing notions of identity and shaping culture. Creators in specific parts of the world have rapid and instantaneous access to both information and one another. This reality has laid the groundwork for an age of radical agency and self-determination, as well as the ability to craft an idealized version of oneself in an infinite number of ways on the Web. Feeding these ideas back into a real, lived performance framework is at the heart of NEOCAMP.

The name itself -- NEOCAMP -- references both camp and theatricality. It instantly conjures up and activates the notion that the style and sensibility of camp as a mode of performance informs his work as an artist, as well as signaling his queer identity. He explained to The Huffington Post that NEOCAMP functions as a collation of systems of camp -- a way of consuming and performing culture with a sense of irony but also with a sense of sincerity.

"I’m really interested in this idea of traditional camp as being this mode of operation for queer culture as a way of debunking the straight patriarchy," NEOCAMP elaborated. "There's a lot of commonalities between traditional camp sensibilities and contemporary web culture -- using these ironic tropes as a way to subvert these mainstream systems. Meme culture, in particular, is inextricably linked to this history of camp... there’s so many links for me between these kind of drag sensibilities and queer performance as entertainment and this kind of avatar online experience."

In this way, NEOCAMP utilizes the tools of the Post-Internet age to inform his work as a performer and musician tangibly in the real world. Performance, to NEOCAMP, is not only a way of exploring identity in the digital age, but a way to creatively articulate what it means to be queer through a framework of camp sensibilities. 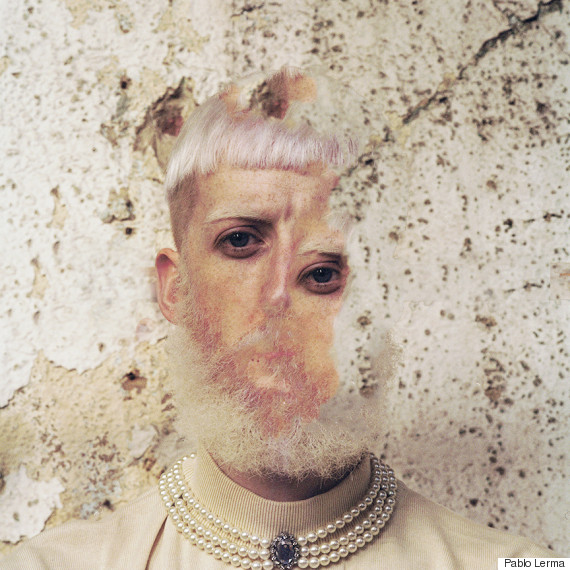 Apart from this, NEOCAMP's work and performance of camp also serves as a platform for questioning -- a questioning of what an imagined, idealized future could look like for queer people. The tropes of ironic "selfie-dom" and "avatar as god" that are prevalent throughout his work play on, what he views as, prevalent narcissism and self-involvement, not just within the queer community but as a larger social observation informed by the rise of technology.

"For queer performers, it’s often been this kind of play on narcissism and identity that's such a huge topic for queers," he elaborated. "I do feel like there's some sort of power play or an attempt to create this kind of perfected self as a kind of an armor, but also as a futuristic ideal or trying to create a vision of what is possible... I’ve become really interested in trying to play my work into this kind of expected pop language and make it digestible whilst all the while trying to propose a somewhat avant-garde idea of what it is to be a person."

But what about the role of queer performers in the trajectory of the mainstream lesbian, gay, bisexual and transgender (LGBT) movement? NEOCAMP doesn't think that, as a culture, we are anywhere near a nuanced or liberating understanding of queerness.

"I feel like people are willing to tolerate queers but they’re not willing to buy into them. They’re still seen as 'other' and I feel like we’re far away from mainstream audiences being ready to try to understand and identify with queer performers, artists and musicians across the board... That is part of the much larger battle that we're facing now."

NEOCAMP is currently working on an album, "wavewave," with an expected release date at some point this year. Head here to visit his Instagram or here for his Twitter. Check HuffPost Gay Voices next weekend for the second installment in "ASSEMBLAGE" and a continued analysis of the intersections of art, performance, queerness, identity and technology.