Our readers have confirmed: they are, indeed, waiting for-freaking-ever to get some discs from Netflix. These include classic films, animated movies, television series, and new DVD releases. Is there some kind of nationwide DVD shortage, or is Netflix trying to strangle its DVD business?

The logic to the long waits may have something to do with which distribution center is the closest to each reader. Of course, we did contact Netflix to find out whether they had anything to say about the apparent shortages, and they didn’t respond to us. Not that we expected them to: either they aren’t good at keeping their distribution centers stocked with discs, or they are deliberately trying to kill off the DVD portion of their business. They wouldn’t want to admit to either of those, we’re sure.

Some readers reported seeing that all titles in their DVD queues said “Very Long Wait,” but that this was a glitch in the system that Netflix admitted to, and it resolved itself.

Eric sent along this screen grab from the middle of his queue, pointing out that most of the titles that he’s waiting for are “a mix of classics and second- or third-rate movies that people can’t be clamoring for that much.” Most of them aren’t in demand, but aren’t out of print, either. 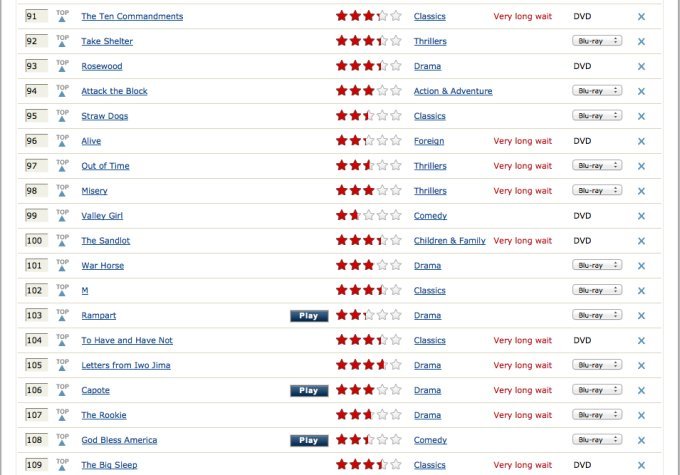 “Every time we call Netflix they are VERY kind and polite, but seem to just blow the proverbial hot air up the rear chute,” writes MZ, who sent along this screen shot of his own queue. 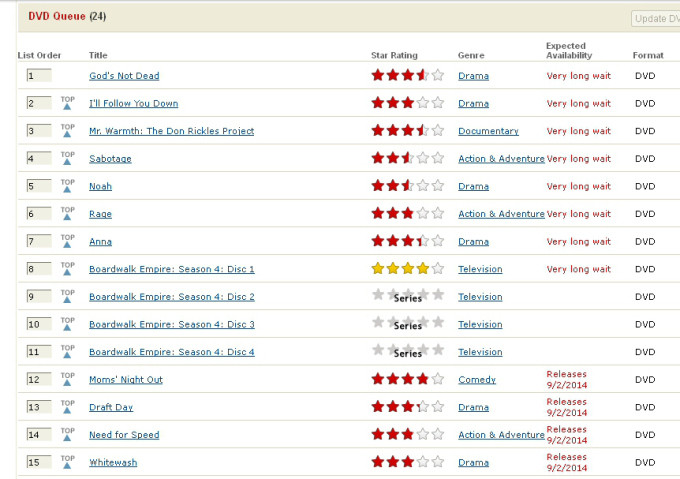 “Guess we will soon have to go back to the video store if Netflix doesn’t correct the problem,” MZ added. If you even have access to a video store: in my town, there’s Redbox and the public library.

Philippe told us that he can’t figure out the logic to which discs there are shortages of, and which there aren’t. “We had the urge to watch Friends again, and it’s rather random what is ‘Very long wait': Season 2 Disc 1, Season 3 Disc 3, Season 4 Disc 4, but none of the other ones in between.” It’s possible that those discs contain very famous episodes, and people only want to watch those. Or they’re particularly boring and other Netflix subscribers take a long time to finish watching and send them back. It’s difficult to guess.

Reader Laura reported a similar experience with some even older TV shows. “My husband was expecting discs of TV shows ‘The Dukes of Hazzard’ (try not to judge) and ‘Taxi’. Instead he’s getting ‘The Shining’ and some other random movie due to a ‘very long wait’ for 30-year old TV shows.”

Shabadoo reports that these two films at the top of his queue have been there for two years. At this point, he’s not even all that interested in seeing them, but keeps them “as an experiment just to see what’ll happen.”

One interesting pattern that we noticed is that many Disney films feature very long waits. We received multiple complaints from children of the ’90s who want to show their own children “Aladdin,” but the DVD is out of print. Apparently Netflix’s few copies were very in demand. (These complaints arrived during the week before Robin Williams, star of that movie, died on August 11th: the disc may be in demand even more now.) How long have people been waiting? On August 10, Kevin reported that he’s been waiting in line to see “Aladdin” for two years. 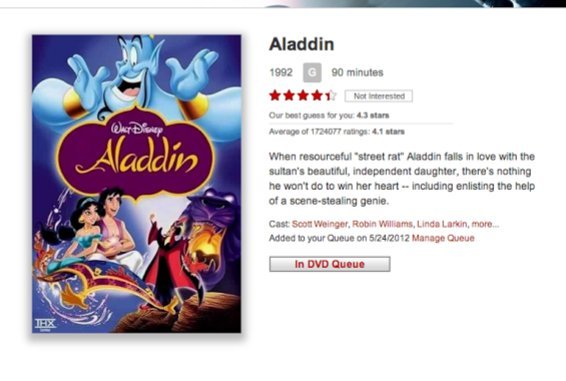 “Whether Netflix is doing this intentionally to kill off its DVD business or they’re just grossly incompetent, I do not know,” mused Eric, whose queue of movies that people aren’t “clamoring over” we shared above. “Not sure which would be worse, actually.”

If you’re a fan of watching DVDs and content that won’t be licensed for streaming any time soon, the worse scenario would be that Netflix is killing off their classic disc-by-mail service intentionally. Mismanagement can be fixed with a DVD-buying spree; but if Netflix wants to end the service, that’s what they’re going to do.

Which is a shame, if you like classic films, obscure documentaries, or foreign films. Readers report lengthy delays for everything from Jack Lemmon comedies to recently-released Bollywood films. “The Netflix DVD archives, in its heyday, was the largest single collection of movies that any average consumer has ever had access to in the history of human civilization,” reader James pointed out in an e-mail. It’s true: it would be difficult for any one Blockbuster store to keep that kind of variety on hand.

Of course, there is also a way that you can turn this problem to your advantage, if you’re not a voracious DVD-watcher. Reader Dave reports that he is able to use the discs with lengthy waits to his advantage, and sometimes take two discs at a time out, instead of the one disc that he pays for. Sort of. He explains:

I actually use the waiting lengths to my advantage. I have the bare bones 1 DVD at a time plan and have discovered that by rearranging the queue, I can get an extra DVD out of them.

I place the “very long wait” DVDs are at top, the “short wait” items below that, and then all available items. Netflix will often apologize for the delay and send a second disc from the available list to assuage what they assume is my broken heart. At one poin last month, I had two DVDs at home, one being returned to Netflix, and one being shipped. Not bad for a 1 at a time plan.

At least one person is benefiting from these delays, even a little bit.

More from The Consumerist:
- Weight Loss Company Sues Website For Posting Customer Complaints
- Netflix CEO Asks: Why Aren’t Cable Companies Paying Us?
- Minnesotans Only Have A Week Of “Tax-Free” Shopping Left On Amazon