If you want to get attention on a college campus what do you do? Posters get lost on overcrowded bulletin boards, chalk washes away when it rains, and even e-mails fall into the spam filters these days. Instead, as any enterprising student knows, nothing can be better than a big banner across the university's main gate.

At Yale, banners across the Noah Porter Gate in the center of campus have been a symbol of the vibrant student life. Colorful and eye-catching, they would advertise everything from a cappella concerts to cultural nights, and in our hyper-busy world, they were the perfect way to reach out to the entire campus community. But this year, after a new set of warnings and fines from Dean of Student Affairs Edgar Letriz, our long tradition of banners across campus has all but disappeared.

The administration has cited campus aesthetics as the primary reason for this new enforcement, but are banners really a problem? Isn't an active student life part of what makes Yale so special? Since when did our college architecture become reduced to some sort of museum object for college view books?

The cranes on cross campus, not the banners, seem like a bigger obstacle to me. Perhaps I should start fining Yale for each day that one of its blue tarps gets in the way of my appreciation of the campus and use the money to support student groups whose banners I find more appealing.

Practically speaking, this crackdown on banners may actually do more harm than good to the campus environment. In the first month of the banner ban, students seem to be using more flyers on already overcrowded billboards, which wastes paper, and chalking on all parts of campus, which is harder to clean up.

By far, the gravest consequence of the banner ban is the inhibition on our freedom of speech. It seems a bit ironic that we are encouraged to think outside the box in the classroom, but in the courtyard, we are confined to the bulletin board. 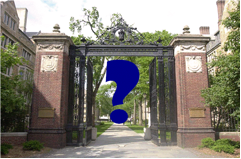 According to the Yale Daily News, the administration is considering allowing banners if they can find a way to prevent them from detracting from the campus's visual appeal. Yet the proposals they offer are absurd. The Head of Yale Recycling, CJ May, is quoted saying, "One idea is to have a contest to see what is the most aesthetically pleasing way [of using banners] ... Something like the slightly bent banners at Dunkin' Donuts or a row of flags on Cross Campus could be beautiful and allow students to be more expressive." Since when did we start comparing Yale University to Dunkin' Donuts?

As a public health columnist for my campus paper, I chose to address this issue in my column this week because freedom of speech is a fundamental precondition for progressive action. C-E.A Winslow, the founder of the Yale School of Public Health, describes the mission of public health as one of "organized community action." But how can we organize if we can't advertise?

In recent months, freedom of speech has come under attack at college campuses across the country. Last month, a student at the University of Florida was Tasered by the police for insisting on asking a long, political question to Senator John Kerry at a rally. Earlier this summer, the Supreme Court ruled against a student who put up a sophomoric sign that read "Bong Hits 4 Jesus." If school administrators are allowed to ban whatever does not fit into the expected aesthetic, then how can freedom of speech truly exist?

Last week, Nicholas Handler ('09) wrote in his prize-winning New York Times essay, "The Posteverything Generation" that "College as America once knew it -- as an incubator of radical social change -- is coming to an end." In the age of iPods, he suggests that the grounds of universities are not enough to incubate change and that, in the 21st century, activism will be relegated to the internet and the faceless digital world.

In 1969, Supreme Court Justice Abe Fortas, Yale Law Class of 1933, famously wrote in the Tinker v. Des Moines School District decision about students protesting the Vietnam War that neither teachers nor students "shed their constitutional rights to freedom of speech or expression at the schoolhouse gate." Forty years later, the Noah Porter Gate at Fortas's own university should be no exception.

This post is adapted from a column that I wrote for the Yale Daily News on Monday. The response from the administration? Silence...