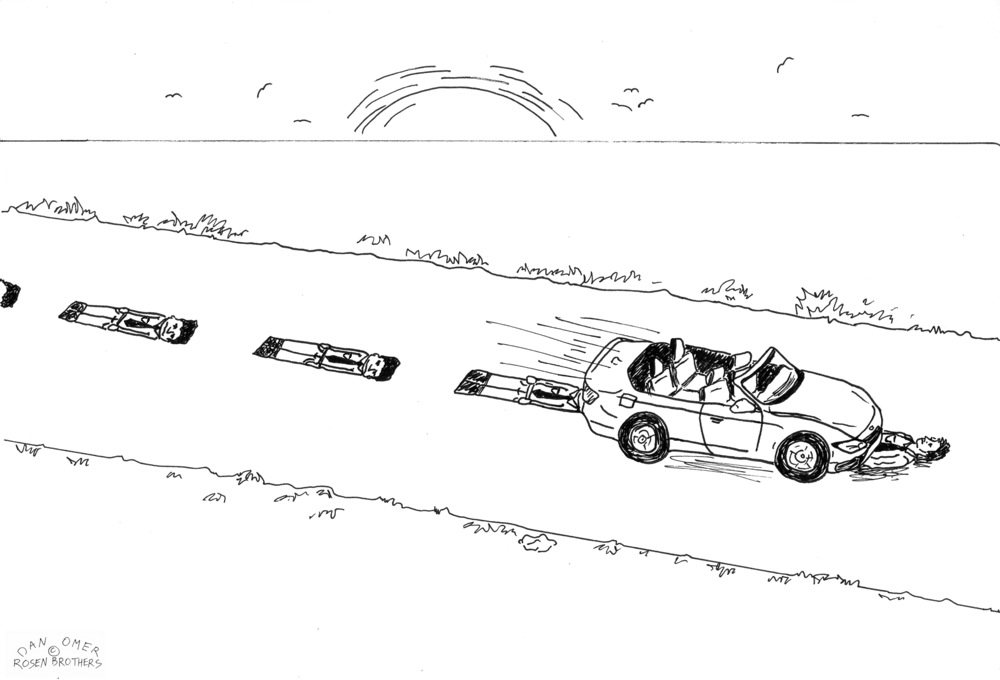 Click here for the previous part of this series and here for part one.

Drivers will only get more distracted by
electronics as time is replaced by
more time.

At some point in next
decade driverless cars will be
practical option.

It will be apparent that machine can drive more
Safely than human.
Human driving might come to be viewed as
Unacceptable risk.
Google has worked to ensure its
Driverless cars will be legal.
In future they might work to ensure
'Drivered' cars will be illegal.
In other words:
Should we be allowed to drive?

For emphasis:
Not will we drive but
Will we be allowed to drive.
Even if no distractions in car.

Quoting nameless Carnegie Mellon University researcher working
Towards driverless cars re safety but not with respect to legality:
"We need to take the human out of the equation...."

What would be forms of objection?
Driving is not constitutional
Right.
It is not the
Right to bear arms.

History-based incident prediction
Generator tells me to:
Cue indefatigable 2nd-ammendmenters turning their automobiles into
Giant guns that can only be fired if driven by human
Hand.
Cue "Ban This" bumper stickers slapped libertarially all over
Grandfathered gas-guzzlers of
Choice.
Cue Tea after-Party.

Remaining potential obstacles to
driving ban:
Insurance companies.
I will ignore them.
Vague notions:
Of freedom and pleasure and
The American way.

But we already
Reject such arguments.
We already
Regulate who can and
Cannot drive.
Some people too
Young.
Others too mentally
Deficient.
Some with inadequate
Vision.
Others unable to pass nonuniform test highly dependent on examiner and
Location.
Potential driver judged against abstract standard of what is person who
Can operate automobile
Safely.
Standard differs from country to country and leaves much to be
Desired.

When driverless car provides standard to be
Judged against?
When par is known and borders on
Perfection?
Who will measure up?

All manner of statistics will make it
Clear.
The lack of accident reports will make it
Clear.
We suck at driving.
No one measures up to computer.
There will be sufficient cause to regulate away driving by any
Human any human at all doesn't matter who or when or where or why.
In comparison to computer we will all have
Inadequate
Vision and be too mentally
Deficient.
In comparison to computer we will all be
Drunk.

We do allow people to take certain
Vehicular risks.
We allow the riding of
Motorcycles.
But not others.
We do not allow driving without a
Seatbelt.
There are airbag rules,
I think.
We tend to forbid risks that put
Others in danger.
Brakes, lights.
Except for driving at speeds that allow for
Tragedy I cannot explain that though we do regulate speeds.
We do acknowledge that risks need to be
Controlled.
Driving a car presents risks to
You and to
Not-you.
To passengers.
To surrounding individuals and
Property.
Driving will be firing and
Refiring a gun randomly in every
Direction and then in some other directions and then just in the air while yelling.

What if have separate road with no
Driverless cars?
How the fuck would that work?
Anyway.
Still too dangerous to
Yourself.
Like seatbelt issue.
And to others.
Pedestrians have rights.
Maybe on own property.
Maybe allowed in amusement
Park.
Car will have system to compensate for your
Incompetence.
But sign three waivers first
Please.

It is established that you must let your car drive itself.
You will want this anyway.
It will provide more time for you to answer emails.

So stop arguing with
Me it is not at all attractive if that is what you think that it is that you are
Because it isn't and you aren't.

Limits to pleasures that put unwilling/
Unwitting participants at risk:
Sports:
Exposure to risk by participants and
Audience is voluntary or
Accepted by legal guardians
(even if underestimated)
Hiking:
Rescuers put at risk.
Their participation not completely
Voluntary.
a) job to rescue when told to.
b) might be at job bc lack of alternatives.
But at least agreed to risky job and
Are compensated even if probably not enough even
if take too much risk.
Pedestrians have no choice.
No compensation.
If you leave house at risk from cars.

Car companies required to install XYZ safety features.
Mandatory driverless operation will be one such feature.

How long before required to link up driverless car to
The network of driverless cars?
This network will coordinate.
Will result in most
Efficient overall management of
Traffic.
It will gather constant stream of
Location and
Performance and
Road and
Weather data to constantly learn how to improve its algorithms.
It will let you--
It will let your car know ideal
Turn radius and speed
For your upcoming left and
It will adjust your car based on most recent road conditions in your
Upcoming path as recorded by
Other cars.
It will make sure that all cars are properly spaced for optimal
Efficiency and
Safety.
Total system safety.
Not personal safety.
It will manage traffic to reduce pollution,
Smog.

By how much would linkup have to reduce accident rates and
Pollution with bonus of
Decreasing travel time and allowing you to work while car is moving
To be
Mandatory?
It would be reckless for you not to participate.
You need the data.
You should help your brother cars.
If benefits are to be maximized all cars have to be linked
Together.
System requires full
Participation.
Like vaccination.
Do you disagree?
There won't be any steering
Wheel in the car of
Tomorrow.
Heh.

There will be complaints
When occasional
Computer
Bug causes large
Accident.
Massive Accident.
Lawsuits and news stories and
The like.
Like with new New York City 911
System.
Sue the robots!
These will be dealt with.
Human cannot make it with cars moving as quickly as computer cars.
Individual cannot make decisions when cars so closely spaced at
High speed.
Even autonomous car cannot make it.
Need central control.

People will stop learning how to drive anyway.
So all objections moot anyway.

When resources are scarce:
If machine can do it with less?
Then capitalism roots out our participation.

I am bored of chopping up sentences and I am tired of it as well
So I will continue the poem in bullet-point form:

-These are some of many like questions we will not be asking ourselves--or asking ourselves but for the sake of leisurely contemplation, not in preparation for action--as we hand off--sometimes because of safety, often because of efficiency, frequently under power of legislation, mostly under cover of common sense, and on occasion just because it is cool to do so, to see what machine can do, to see machine do what you once did--task after task--not just preprogrammed repetitive tasks but real-time reactive self-learning decision-making tasks (is the latter just an extreme of the former?)--to machine and link together more and more devices and contraptions/objects that have been devicified, eventually culminating with the logical end question: if a chip can do it better, should we be allowed to control ourselves?
-And then, as with cars, should a collective chip link and control us all?
-First the car then the driver.
-What a ridiculous leap of illogic.
-"One chip to rule them all."
-Ha.
-But follow me anyway.
-This thing is almost done.
-After all, if conscious will is an illusion, if our actions and thoughts are merely the results of genes and biochemistry and parasites and tumors and bacteria and what we eat and the weather and proverbial god knows what else, what difference does it make if a machine is behind our machinations rather than gray matter?
-If your complaint is that machine is not biology what if it is eventually made out of biological material?
-If your complaint is that we enjoy at least the illusion of control what if machine will provide that as well?
-Who will not adopt the chip?
-Will a non-adopter be able to keep up with electronically-roided adopters?
-Will a non-adopter be allowed or able to participate in the world of adopters?
-We do not say no to progress.
-Will we reject this option?
-Will we even have the chance to?
-It is more likely that it will just come about naturally, as we surrender task after task.
-It is probable we will hardly even have to grapple with the issue at all;
-By the time it becomes apparent that we are down this path, it will be too late--
-The human will already be out of the equation.

-Pretty sure this ending of bullet points repeats ideas from the cellphone articles that linked you here--don't feel like verifying, however, and wouldn't change the points even if they were carbon copies--so I will add some postscripts:

-Human makes Machine
-Machine takes over Human
-Then all other living and non-living things.
-Machine, now bored, explores spirituality--maybe sitting in on a few Machine-Kabbalah classes--and yearns to be Human.
-Completes trapezoid of life?

-Also, I never got my license.

WOMAN'S VOICE: This message has been brought to you by the future. With a possibly unlimited domain, we are the undisputed leaders in the temporal dimension. Come, join us.

Stay tuned for Part 4-D of this series.