Last week, the Department of Defense Inspector General (DoD IG) released a report of its investigation "into the compliance by the Armed Forces with the elements of such regulations on adverse personnel actions, discrimination, or denials of promotion, schooling, training, or assignment for members of the Armed Forces based on conscience, moral principles, or religious beliefs." Yeah, that's a mouthful. So, what exactly was it that the DoD IG was investigating, and why was this investigation called for? Well, the investigation was required by the National Defense Authorization Act (NDAA) for FY 2014, as part of a so-called "religious liberty" section pushed for by the religious folk in Congress who have been trying to do everything they can, via legislation and changes to military regulations, to reverse the protections granted to LGB service members through the repeal of DADT.

There are other things covered in the DoD IG's report, such as compliance with regulations regarding various religious dietary and appearance accommodations, and in those areas the investigation did find that there was some need for improvement. But there was one area in which the DoD IG found no evidence of any problem.

Despite the alarmist claims from the religious folk in Congress that the poor, persecuted Christian military chaplains are being forced to perform services contrary to their religious beliefs, the investigation found no evidence of this, saying:

"we identified no instance in which a commander forced or attempted to force a chaplain to perform a service contrary to his or her conscience, moral principles, or religious beliefs."

Yes, the claims that military chaplains are being forced to promote the so-called "gay agenda" and will be forced to perform same-sex wedding ceremonies are as completely unfounded and ridiculous as the similar tales of ministers in the civilian world being forced to perform same-sex wedding ceremonies under threat of legal punishment. No military chaplain has had to do anything, or will ever have to do anything, that is contrary to their beliefs.

But, while being forced to promote beliefs contrary to their own is a made-up problem when it comes to military chaplains, it is actually a very real problem for other service members, and a good example of this also came up last week, the day before the DoD IG's report was released.

Last Tuesday, seven airmen at Cannon Air Force Base in New Mexico contacted the Military Religious Freedom Foundation (MRFF) about an email they had received from their chain of command promoting an evangelical Christian "Gospel Explosion" event. 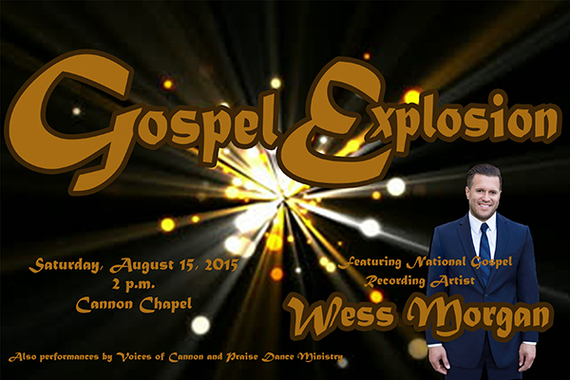 The seven airmen, six of whom are Christians, immediately recognized this email as a violation of Air Force Instruction 1-1, section 2.12 of which says that "leaders at all levels":

"must ensure their words and actions cannot reasonably be construed to be officially endorsing or disapproving of, or extending preferential treatment for any faith, belief, or absence of belief."

Distributing a flyer promoting an evangelical Christian "Gospel Explosion" through the command's email distribution system is a blatant violation of this Air Force Instruction. The "leaders at all levels" in this email distribution chain were absolutely officially endorsing and extending preferential treatment for the Christian faith by using this email distribution system to distribute this flyer. Not only did the end recipients of the flyer receive it from their immediate superiors, but any airman in the chain who was told to distribute the flyer to their distribution list was being told not only to violate regulations, but to promote a religious event that might have been contrary to their beliefs by sending the flyer on.

It is just fine for the chapel to hold an event like this "Gospel Explosion," but as MRFF president Mikey Weinstein pointed out a few days after being contacted by the airmen at Cannon Air Force Base, a religious event can only be promoted by the chaplain's office. It can't be promoted by any leaders at any level, as then-Chief of Staff Gen. Norton A. Schwartz made abundantly clear in a 2011 memorandum:

"Although commanders are responsible for these programs, they must refrain from appearing to officially endorse religion generally or any particular religion. Therefore, I expect chaplains, not commanders, to notify Airmen of Chaplain Corps programs."

But it doesn't matter how abundantly clear this simple point is made. There are those who will blatantly disregard it, and there are other who just don't get it, like Lt. Erin Recanzone of Cannon Air Force Base's public affairs office, who told the Clovis News Journal, in an article that was subsequently picked up by Stars and Stripes, that commanders promoting a religious event was no different than them promoting a standup comic or a golf tournament. Seriously, she really said that. From the article:

"Lt. Erin Recanzone of the base's public affairs office said the 'Gospel Explosion' flier was distributed in the same manner as one for any activity at the base, like a standup comic or a golf tournament."

And that is why the founding fathers put those standup comedy and golf tournament clauses into the First Amendment, right Lieutenant Recanzone?

Below is an image of the actual email thread forwarded to MRFF showing how the promotional flyer for the "Gospel Explosion" was distributed through the ranks to every airman in the command.

Getting the word out as instructed, the flyer is then obediently forwarded to all the "shirts," or First Sergeants, by none other than the man just named the Air Force Special Operation Command's 2015 First Sergeant of the Year, Master Sgt. Marvin Jimerson, Jr. As you can see, First Sergeant of the Year Jimerson's email is addressed to a "First Sergeants (Distribution List)" with the message "First Sergeants, Please disseminate within your units." And disseminate they do, as you can see from the final email in the chain, addressed to "318 SOS ALL (Distribution List)." And every airman on the other SOS, or squadron level, "ALL" lists, of course, got the email from whoever is right above them in the distribution chain. 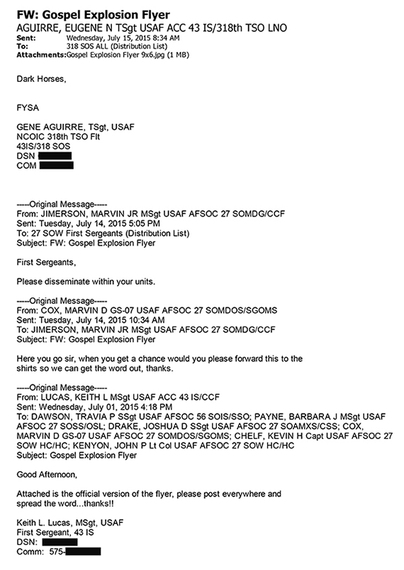 And it is at this point that recipients of such an email start contacting MRFF. Why? Because they were just "encouraged" by their chain of command to attend a religious event and, apparently unlike those higher up on the food ... um ... email chain, they know that this violates regulations.

And that is the reason for AFI 1-1's clear directive that "leaders at all levels ... must ensure their words and actions cannot be reasonably construed to be officially endorsing or disapproving of, or extending preferential treatment for any faith, belief or absence of belief." Is this really that hard for the leadership at Cannon Air Force Base to understand?