A flier distributed after Wednesday night's General Assembly meeting in Zuccotti Park read like a manifesto issued by the Black Panthers, the Young Lords or the Weather Underground: "From America to Asia, from Africa to Europe, people are rising up to claim their rights and demand a true democracy."

But as rapper and activist Ness, of the rap group the A-Alikes, read on, it became clear this was anything but a 10-point program. This was a leaflet circulated at Occupy Wall Street, a protest movement that has been criticized as overwhelmingly populated by young white people, despite being headquartered in one of the most racially and ethnically diverse cities in the world.

In the four weeks since it began, Occupy Wall Street has drawn the attention of elected officials and presidential candidates, and even Wall Street executives. But as the protests have spread to more cities, participants have remained overwhelmingly white -- even in some of the country's more diverse places.

Now, one group that's dubbed itself "Occupy the Hood" is trying to change that. The mostly online initiative is nearly a month old, and its organizers are working to bring more people of color and their concerns to the Occupy Wall Street movement.

Malik Rahsaan, an African American New Yorker and full-time substance abuse counselor who has become a frequent visitor to Occupy Wall Street's Zuccotti Park headquarters, and Ife Johari Uhuru, a black hairstylist from Detroit, are the driving forces behind Occupy the Hood.

"The Black people I know have a practice: When we see each other in public places, we give each other a nod, just a polite, silent 'hello, what up, I see you,'" said Rahsaan. "The first time I went down to the Occupy Wall Street thing in Zuccotti Park, I tell you, there was no head-nodding. There were no black people at all."

Rahsaan said foreclosures and job loss are rampant in his community of South Jamaica, Queens. His 17-year-old daughter is weighing the choice between joining the military or taking on a lot of student loan debt to pay for college.

"That's just unacceptable in the richest country in the world," Rahsaan said. "But that's what's going on in a lot of communities where black and brown people live. That's why if something is going to come out of Occupy Wall Street, I would hate for those kinds of struggles not to be a part of what gets addressed."

"This is not a break-off movement. It is not a competition," Uhuru explained by phone from Detroit.

Uhuru insisted she can't and isn't trying to speak for everyone who's been drawn to Occupy the Hood, but pointed to her own chief concerns. She said she's deeply troubled by plans to summarily reduce lifetime limits on welfare assistance in Michigan. And she has been distressed to learn that Wall Street firms, such as JPMorgan Chase, make money administering access to food stamp, welfare and Women Infants and Children program benefits, as well as unemployment and child support payment in several states across the country.

Like Occupy Wall Street, Occupy the Hood got its start online with a call to action. Rahsaan created the group's Facebook and Twitter accounts, then wrote a mission statement in the wee hours of the morning on either Sept. 17 or 24 -- he can't remember which.

Late Thursday, Occupy the Hood had 5,989 followers on Twitter and 4,817 people had indicated that they "liked" the idea on Facebook. Spin-off Occupy the Hood Facebook pages for groups in Austin, Texas; Washington, D.C., Atlanta, Seattle, Philadelphia, Chicago and other cities have also emerged on Facebook. By comparison, the Occupy Wall Street accounts have amassed just over 67,000 followers on Twitter and 194,000 "likes" on Facebook in a little over a month.

While Occupy the Hood has, at least online, captured the attention of young people of color with a range of economic concerns, it is also facing some of the same criticism lobbed at the movement it's trying to diversify.

"It's definitely being recognized among organizers, some of your best and most seasoned organizers," said Roderick Douglas Bush, a professor at St. John's University in Queens who studies social movements and inequality. "The question is whether this is the way to do outreach."

Bush said there has been some "scuttlebutt among some of the longtime organizers: 'Well, they didn't contact us. They didn't come see us. What are they trying to get done?'"

Ness, the rapper, said he has consulted with several seasoned black activists and attributes the limited presence of non-white protesters at Occupy Wall Street to the belief held among some more radical black activists that whites should never be the vanguard of a social movement of poor or working-class people.

"Basically the economy in general got fucked up enough for other layers of society to feel it -- what we've been feeling since we've been here," Ness said. "That layer, the middle class and whites still have that sense of entitlement, that sentiment like, 'This can't be happening to me.'"

Still, Ness said the Occupy Wall Street movement deserves respect because it has achieved a greater level of attention and wider support than other protests he has taken part in or witnessed first-hand. The flier he had collected in Zuccotti Park gave dates and times for meetings, listed mass marches planned against downtown banks and identified a group that plans to congregate in Times Square in New York on Saturday. He read the flier's final note on the meaning of the Occupy movement: "Now it is time for all of us to join in a global non-violent protest."

"I don't want to short-change what has happened here. This has never happened in my lifetime. Because of that, I don't want to get caught up on intangibles," Ness said. "I like that fact that the conversation is about radical change. This is new."

One real-world test of how well recruiting efforts like Occupy the Hood have worked will come in Detroit, when Occupy Detroit gathers for its first protest and occupation on Friday.

"We are all living in an unstable and unjust economy," Uhuru said. Now that the problems associated with that have spread beyond our [non-white] communities, these issues are finally getting some attention." 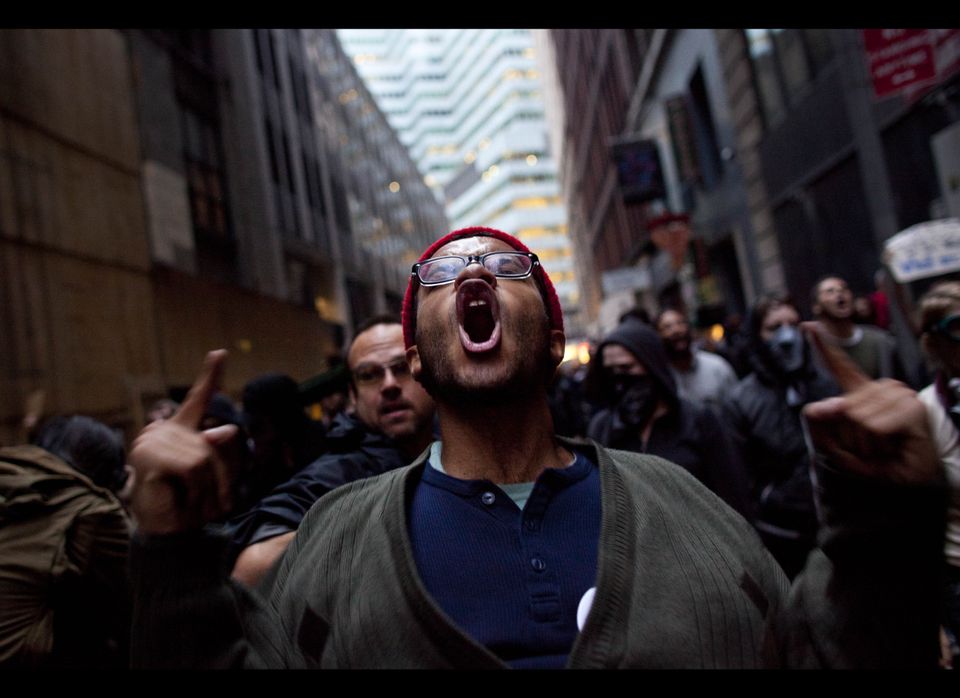 1 / 9
Occupy the Hood
A protester participating in the Occupy Wall Street protests screams while marching towards Wall Street Friday, Oct. 14, 2011, in New York. At least ten people were arrested during the march, which began after protestors heard the news that the owners of Zuccotti Park had withdrawn their request to have the park cleaned by the New York Police Department. (Andrew Burton, AP)