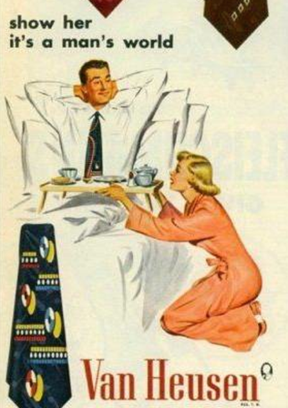 I have had an epiphany. Maybe you understood this all along. It just became clear to me. My epiphany makes the "double bind" perfectly understandable. Unacceptable today - but understandable!

I call myself an expert in both generational and gender differences in today's workplace. I have written and done a couple of workshops on the "intersection" of gender and generational differences. The epiphany came as I prepared a recent workshop on this topic.

In these workshops, we identify what women in general share with each generation and how intergenerational tensions can be different for women than men (in general). First, we go through each of the four generations in today's workforce. We look at what was going on for women in the formative years of each generation (the first two decades of life). Although there was obviously overlap in the cultural influences that shaped the four generations, we can generalize that:

• Traditionals were in their formative years during the 1930's or earlier through the 50's. In these years, most middle class women were homemakers; women who worked outside the home (except for a brief workplace appearance in the 1940's of "Rosie the Riveter") tended to be secretaries, teachers or nurses.

• The formative years for early Baby Boomer were the 1950's through the early1980's. Many Boomers in their first decades saw women in the same roles as Traditionals had seen them - and then saw "everything change." The advent of the birth control pill gave women more choices. They divorced; and they went to professional schools and joined the business world in large numbers for the first time.

• The bulk of members of Generation X were most influenced between the mid-70's through the 90's. Gen Xr's saw women moving up the ladder. Their mothers were working and professional women. They grew up expecting that women had choices.

• Millennials' formative years were from the early 1980's through the present. Millennial boys grew up with girls as friends and competed with girls in school and for jobs. They had women bosses and saw women in high office, including 24 women CEO's in the S&P 500 and three women Secretaries of State.

When I put up images of the roles and expectations for women during each of these time periods, my epiphany occurred. For Traditionals and early Boomers, the image was the one on this article - women as subservient in a "man's world." For Millennials, images are of Hillary Clinton, Mary Barra (CEO of GM) and many other powerful women. WOW! What a change in less than 60 years!

Naturally our definitions of leadership are gendered. Until recent history, leaders were men - so, of course, leadership has been defined in masculine terms. It is understandable that we are confused about what we expect of women, especially women in leadership. That is what underpins the "double bind." It is no wonder that we have been slow to see feminine behaviors (like collaboration and making a point with a question) as leadership behaviors. It is no wonder we still judge a woman who uses masculine styles at work.

I don't like it that women are "damned or doomed" depending on whether they choose a feminine or masculine style of achieving results. I still want men and women to recognize the unconscious mind-sets - including the double bind - that create obstacles for women reaching their potential. But my epiphany gives me greater understanding. And it gives me hope that the passage of time - and having Gen Xr's and Milliennials in charge -- will open the doors for gender diversity in leadership.