As stock markets around the world have plummeted lately, you’d be forgiven for barely noticing a related and hugely important economic development: The price of oil has fallen even more than U.S. stocks, and gasoline prices are following.

That is both good news and bad news for consumers and the economy. Prices are falling partly because of worries about a global economic slowdown. And yet Citigroup estimates that the fall in oil prices adds up to a $1.1 trillion stimulus for the global economy.

Crude-oil prices have dropped more than 8 percent in the past week, while the Dow and S&P 500 have each fallen about 6 percent. In the past three months, oil has fallen a little more than 22 percent and is now approaching $80 a barrel for the first time since 2010. 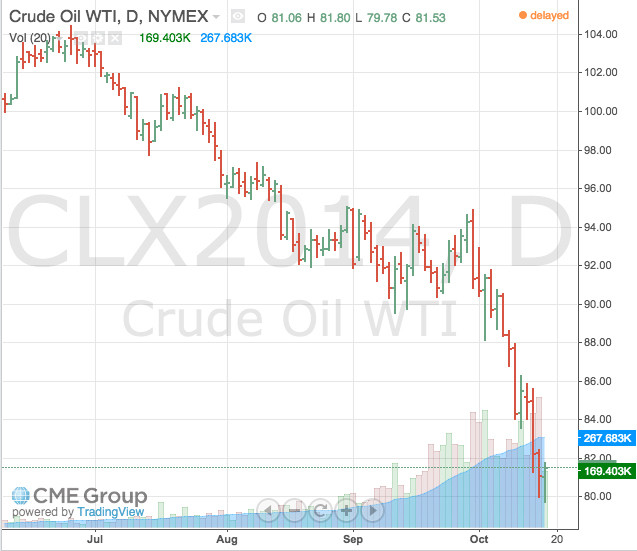 The fall, the Wall Street Journal reported, is partially due to a U.S.-driven boom in oil production. That boom, combined with deepening worries that a slowing global economy will mean lower demand, means lower oil prices.

So the bad news is that falling oil prices seem to be very much part of the same economic fears that are pushing stocks lower.

On the other hand, lower oil prices may help rescue the very economic growth people are worried about. It will at least be a bonus for consumers. As Yahoo Finance’s Aaron Task succinctly put it, falling oil prices are “good news for pretty much everyone other than energy producers and their shareholders.”

The average price for a gallon of gas in the U.S. is now $3.16 and falling, according to AAA. That's down from $3.38 a month ago. And nearly a third of U.S. gas stations are selling gas for less than $3 a gallon, according to AAA.

This is, in effect, consumer-spending stimulus: Lower gas prices mean more disposable income for American households. The New York Times, citing energy expert Tom Kloza, estimated that the average household will see “annual savings of $120 for every 10-cent drop in the price of gasoline.” Those savings take some time to work their way into Americans’ pockets, but are significant nonetheless.

Dean Baker of the Center for Economic and Policy Research thinks that even as the U.S. economy struggles, dropping oil prices are a good thing, even if they push too-low inflation into far-scarier deflation:

If we have a mortgage debt will it be harder to repay our mortgage now that we have to pay less to drive our car or heat our house? If companies are thinking of investing in expanding a factory or new line of software will lower energy prices and possibly lower long-term interest rates make this less likely?... If we exclude the situation of commodity producers, this is a positive for the economy.

So if you can muster the sympathy, pity the oil man, along with Vladimir Putin, whose “best friend,” Bloomberg writes, is high oil prices.

For the rest of us, the bad news is that oil is falling just like the stock market. The good news is that falling oil prices can help keep things from getting worse.