Last week saw the launch of the new ABC sitcom Work It, in which two unemployed straight guys dress up as women in order to get work. Where have we seen this before? Exactly: the series is essentially a remake of the '80s sitcom with the chipper and not-so-ambiguous title Bosom Buddies -- a kind of Tootsie meets The Odd Couple.

Cross-dressing and comedy go hand-in-hand in all cultures and have for centuries; incidentally, so do cross-dressing and tragedy. From the Ancient Greeks up until the time of Shakespeare, every woman's part was performed by a man.

Still, in this time of sexual hypertension in the United States, Work It stirs up much controversy. In conservative and religious quarters the depiction of heterosexual men in women's clothing is viewed as a direct assault on societal norms and "family values." Within the LTGB camp protest is made against yet another farcical portrait of transgender people, and there is concern about the increased transphobia that this show might stoke.

How different was the response in the Netherlands to the Christmas show Ollie Hartmoed's Palace of Draperies, a show I wrote and which was directed by my spouse, Norbert ter Hall, and in which a transgender character also plays an important part?

The national, public broadcasting channel in the Netherlands broadcast Ollie Hartmoed's Palace of Draperies between 7 and 8 p.m. during the four last Saturday evenings of 2011 -- the time slot reserved for family-oriented, and particularly children-oriented, programming. The show tells the story of the 9-year-old Ollie Hartmoed, a sensitive boy with an encyclopedic knowledge of draperies and an impossibly complicated family. His father is onto his third marriage -- and second brood; his mother moves in with her new boyfriend, by whom she is pregnant; his grandpa and grandma separate in retirement; and everyone is fighting with everyone else. When Ollie's 99-year-old great-grandfather expresses the wish to have the entire Hartmoed family together around the table for one last time for his 100th birthday, Ollie's impossible mission to reconcile his torn family starts. 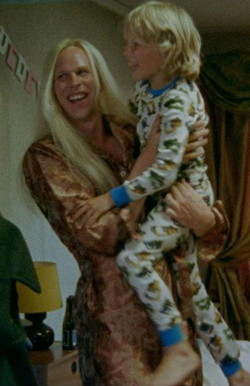 Ollie's supporter and confidant is his half-sibling Julius, a transgender woman who struggles with her gender identity and is now exploring her female side. While Julius is a comic character, we show her personal journey -- and choice of dress -- with dignity and respect. To Ollie's observation that he will now loose his brother, Julius responds that she has always been Ollie's half-brother, and that perhaps the other half was his half-sister. In other words, their bond will stay the same.

For Norbert and me it was important to make this show. In this day and age, when so many parents separate and find new partners, and new forms of relationships appear, children have to relate in different and new ways to the people around them who care for them and love them. Since the birth of our niece and godchild Katy nine years ago, we have fulfilled the father role her; she started calling us both "Papa" when she was a toddler and considers it completely normal to have two fathers whom she does not live with, and who are actually her uncles once removed. Family is incredibly important to children, but the concept of "family" is much broader for them than in the classic sense.

That the show had broad appeal became clear from the ratings: among the primary target audience of 6- to 12-year-olds, Ollie Hartmoed's Palace of Draperies reached a market share of over 35 percent. The reviews were uniformly positive. Not a single critical note was heard from either religious or conservative quarters, nor from the LTGB community.

Was there no commentary whatsoever on the appearance of a transgender character in a family show? Yes, indeed. One columnist in our liberal-left evening paper NRC Handelsblad wrote in this regard:

The explicit focus on unusual social phenomena (ranging from a transgender half-brother to constantly alternating families) as remarkable is almost a trademark of Alberdingk Thijm. It is a matter of taste whether one considers this refreshing or rather noting the obvious in a society that in reality has moved along much further in the acceptance of new forms and thoughts. I lean toward the latter.

That is the opposite side of the spectrum, diametrically opposed to the hyperbolic reaction in the U.S. to Work It -- but perhaps equally repressive: in our little liberal paradise almost everything has been taken care of socially and legally for LGTB people, so stop bothering us about that.

Ironically, Henk Krol, the former editor in chief of the Gay Krant, declared that same week that the emancipation of LGBT people in the Netherlands had been completed. It sounds like Fukuyama's proclamation of the end of history.

That we in the Netherlands have only known equal rights to family life for LGBT people for a very short period of time is quickly forgotten, just as is the fact that Dutch civil servants may conscientiously object in order to be exempted from officiating at a non-heterosexual marriage. And here we are speaking of the Netherlands, a country the size of a postage stamp with not even 17 million inhabitants.

By illustration, the VRT, the public broadcaster of our neighbor Belgium and co-producer of Ollie Hartmoed's Palace of Draperies, cancelled the planned broadcast of the show on their children's channel Ketnet, due to the "explicit depiction of social issues." Instead, the show is now broadcast on the adult channel, hidden away on poorly viewed Sunday afternoon.

As long as we are granted a stage to show with balance and integrity how valuable it is that people are different, we will continue to do so, regardless of disapproval from one side or indifference from the other.