When I started doing yoga, I loved most of what happened in the classes. One thing I did not love, though, was the chanting of "om." None of my early teachers could explain what it meant or why we were doing it. It felt cult-y and confusing.

Eventually, that frustration led me to try a different approach. Instead of thinking about the meaning, I decided to just listen to it. And in those first moments of non-critical listening, I started to finally get it.

The sound, called pranava in Sanskrit, starts outside and ends inside, much like yoga practice itself. When making the "O" sound, there is no palpable boundary between the sound inside the mouth and the sound outside of it. Inside and outside seem to mesh, just as yoga philosophy tells us our mind tends to do before we learn to still it. But, then, as the sound transitions to "M," it begins to be felt inside the body with closed lips clarifying the border between inside and outside. Then, after each repetition, there is silence, which begins inside, where the "M" ended. The process of repeatedly shifting focus from external to internal eventually shows the practitioner the infinite that lies deep inside, beyond thinking, beyond sound and even beyond silence.

Phonetically, there are four parts that make up pranava. The "O" part of "Om" is made up of "A" and "U." However, they combine, or monophthongize, to make the "O" sound. Occasionally, you may hear people pronounce the A and U, but they are taking too literally the components of the final sound, which has always been "Om." Individually enunciating the "A" and the "U" is akin to pronouncing each of them separately in a word like "pause". 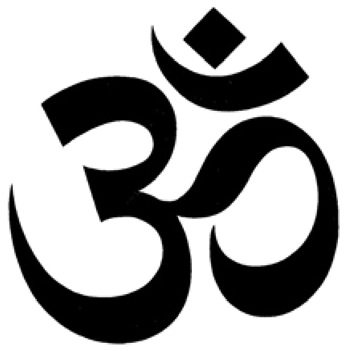 Omkar is the name of the character that represents pranava. It can appear with slight variations, depending upon the script being used, but its universal, older representation, seen here, is comprised of a set of three joined curves, above which hovers a fourth curve, and a dot. The lower left curve represents "A," the curve on the right is "U," the top left is "M," and the dot is the silence after the sound. Each of those five elements graphically expresses the path of the yoga practitioner toward the reliable and enduring happiness that can exist within the context of a human life.

The lower three curves represent three stages of the human mind's progression from ignorance and suffering to clarity and happiness. The dot above represents the infinite true non-ego self, the source of the happiness. Separating the dot from the three lower curves is a horizontal curve, which represents maya, Sanskrit for the illusory quality of the world of things.

Here is a breakdown of the whole thing.

The Bottom Left Curve: The A That Begins the O Sound

This curve represents the moving mind and it is the biggest one because this is where most of us are almost all the time. The open shape of the curve and its tapered form indicates that it's hard for us to know, when the mind is moving, where the permanence of true self ends and where the impermanence of worldly things begins.

In that confusion, we tend to misidentify with possessions or relationships when, in fact, those things are not really who we are. That misidentification is the source of painful experience and harmful behavior. So, at some point, it's likely that the suffering will lead one to try to find a better way. That quest is what the next curve, on the right, is about.

The Right Curve: The U That Finishes the O Sound

This curve represents yoga practices, all of which are variation of the same thing: trying to focus on one thing at a time. Stilling the mind's muddying ripples clears up our view of the vastness that underlies thought and ego. This curve is almost a closed circle. But, there is a little gap, which represents one of the main pillars of yoga practice: the practice is not about disappearing from the world. Rather, it's about redefining it while engaging and experiencing it.

My teacher used to say, "To become enlightened, go to the marketplace." By being in the world, but not letting it get you down, you really learn how to live above it all, yet in it all. That is why the curve is not quite a closed circle, much like the mouth, which is not quite closed when it finishes up the "O" sound before closing to say "M." Repeating the practice that this element represents allows you to go back into the world of activity and things, and see it differently, which is what the next curve is all about.

The third, top left curve represents the mind as it is after the second curve's re-structuring of identity so that we recognize the true self. This state of clarity and freedom from injurious desires is called vairagya, or non-attachment, in Sanskrit. Now, the world and its things can be experienced without the suffering that is inevitable when identity is based upon them.

Here the curve is open again, as in the first curve. But, this time, it does not taper. There is a clear line between what is inner, formless self, and finite, changing, external and manifest non-self. The curve is open to experience, but it knows where true self ends and ego-self begins. That clarity makes visible the meaning of the dot at the top of the symbol.

The Dot: The Silence After the Sound

The dot represents that infinite non-thing that spiritual aspirants seek. In Sankrit, it's called isvara (pronounced ish-wahr'-a). In the context of yoga, it is representative of the drop of the infinite that is within each being and which is indistinguishable and inseparable from the infinite that underlies every thing in the universe.

Graphically, the placement of the dot is important. It lies outside the set of curves that represent the human mind, yet, the way to see it is by looking inside the mind itself. Yoga can be accessible to anybody because we use what we've got: the mind and, sometimes, the body, to find the ultimate non-ego self, which is neither body nor mind. The three curves at the omkar's base represent the thinking and feeling self, with whose identity comes all human suffering ... but the mind is also the single most reliable source for finding one's true, infinite self. The body and mind can be stairways to pain or ladders to freedom, depending upon on how they're used. To get to the dot, we use the three lower curves.

The horizontal curve is like a two-way mirror. It represents the illusory way that living among things prevents us from seeing the deepest reality. When we look outside for the infinite, we only see our ego self reflected back at us. The potency of the graphics here is poignant in how simply it represents our failed attempts to find happiness outside, in material possessions, relationships, alliances, and behaviors. When we look to those things for happiness, we only see a reflection of more things.

Instead, the symbol invites us to look inward. By going inside and ending identification with thoughts and things, we see what underlies them. By looking into the the three things that the lower curves represent, we finally see the dot at the top: real self.

This curve tapers where it separates the top dot (infinite) from the previous curve (non-attachment to experience). That is because, once that clarity happens, we see what has been true all along: experience and the infinite are ultimately inseparable. The "A", the "U", the "M", and the silence are all one.

While it may be helpful to understand the meaning of the character, there is likely greater value in simply making the sound while listening, following its path and then being with the silence, then doing it again. Try it and see if it works for you. If it doesn't, then do what the ancient yogis and the best yoga teachers suggest. Try something else.

Without giving myself the freedom to not chant, I would never have found my way to understanding, finally, what chanting is all about.