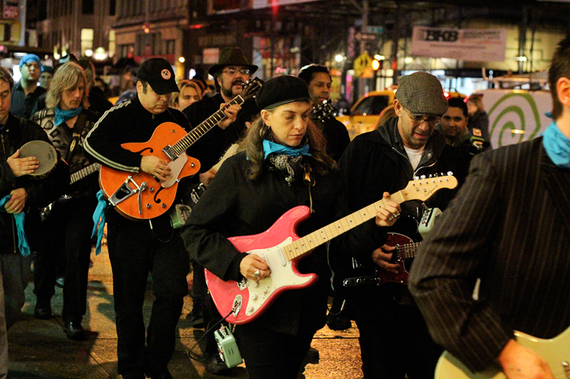 Joan Torres' All is Fused sextet brings a funk edge to bebop-inflected bossa nova. The sound is both familiar and pushing the boundaries of the genre. Torres, the bassist bandleader grew up in Puerto Rico but now lives in San Francisco where he recorded his new album, "Of the Musical." There's a strong contemporary sensibility that brings to mind artists like Brad Mehldau and The Bad Plus who play jazz like people who grew up listening to Radiohead. While he doesn't delve into popular music covers, Torres melds repetitive melodic structure with expansive improvisation. The is most evident on the opening track which begins with a fast paced bossa nova line for piano and bass. About a third of the way in, the groove tightens around a simple driving riff. You might find yourself turning up the volume on "Stream of Melancholy" or being especially still to hear its quiet beauty. The closing track "Unleashed" builds on intimate solo bass grooves to create a sonic quilt of rich musical impulses.

It's probably not a surprise to learn that Post Death Soundtrack's macabre songs contain references to dark passengers and feel like séances. It's a particular audience that will be drawn to this intensity that dwells in a hellish landscape of a mythical underworld. The music that accompanies these images is often dense and foreboding, but there are moments on the album "The Unlearning Curve" that surprise. "Dance with the Devil" turns out to be a haunting ballad that brings to mind recent Nick Cave songs. The final track "Transform in White Light" opens with "you've searched for answers and found only fear." It's not an encouraging sentiment to encapsulate a journey, and yet it seems to be an indictment of the current populist wave in the US and Europe. The refrain built around the title forms a mantra that is as close to uplifting as Post Death Soundtrack gets.

When I began listening to Marla Mase's new album "Miracles - Lost and Found," it reminded me of the candy-coated post-punk of The Pixies and Yeah Yeah Yeahs. This shines through particularly on the track "Dreamland," which is propelled by an airy, irresistible hook. Just when a thematic structure begins to form, the album takes a divergent path that makes categorization futile. "Gun" carves a darker groove with paired down lyrics that paint a vivid picture of gang violence. Its sparse structure imbues the song with a dynamic clarity. The jazz dirge "56 Trees" laments the preparations for Fashion Week with a cool lullaby lull - the trees the title refers to are cut down to make room for the event's massive tents. A two-part spoken word track, "Back to the Beginning" veers into a confessional monologue while "Everyone Dies" is a Goth screed directed at Facebook. The Brooklyn-based musician's background in theater can be felt in the dramatic intensity that pulses throughout the album. She even articulates, "now is the time we must say goodbye" in the opening of the final track, "Always." It's as if she's personally leading us through the soundscape of her psyche, seemingly random at times but deeply felt.

Tilted Axes is the moniker for the classically-trained art rocker Patrick Grant and a call to arms for the guitar orchestra he assembles for street performances. The instrumental tracks on his new album, "Music for Mobile Electric Guitars" are tightly-woven powerhouse compositions that alternate between shredding solos, rhythmic riffs, and more expansive soundscapes. Grant, who studied at Julliard and worked for classical minimalist pioneer John Cage, is a musician in complete control of his instrument and to listen to him rip loose on tracks like "Beaubien Blues" is a real treat. With almost a dozen guitars along with drums and bass, this wall of sound makes a powerful argument for maximalism. If Bach grew up playing the electric guitar and listening to Led Zeppelin and Mahavishnu Orchestra, he might have sounded like Patrick Grant. Come to think of it, I would love to hear Grant record his take on the Goldberg Variations.

Matt Townsend's voice exudes a warmth that's reminiscent of Harry Chapin, but if you listen closely, his lyrics can have a biting criticism more in line with the pointed fury of Bob Dylan. The drummer, Bill Berg, who played on Dylan's "Blood on the Tracks," keeps the beat on Townsend's new EP "The Drifter and the Dream Part One." Recorded in the singer/songwriter's hometown of Asheville, North Carolina, the album's five tracks express a breadth of creative impulses. The opener, "The Great American Madness" rages against the entrenched racism woven into our country's history along with the industrial military complex. Framed as a long explanation of the title's diagnosis, weighty lines like "it builds a brand new enemy to sell the same old war" flow with rhythmic ease. The middle two tracks suffer from a lack of specificity, but Townsend finds his voice again on the scathing "Freedom is Calling" with a rousing refrain, "rise up!"